Looking beyond the usual suspects, Texas, Washington, and Colorado lead among states for deal activity to venture-backed companies.

Three established startup hubs on the west and east coasts — California, New York, and Massachusetts — still account for a disproportionate share of investment to VC-backed companies in the United States (roughly 75% according to our newest quarterly VC trends report).

It’s not just small startups that are being established outside of California, Massachusetts, and New York. The states sometimes known as “flyover states” are also home to some of the US market’s unicorn startups valued at $1B+, including Domo and Qualtrics in Utah, and Uptake Technologies and Avant in Illinois.

We used CB Insights’ analytics to peel back the data on funding and deals to VC-backed companies in these states, including deals and dollars financing history, investment stage trends, and top states by deal activity.

In 2015 year-to-date (YTD) through 11/10/15, there has been more than $14.6B invested across 1,406 deals to these 47 states and Washington DC, putting the year roughly on track to equal last year’s funding total. However, deal activity fell to a a three-year low, indicating that deals are getting larger even as deal count decreases. 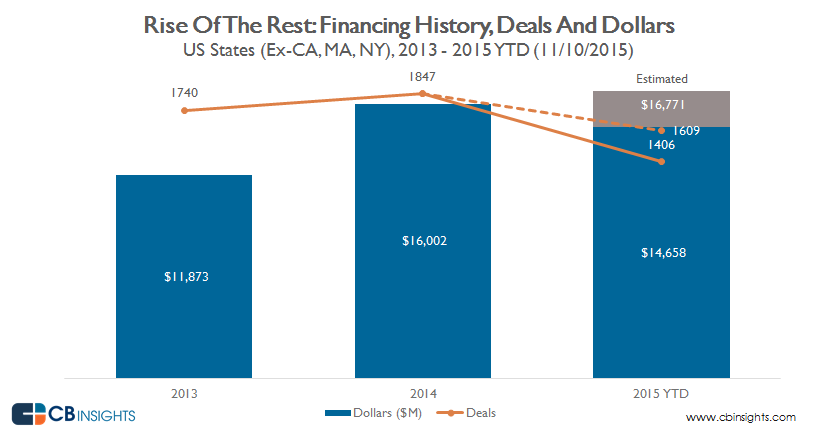 In the three years analyzed below, VC-backed companies in the internet sector accounted for at least 40% of deal share in the 47 states and Washington DC. The healthcare sector also accounted for a large share of deal activity, ranging between 18% to 20%.

Mobile and software fundings accounted for 13% and 7% of deal share respectively, while deal activity in the industrial and computer hardware sectors remain scant. 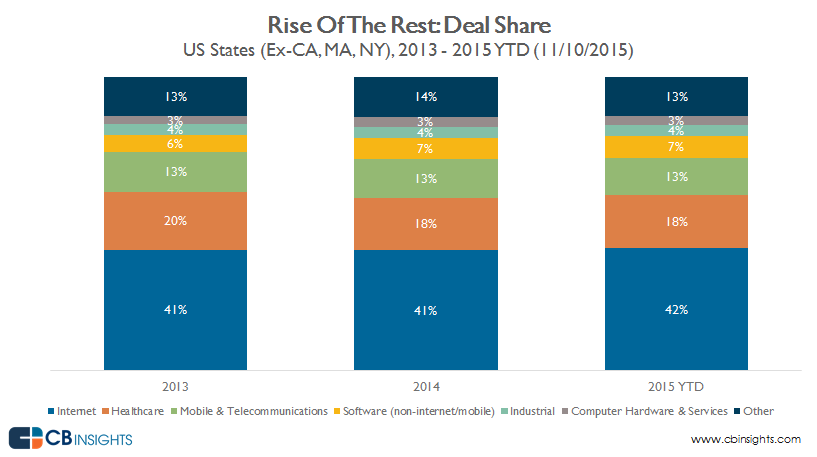 Software investment spiked in 2014, but fell to 6% dollar share in 2015 YTD. The Industrial and computer hardware sectors remain a small portion of the dollars put to work in these states. 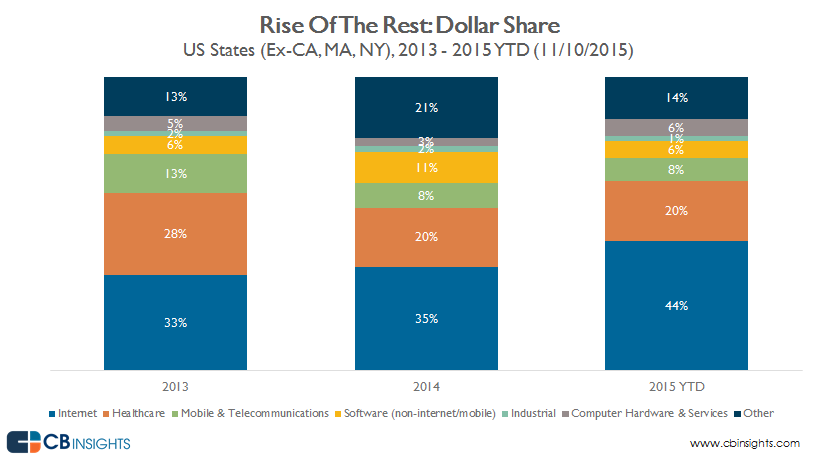 Below is a top 10 list of states ranked by deal activity. Texas leads with Washington and Colorado rounding out the top 3 list. Georgia (home to Kabbage, a small-business lending startup valued at $1B), Florida, Utah, and North Carolina all made it into the top 10, as seen below.

Below is a list of the largest rounds to the 47 states and Washington DC. New Jersey-based Jet tops the list with its $500M Series B in November 2015. As seen below, there are multiple unicorns headquartered in flyover states including Avant, Fanatics, and Vox Media.

Want more data on US states? Login to CB Insights or sign up for free below.