Mother Nature does it first. Tech follows behind.

Biomimicry – using nature as inspiration for designs, technologies, or systems – has been going on for centuries.

Whether it’s an airplane mimicking a bird in flight, or a field of microscopic carbon tubes creating a “forest” to absorb light particles, biomimicry helps technologists solve complex problems in common sense ways.

Mother Nature, in a sense, is the world’s oldest R&D lab.

Falcons are among the fastest and most agile predators in the sky. They’re also highly adaptable – capable of thriving in nearly every habitat on Earth – thanks to their ability to capture prey under almost any conditions.

The US military wants to be just as effective at capturing enemy drones: The Air Force recently funded an Oxford University study designed to understand the “method of attack” of the peregrine falcon, one of nature’s fiercest hunters.

The researchers used miniature GPS receivers and onboard video cameras to track peregrines attacking dummy targets that were either thrown in the air by a trained “falconer,” or towed by an aerial drone.

After studying 55 “attack flights” in total, the researchers found that falcons behave more like guided missiles than they had previously realized, with some exceptions.

When modeled in a mathematical simulation, the birds’ hunting behavior exhibited similar patterns to the rules of “proportional navigation,” which is a system commonly used to direct combat missiles in flight.

However, the falcons showed a greater ability to adjust the angle of their attack than is commonly seen in proportional navigation. According to the researchers, they make these adjustments to compensate for their slower speeds than certain prey in the sky.

By creating navigation algorithms that allow military aircraft to behave even more like falcons, the research initiative may ultimately help protect US lands and people from airborne enemy combatants.

“Our next step is to apply this research to designing a new kind of visually guided drone, able to remove rogue drones safely from the vicinity of airports, prisons and other no-fly zones,” says Professor Graham Taylor of Oxford University’s Oxford Flight Group.

Check out a “falcon’s-eye” view of the predator attacking dummy prey targets in flight in the video below.

On search engines and social media sites, so-called “similarity search” algorithms serve up targeted results and recommendations. But computers aren’t the only ones that use searching and matching systems to navigate our world.

In fact, similarity searches help keep insects alive: When flies encounter an odor, for example, their brains must determine how to behave in response to it – approaching safe smells (like food) or avoiding harmful ones (like chemicals). They make that determination by computing how similar a new odor is to those encountered before.

According to researchers at Salk Institute, the brain of the fruit fly has a highly elegant, powerful similarity-search mechanism for carrying out this process.

When fruit flies first sense an odor, each smell produce a unique profile across 250 neurons.

So when a new odor is encountered, the similarity of its “profile” is rapidly compared against the entire 250-cell profile of any smell it has ever encountered before.

That process differs significantly from the way most online platforms profile and compare information in similarity searches.

Algorithms typically assign tags or “hashes” to a piece of information based on certain characteristics.

Similarity-driven recommendations will then surface you suggestions from “buckets” of items with similar hashes.

That “locally-sensitive hashing” process, as it’s known, reduces the dimension of search results to a limited set of similar characteristics. (You like songs by Jay-Z? Here are more songs by Jay-Z or similar artists.)

By comparing profiles across 250 dimensions, fruit flies’ brains can understand broader paradigms of similarity or difference than most similarity-search systems today.

That’s why the researchers believe their work should inform algorithms on sites like Amazon and Spotify in the future: Hypothetically, algorithms that think like fruit flies could understand more about the qualities of the Jay-Z songs you like, and the ones you don’t.

“A dream shared by neurobiologists and computer scientists is to understand how the brain computes well enough that we can adapt its methods to improve machine computation,” says Charles Stevens, co-author of the work. “Our paper provides a proof of principle that this dream may become reality.”

Medical adhesives as sticky as slugs

Using medical adhesives to repair injuries inside the body is a unique challenge: Most high-grade adhesive products are toxic to cells, inflexible when dry, and do not bind strongly to biological tissue.

So finding a natural adhesive that exists in living organisms could provide clues for creating a better “bioglue.”

Harvard researchers recently created a safe, super-strong “tough adhesive” that binds to living tissues with a strength comparable to the body’s own cartilage. Their inspiration: The secretions of the Dusky Arion – a slug species commonly found in Europe and parts of the US.

When threatened, the Dusky Arion secretes a special kind of mucus that glues it in place, making it difficult for predators to pry it from a surface. The adhesive’s effectiveness results in part from the positively charged proteins in the “matrix” of its molecular composition.

The Harvard team mimicked that composition with the double-layered design of their bio-inspired hydrogel. 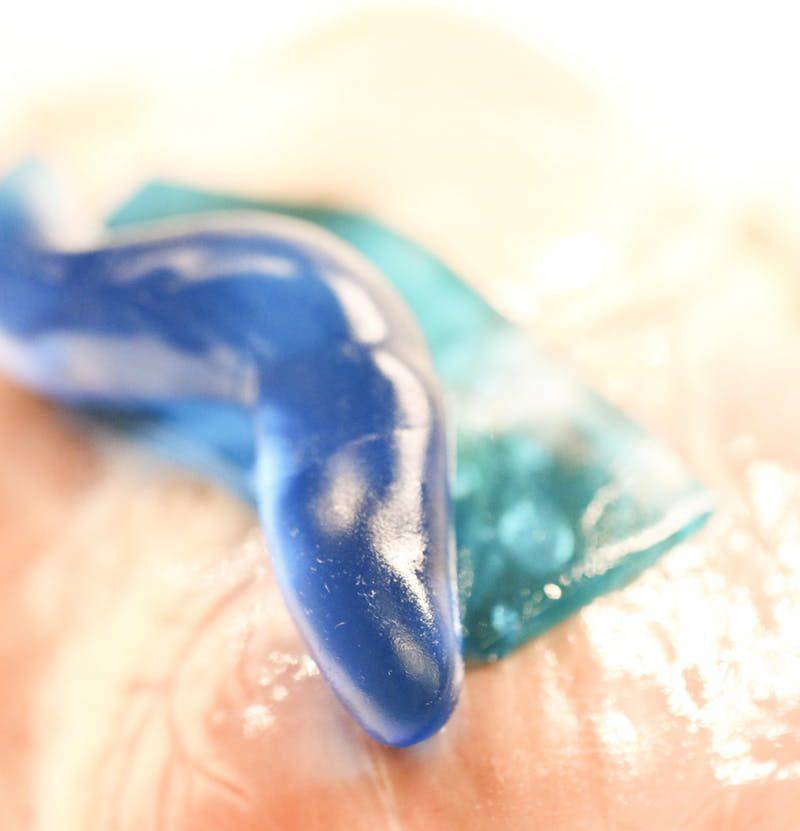 The adhesive underlayer of the substance has positively-charged polymers protruding from its surface, which it makes extremely strong.

In experimental tests, it took three times as much force to disrupt the bioglue’s bonding compared to other medical-grade adhesives.

The substance was also highly adhesive to both dry and wet pig tissues (including skin, cartilage, heart, artery, and liver). That shows its potential for use as an injectable solution for mending deep injuries, or as a substance capable of affixing medical devices, such as stents or bone implants, to tissues inside the body.

And thanks to the adhesive’s highly advanced composition, further R&D on the adhesive could lead to game-changing use cases.

If the adhesive were made with biodegradable materials, for example, it could decompose after serving its purpose in the body. That could enable the researchers to someday “combine the technology with soft robotics to make sticky robots, or with pharmaceuticals to make a new vehicle for drug delivery,” says co-author Adam Celiz.

“Nature has frequently already found elegant solutions to common problems; it’s a matter of knowing where to look and recognizing a good idea when you see one,” says Donald Ingber of Harvard. “We are excited to see how this technology, inspired by a humble slug, might develop into a new technology for surgical repair and wound healing.”

Further information on each research initiative is available below: