As companies delay their IPOs and raise large amounts of funding in private markets, mutual funds have been one of the deep-pocketed “crossover investors” funding tech startups.

Recently, some of the most active mutual funds in tech investing — including Fidelity and Blackrock — have marked down the value of their holdings in high-flying unicorn startups, causing some concern. But have mutual funds also pulled back on their private tech deals?

We used CB Insights data to analyze the activity of the most active mutual fund investors in tech companies, focusing on the five mutual funds that have made the most bets on tech startups in the past 5 years, according to our investor data.

Specifically, we looked at the trends surrounding:

The five mutual funds have completed 65% fewer individual investments in tech so far this year compared to the same period in 2016.

Before the current slowdown, there was a clear upward trend beginning in 2013. Before then, these mutual fund investors only had completed 15 investments in aggregate across 2011 and 2012. That’s less deals than in just Q1’14 alone.

The peak in these mutual funds’ tech startup aggregate tech investments happened in Q2’15, with more than 25 tech deals involving these investors.

The last quarter saw a new low, with just 4 investments in private tech companies by these five investors. That’s the lowest investment total since Q2’13.

In the first six months of 2015, mutual funds participated in 43 deals, compared to just 15 deals in the first half of this year. The drop in activity illustrates the shift of mutual fund investor sentiment towards tech startups. 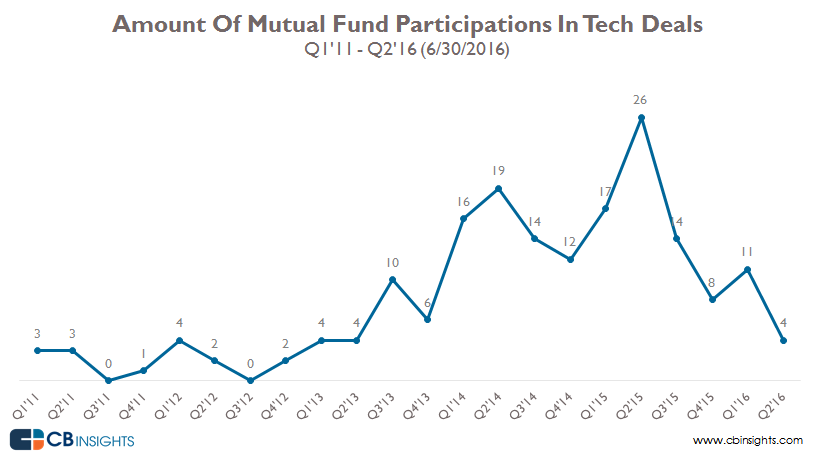 When we look at the data on an investor-by-investor basis, we see that all five mutual funds dialed back their investments in 2016 compared to the previous year (if we run-rate their activity). Hartford Funds and Wellington Management show the sharpest pullback participating in a combined 3 deals in 2016 year-to-date after investing in a combined 28 deals in 2015.

In the first half of 2016, Fidelity was the most active investor among the select mutual fund investors participating in 6 investments including deals to Oscar Health, Magic Leap, and Snapchat. 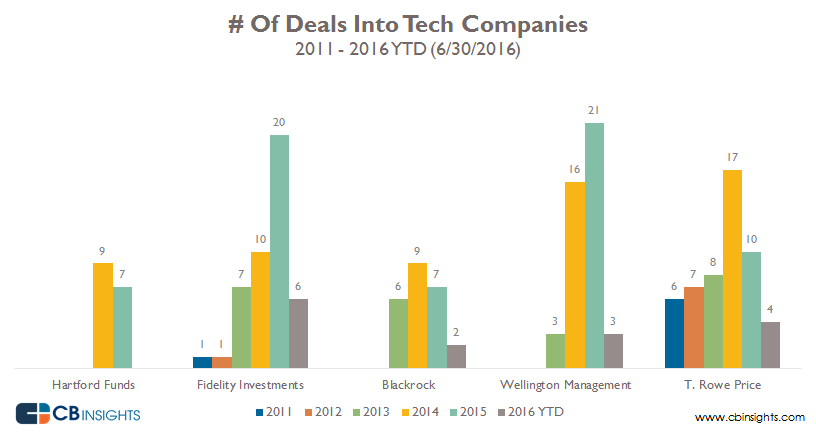 *Analysis was of equity financings only, no debt, grant, or secondary stock transactions were included.