Research Brief
2475
The majority of active VCs pulled back on the number of companies they invested in last year.

Many observers have been calling a tech cool-down recently, writing a flurry of posts and tweets about a sudden slowdown in venture deals.

But was the slowdown already in place in 2015? We used CB Insights data to see if the trend had already been in effect for some of the most active and well-known VCs. We analyzed the activity of the 20 most active VC investors in 2014, and teased out their investment pace in 2015 compared to their activity in the previous year, based on the number of unique companies they had invested in.

When we plot the number of investments made by these 20 firms in 2014 vs. 2015, there has been a significant slowdown across the majority of them. Only four firms actually increased the number of companies they backed (New Enterprise Associates, 500 Startups, Accel Partners, and Lightspeed Partners). SV Angel saw the most significant slowdown, investing in nearly 70% fewer companies in 2015 compared to 2014.

Of note, this analysis does not include geographically-specific funds, e.g. Sequoia Capital China, in the activity for the respective associated fund. 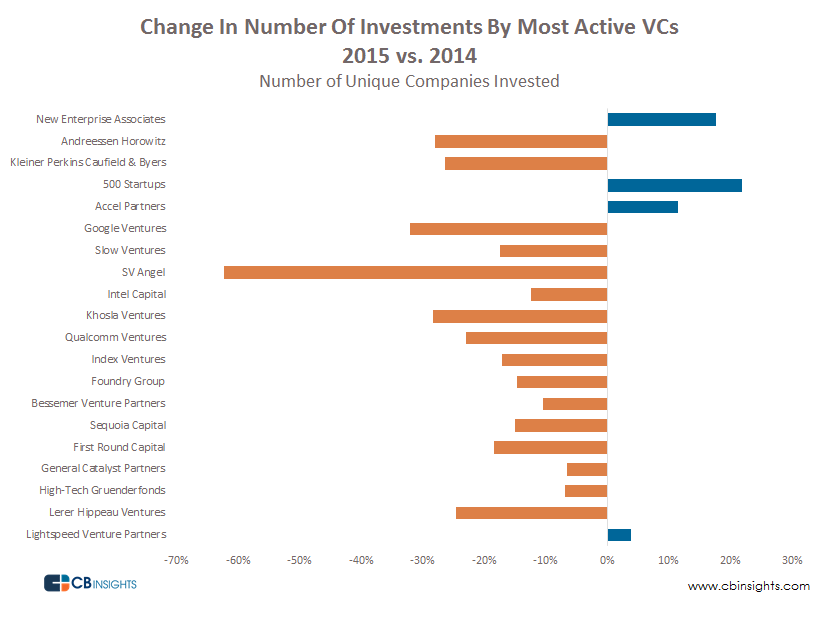 Only 3 firms invested in more than 100 companies globally in 2015 (not surprisingly, they were among the VCs that upped their investment cadence — New Enterprise Associates, 500 Startups, and Accel Partners).

For reference, the most active VC investors in 2014 by unique companies they invested in were: