Mobile Fin Tech investment activity has picked up drastically thus far this year, with over $1.1B raised in equity financings globally across 58 financings. This is part of a larger trend, which has seen mobile Fin Tech funding top $300M in 4 of the last 5 quarters, including Q2’15, which already is the biggest quarter since 2012 behind multiple nine-figure investments to One97 Communications (Paytm) and Max Levchin’s Affirm. 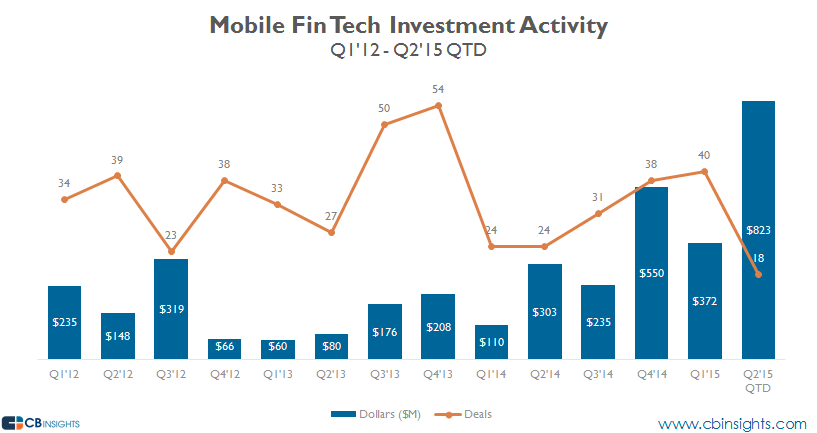 One97 Communications, the maker of Paytm, India’s largest mobile commerce platform, has accounted for 2 of the 3 largest deals to Mobile Fin Tech thus far this year, having raised a cumulative $575M from Alibaba and their financial arm Ant Financial Services Group. The company is now valued at upwards of $1.8B.

Overall, 4 of the 10 largest deals went to Asian companies, with Enniu Internet Technology, maker of u51, a mobile credit card management and analytics platform raising $50M, and India’s MobiKwik, a mobile wallet company, raising a $25M Series B. Cumulatively the top 10 deals thus far in 2015 have raised over $1B.

We used CB Insights Company Mosaic to assess the health and momentum of some of today’s top Mobile Fin Tech companies. Mobile payments company Square scored the highest, with a 960 (out of 1000) overall Mosaic score. Square most recently raised a second tranche of Series E investment from Victory Park Capital and Colchis Capital for an undisclosed sum. The company was last valued at $6B.

Robinhood, the commission free investment platform ranked second, with a 940 Mosaic score. The company just raised a $50M Series B in early May, which drove a jump in news mentions and social media traffic.

India-based MobiKwik rounded out the top three, as the mobile wallet company has a Mosaic score of 920. Mobikwik raised a $25M Series A in April 2015 from investors such as Sequoia Capital India, American Express Ventures, and Cisco Investments.

The top 10 Mobile Fin Tech companies by Mosaic below (click the logo for more company information).

Want more Mobile Fin Tech data? Check out our Fin Tech Webinar, login to CB Insights or sign up for free below.