MENA investors hold stakes in 17 unicorn companies valued at $1B+, including DiDi Chuxing, Sofi, and Knotel.

Investors based in the Middle East and North Africa (MENA) are hunting unicorns — participating in deals to startups valued at $1B+.

Past unicorns with backing from MENA investors include US ride-hailing giants Uber and Lyft, among others.

Using CB Insights data, we visualized MENA’s unicorn hunters and their investments in today’s global unicorns, all tracked on CB Insights’ real-time unicorn list. We include private, active companies only. Our analysis excludes MENA-based investors that are not direct investors or LPs in a fund that has invested in a unicorn. 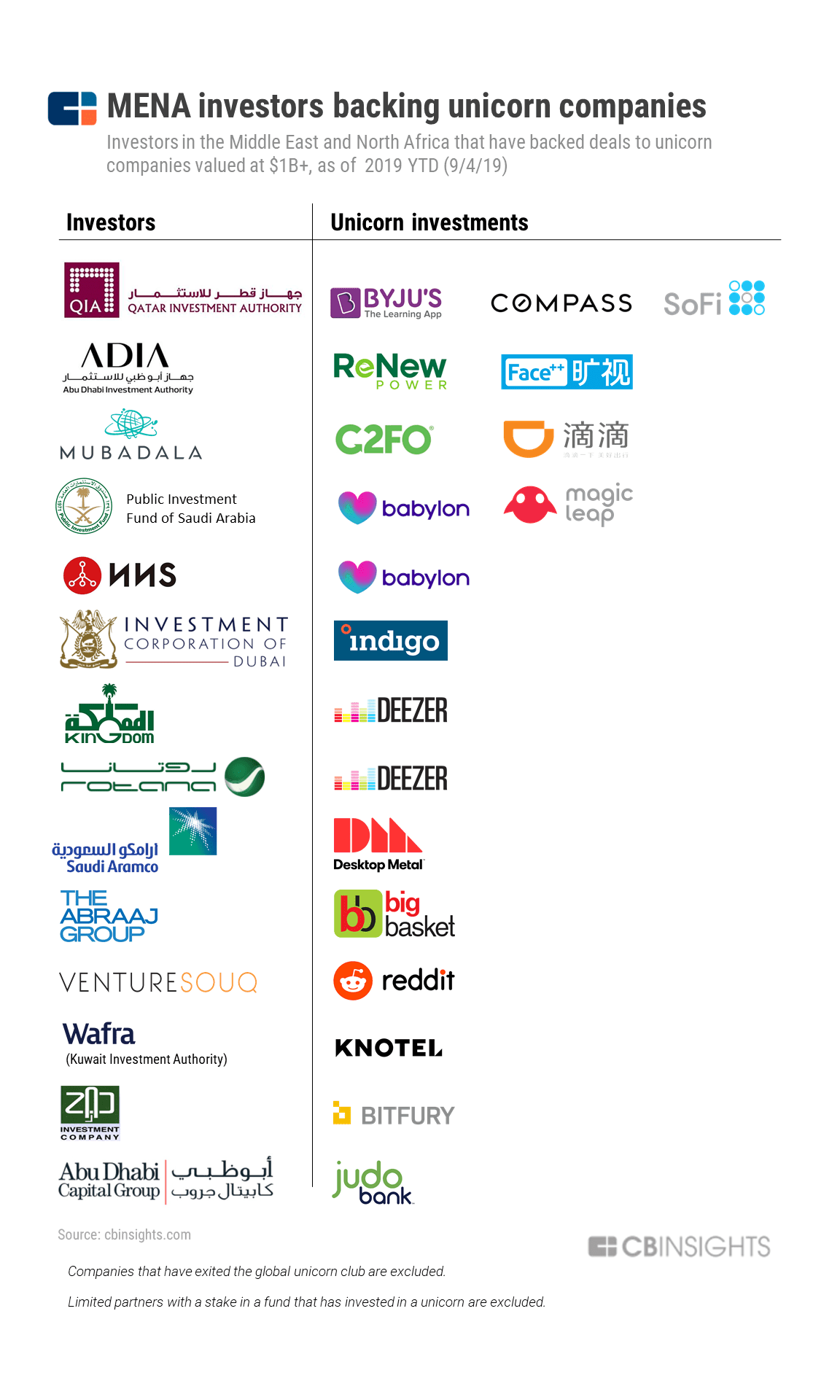 The QIA is the only MENA investor that has backed 3 companies in the global unicorn club. Three other MENA-based investors have participated in deals to 2 unicorns: Mubadala, Abu Dhabi Investment Authority, and the Public Investment Fund of Saudi Arabia.

The highest concentration of MENA investors with unicorns in their portfolio are in the United Arab Emirates (UAE). Seven of the 14 MENA investors in the graphic above are based in Dubai or Abu Dhabi, within the UAE.

Mubadala, a fund based in Abu Dhabi, participated in DiDi Chuxing’s $4B Series H round (alongside SoftBank Group) in December 2017. China-based ride hailing giant DiDi Chuxing is the most valuable MENA-backed unicorn and the second most valuable private company in the world, with a $56B valuation.

Dubai-based VentureSouq is the only MENA-based venture capital firm with a stake in a unicorn. VentureSouq backed US-based web community reddit in the company’s $200M Series C in July 2017.

From edtech to blockchain, MENA investors back a wide range of unicorns

Other MENA investors not based in the UAE also have stakes in the global unicorn club.

US-based Knotel, which offers premium office space, is one of the newest additions to the global unicorn club, reaching a $1B valuation in August 2019. Knotel’s recent $400M Series C saw participation from Wafra, the investment arm of the Kuwaiti sovereign wealth fund.