Research Brief
2865
Turns out Microsoft's M&A activity has seen an uptick ever since Satya Nadella took the helm as CEO.

Microsoft’s massive acquisition of LinkedIn for $26.2B cash was by far the largest in Microsoft’s history.

In order to investigate how it stacks up to prior Microsoft acquisitions, we used CB Insights data to look at the company’s acquisition history, including whether M&A strategy changed after Satya Nadella became CEO in early 2014

Interestingly, an uptick of acquisitions started once Satya Nadella took the helm of Microsoft. Ever since then, Microsoft has completed between 2 and 6 acquisition per quarter, whereas the pace before ranged between 1 and 4 deals per quarter. 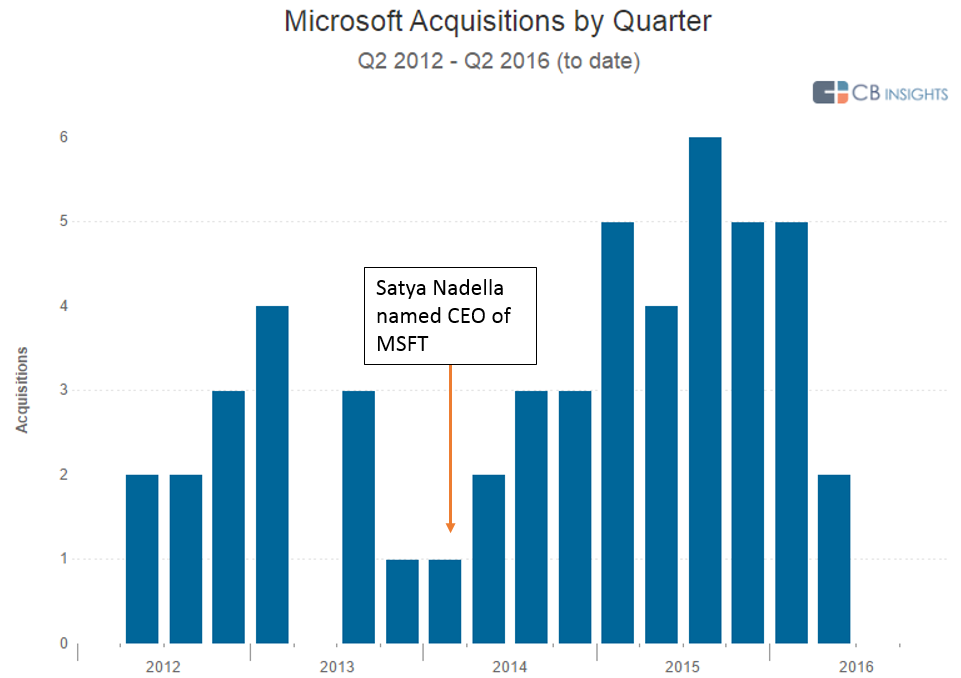 At over $26B, the recent LinkedIn acquisition is Microsoft’s largest by a significant margin.

The next largest deal was for internet telephony company Skype at $8.5B.

And third largest was for Nokia’s smartphone division, which Microsoft recently sold to a subsidiary of Foxconn. The deal for the Nokia unit is followed by marketing software maker aQuantive in 2007, which at one time was Microsoft’s largest acquisition (until the Skype deal). The fifth-largest deal is for Mojang, maker of the popular online game Minecraft.

See the top 10 below, or run this search in CB Insights to get the full data.

Note: The table excludes the take-private deal for Informatica, which involved several other investors.