The software giant envisions a holographic keyboard to accompany its AR/VR environment.

The future of typing may no longer include a keyboard. This week, Microsoft’s newly granted patent, titled “Holographic keyboard display,” describes what the future of text input could look like. Using a virtual keyboard plane to sense a user’s inputs, the AR/VR system will function like a normal keyboard and read users’ gestures to simulate typing.

The grant mentions gaming as a first application, but Microsoft’s entrenched interest in enterprise IT makes the workplace another obvious application. Combined with its headset AR/VR technology, future knowledge workers may not need desks, or even centralized workplaces. Instead, smartglasses could virtualize the desktop PC as we know it, allowing workers to type from any position and from any part of the world using hand gestures.

The patent description notes an “HMD [head-mounted display] device” that would contribute to the tracking system. But the patent describes the virtual keyboard as being applicable for both virtual and mixed reality headset applications. 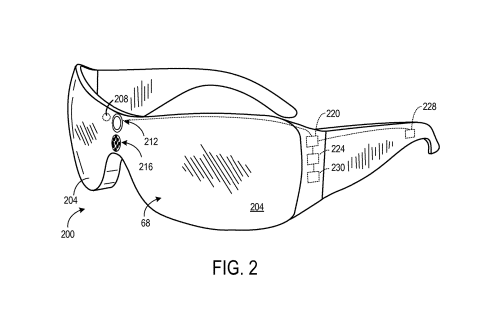 The look below gives a peek into Microsoft’s planned AR/VR environment, which includes a Kinect-like sensor bar (an existing motion-tracking product for XBox) above a television, a virtualized keyboard, as well as wizards floating in Augmented Reality. A holographic hand represents the user’s hand on the virtual keyboard, so the user can type from “a variety of positions.” 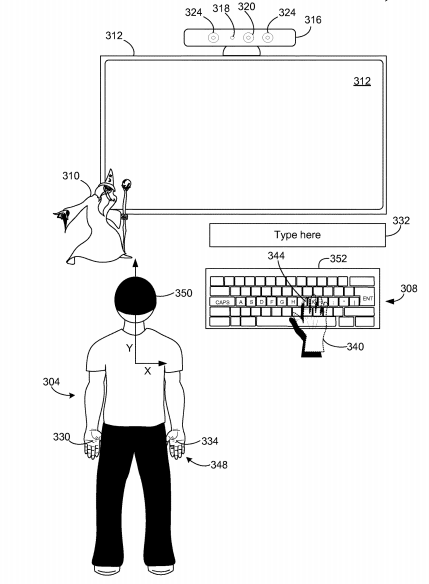 While the patent appears to explicitly target game play, referencing “a user … playing an interactive game that includes the holographic wizard,” the virtual keyboard could also ultimately displace the traditional workplace setup, where Microsoft already has a considerable presence via its Office Suite. Microsoft has already shown an interest in expanding the use cases for AR with its patent for glasses that can track when and what you eat.

Currently, Microsoft’s flag is firmly placed in AR with its Hololens technology (some of which is licensed from smartglass maker ODG, which raised a $58M Series A at the end of 2016). It’s not difficult to imagine future generations of Hololens shipping with an AR-ready word processor, much like Word did on the PC.