Some of 2016’s largest VC-backed acquisitions came from non-tech companies including the $1B+ acquisitions of Cruise by GM, Jet.com by Walmart, and Dollar Shave Club by Unilever among others. Yet, while old-line companies have emerged as bigger players in tech M&A, the largest US internet companies have slowed down their acquisition activity over the last two years.

Using CB Insights data, we analyzed the acquisition activity of the largest US internet companies by revenue (per 2015 10K reports) to analyze their M&A activity over the last 5 years. We included:

*Apple is included as it is estimated to have generated roughly $20B in app revenue in 2016, more than several companies on this list.

While aggregate M&A activity from the 10 selected internet companies actually increased 7% in 2016, M&A activity over the last two years is significantly lower than 2013 and 2014 levels, which benefited from a flood of talent acquisitions or “acqui-hires.” Compared to 2014, 2016 saw the 10 US internet giants acquire 35% fewer companies overall. 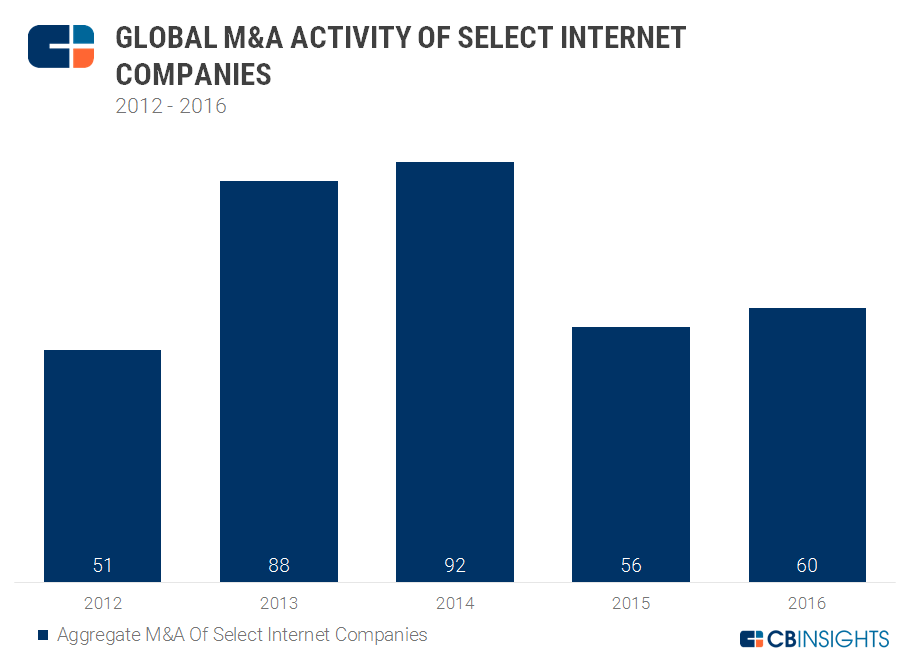 Of the 5 most acquisitive internet companies on the list, Google had the most acquisitions with more than 105 deals recorded since 2012. But Google’s activity has fallen from a high of 35 disclosed acquisitions in 2014 to under 20 in both 2015 and 2016. Yahoo, which was a prolific acquirer in 2013 (29 acquisitions) and 2014 (19 acquisitions) completed just 1 M&A deal in 2015 and 0 in 2016. However, this is not surprising given Verizon’s impending acquisition of Yahoo.

369 of the most promising private venture and equity-backed tech companies. Sign up for a free trial and look for the 2017 Tech IPO Pipeline in the Collections tab.

After Facebook completed 10+ acquisitions annually between 2012 and 2014, the social network giant slowed its pace as well, competing just 8 acquisitions in 2016 and 7 in 2015. Of the five, Salesforce has seen the most notable increase in M&A activity, hitting a five-year high with 12 deals in 2016 after completing just one in 2014. 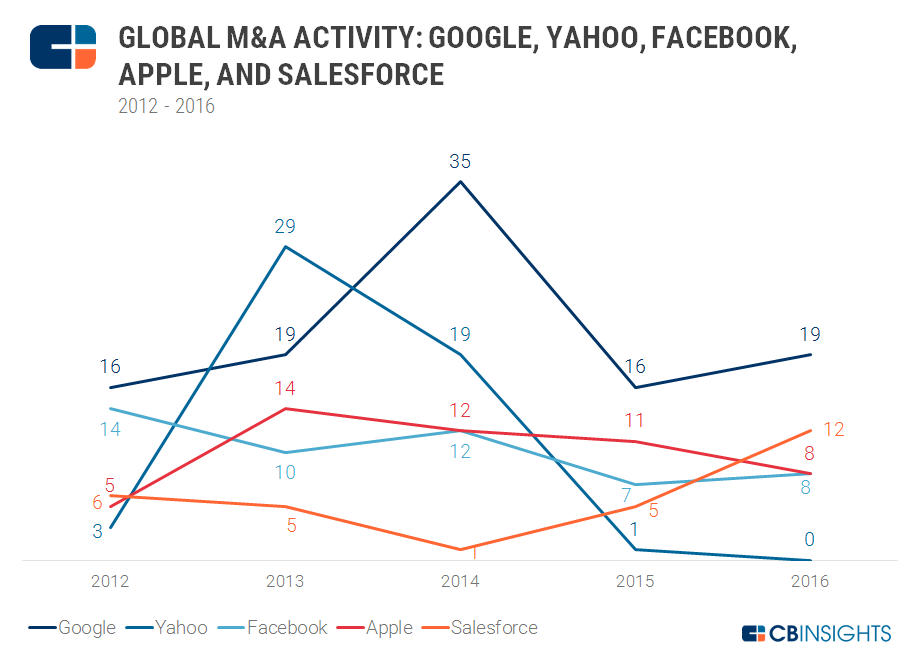 Want more information on M&A activity? Sign up for CB Insights below.