Research Brief
3262
Medical device funding drops in Q2'16 but is expected to finish the year stronger than 2015.

Now-controversial medical device startup Theranos — which had raised $400M by the end of 2014 — spent the large part of this year trying to weather a storm of press and regulatory scrutiny triggered by problems with its blood testing devices.

But, overall, the medical device industry is on track for a slight uptick in deals and dollars to private companies in 2016, after seeing a decline in both in 2015.

Robust funding is crucial for companies in this industry, which require development pipelines of 3 to 7 years in duration and millions of dollars in costs in order to develop devices that meet regulatory and other hurdles for commercialization.

The US Food and Drug Administration classifies a medical device as an instrument or machine used to diagnose, treat, or alter the structure of the human or animal body.

Using CB Insights data, we examined funding and deal activity within the medical device industry since 2012.

Year-to-date as of 8/8/16, deal activity and funding have reached $2.1B over 288 deals. At the current run-rate, this year’s deal count is on track to surpass 475 deals, which would be 6% higher than last year’s deal volume. Buoyed by funding to two cardiology-focused startups, CVRx and Acutus Medical, 2016 is on track to reach $3.5B in total funding, a slight increase over last year’s dollar total 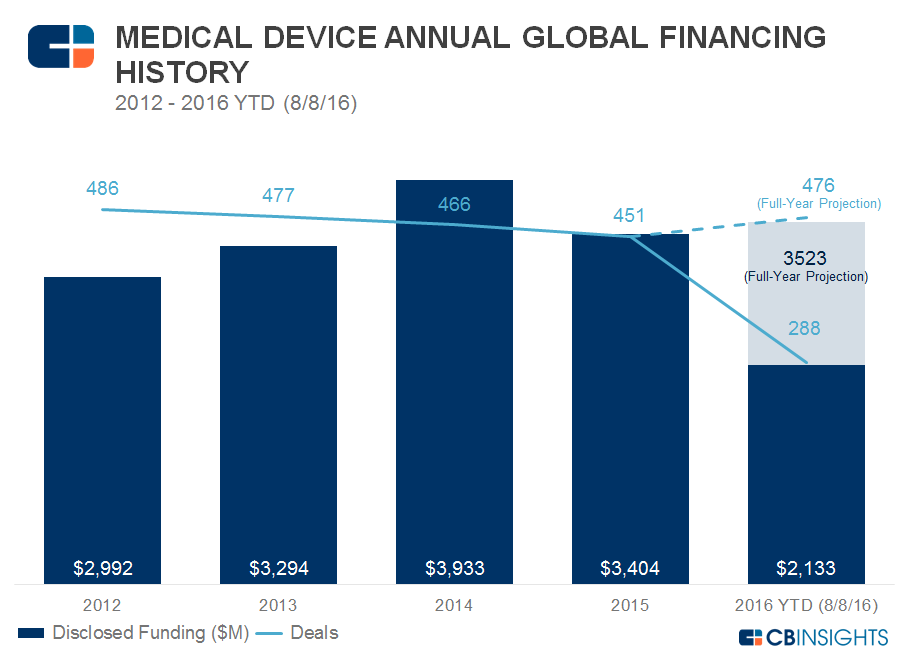 On a quarterly basis, after hitting a 4-year high of $1.5B in Q2’14, funding to medical device startups has sobered considerably. Q2’14 was propped up by a $120M Series G round into one of the most well-funded medical device companies, Proteus Digital Health.

Q2’14 notwithstanding, the past four years have seen a relatively steady flow of funding to startups in the medical device space. Of the last 10 quarters, 5 have seen 120+ deals including Q1’16 and Q2’16. 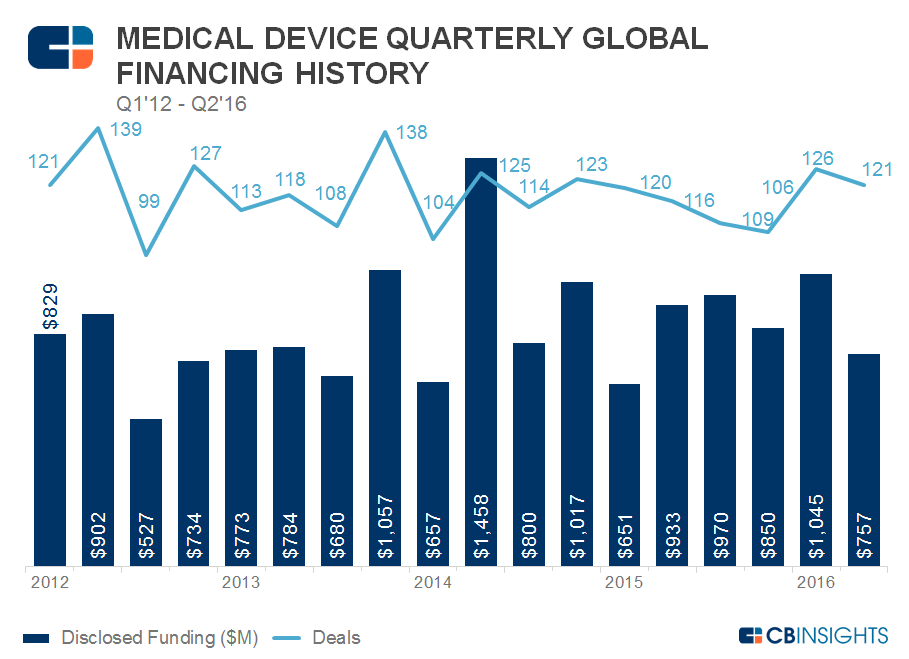 Contrary to the digital health landscape, medical device funding has tended to be less weighted towards seed/angel rounds. Seed/angel rounds only make up 18% of total deals in 2016 to-date and has not wavered much from this proportion over the past four years.

“Other” funding rounds to the medical device industry have been trending up and currently represent the largest share of deals at 42%. This category includes corporate minority rounds, VCs, and convertible notes. 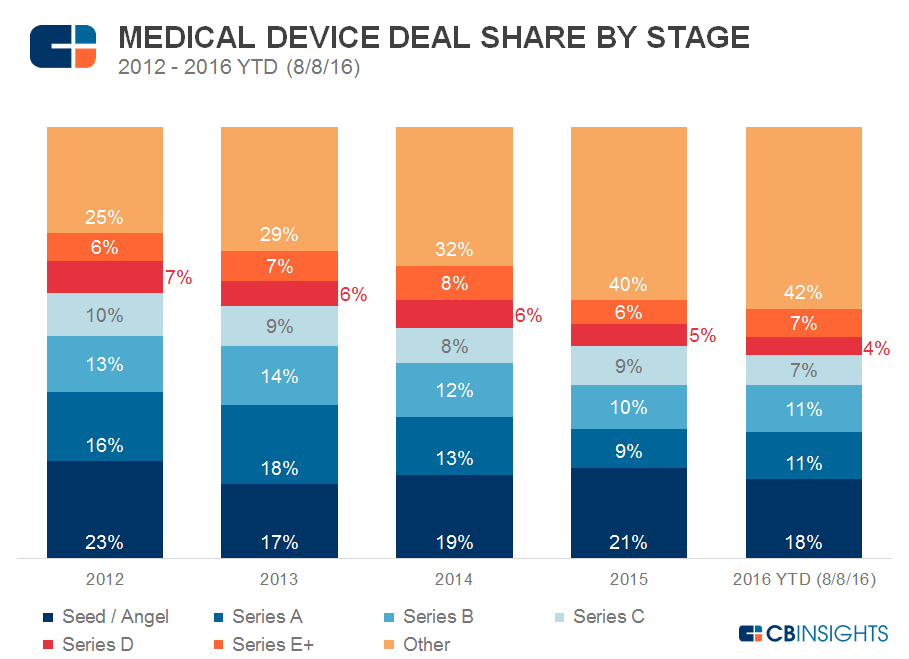 NEA took the top spot as the most active investor in medical devices. Versant Ventures came in a close second and Johnson & Johnson Innovation took third. While the majority of NEA’s medical device investments have been based in California, the firm has also made a few international bets, including FIRE1 in Dublin and Panacea Medical Technologies in Bangalore, India.

The top five most well-funded medical device startups have all raised upwards of $250M, with troubled Theranos alone securing $400M.

Each of the top five companies address a different problem in healthcare. For example, Proteus Digital Health develops an FDA-approved ingestible sensor tracking pill intake, and Mevion Medical Systems produces a proton therapy system for the treatment of cancer.

See the full list below. Note that these funding figures exclude debt rounds and lines of credit.

Want more data about top medical device startups? Login to CB Insights or sign up for free below.