Deal count is on track to come in well above last year's total but funding amounts are lower overall.

Over $2B has poured into private companies in the medical device industry already this year.

Other than VCs, the most active investors in the space tend to be healthcare-focused corporates such as Johnson & Johnson, Boston Scientific, or Medtronic. In addition, hedge funds, mutual funds, and investment banks, which are typically focused on public markets, have also become increasingly active in the medical device startup space.


Involvement by these “crossover investors” in early-stage medical device companies, however, has been inconsistent. As a group, they have dialed up and dialed down activity. More recently, though, these investors have been increasing their participation in the space. This year, crossover investors are on track for an annual high in participation in deals to medical device startups.

Year-to-date as of 8/8/16, these crossover investors participated in $366M of funding across 27 deals to medical device companies. At the current run-rate, they will be involved in 45 deals this year, representing a 40% increase in deal count compared to last year. However, funding to medical device startups through deals involving crossovers is on track to come in lower than last year. At the current run-rate, funding will reach $504M this year vs. $660M last year.

One of the more active investors this year is the French investment bank BPI France, which participated in at least 5 deals in 2016 year-to-date to medical device startups, including a $4.5M Series A to Keranova and $1.9M Series A to Surgivisio. Keranova develops surgical equipment with ophthalmic applications while Surgivisio creates 2D/3D imaging technology for use in minimally invasive surgery. 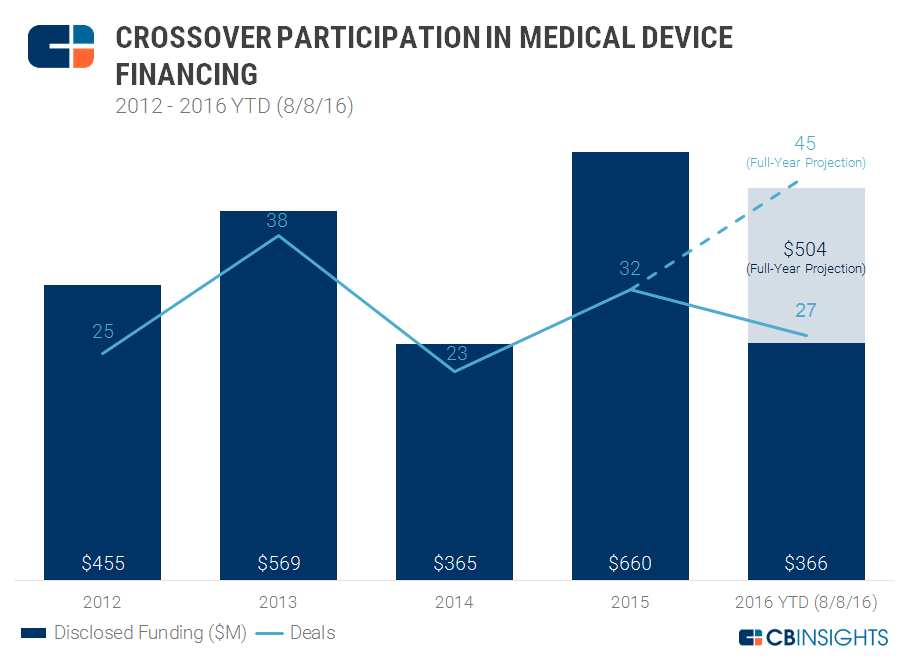 However, deal activity was still concentrated in mid-stage deals with well over one-third of deals going to Series B and C stage companies; the remainder was split between early and later stages.

Two of the larger early-stage deals this year with crossover participation were the Cambridge Medical Robotics‘ $20M Series A from investors including the Swiss alternative investment firm LGT Capital Partners and Via Surgical‘s $6M Series A raise from asset management firm Benslie Investment Group. 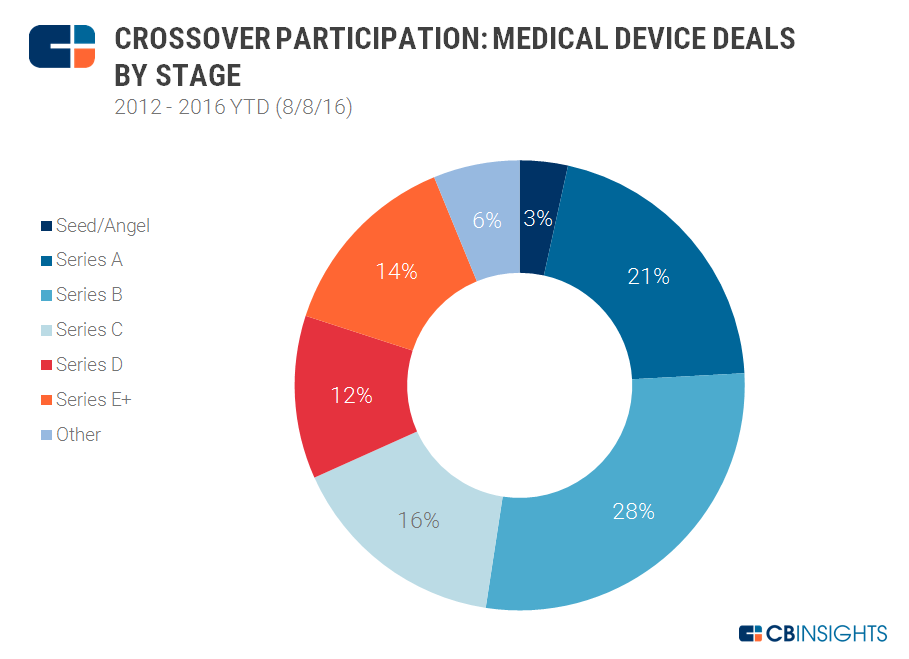 Want more data about top medical device startups? Log in to CB Insights or sign up for free below.


This report was created with data from CB Insights’ emerging technology insights platform, which offers clarity into emerging tech and new business strategies through tools like: If you aren’t already a client, sign up for a free trial to learn more about our platform.