The medical device industry has received a relatively steady flow of funding since 2012, with 2016 on pace to record $3.5B in financing to private companies, helped along by crossover investors — those like mutual funds normally focused on public markets — that have become increasingly active in the space.

Exits are also on track for a strong year. While there’s been a slowdown in total number of medical device IPOs this year, 2016 already reached a high in M&A activity. And this year is likely to top last year for total exits in the sector.

We used CB Insights data to analyze exit trends for the medical device industry, as well as identify the largest medical device exits and top acquirers in the space.

As of Q3’16, the industry has seen 30 exits this year, 28 M&A and 2 IPOs. Pulse Biosciences, a development-stage device company working on an electric signaling platform with potential oncological applications, went public in May of this year valued at $50M. And in July, Tactile Systems, focused on therapeutic devices for chronic swelling, went public at a $166M valuation. 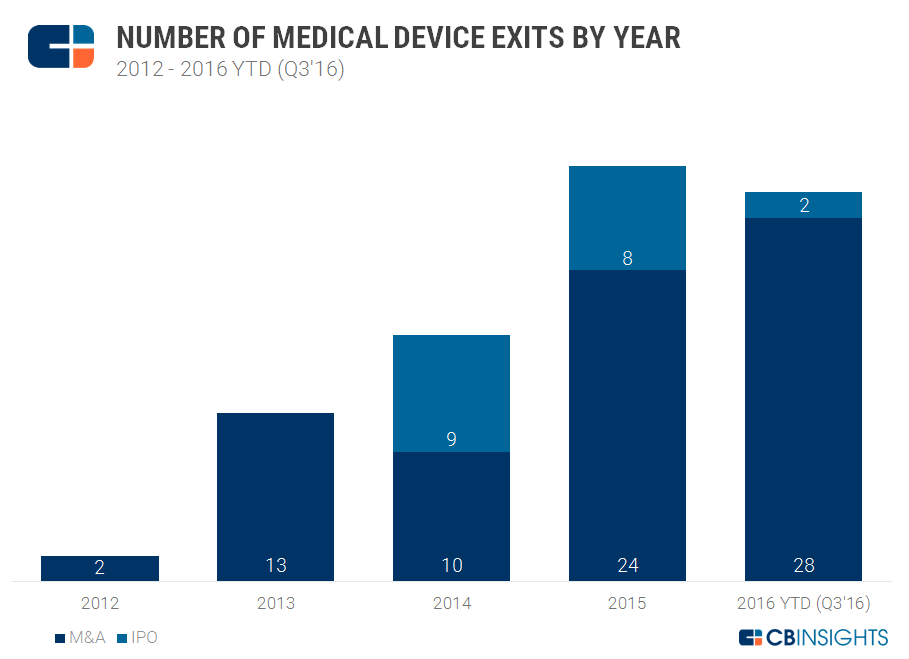 Laborie Medical Technologies, an Ontario-based producer of devices with urological and gastroenterological applications, topped the list of medical device exits since 2012 with its $640M acquisition by Patricia Industries, itself a part of Investor AB, a Swedish investment company.

Advanced Accelerator Applications, a France-based company that develops diagnostic and therapeutics products such as PET (Positron Emission Tomography) and SPECT (Single Photon Emission Computed Tomography) imaging solutions, comes in second with a valuation of $617M at the time of its 2015 IPO. Following are ConforMIS, Topera Medical, and Glaukos, all with >$500M valuations at the time of exit.

The most active acquirer in the medical device industry was Medtronic with 8 acquisitions since 2012. Top acquirers were typically attracted to companies focused on the cardiovascular system. Five of Medtronic’s 7 acquisitions, TWELVE, Aptus Endosystems, and Medina Medical, were cardiovascular-based companies.

In a distant second were Abbott Laboratories and St. Jude Medical, with 3 acquisitions each. Again, 5 of these 6 acquisitions were in cardiovascular-focused companies, including Topera Medical and Endosense.