Research Brief
3572
A frenzy of dealmaking is reshaping the face of digital media, as media corporates back mega-deals, mergers, and M&A in the space.

Companies such as The New York Times, Walt Disney, Fox, and Comcast/NBCUniversal are looking to startups such as BuzzFeed, Vice, Refinery29, and others for new models of engaging audiences.

As they navigate this world, media conglomerates have been either directly investing in or outright acquiring their younger competitors. This wave of consolidation in digital media parallels consolidation in the larger media business, as mergers—like the potential Gannett and Tronc combination reported in October 2016—reshape the industry.

Below, we used CB Insights data to study where large media companies have been allocating resources in recent years.

This post is an update of an earlier 2015 analysis of large media companies investing in startups. Click here to read it.

We identified 21 media companies that have been the most active investors in private markets in recent years, and used CB Insights tools to analyze their activity. We included companies heavily involved in distribution but excluded Hollywood studios. Many of the companies below have been the target of acquisitions, or were spun off from parent companies at some point in the period under study. They are marked with an asterisk.

The visualization of their investment activity below was created using CB Insights’ Business Social Graph, which can show how top investors and target companies in any industry are interrelated. Click on the image to enlarge. 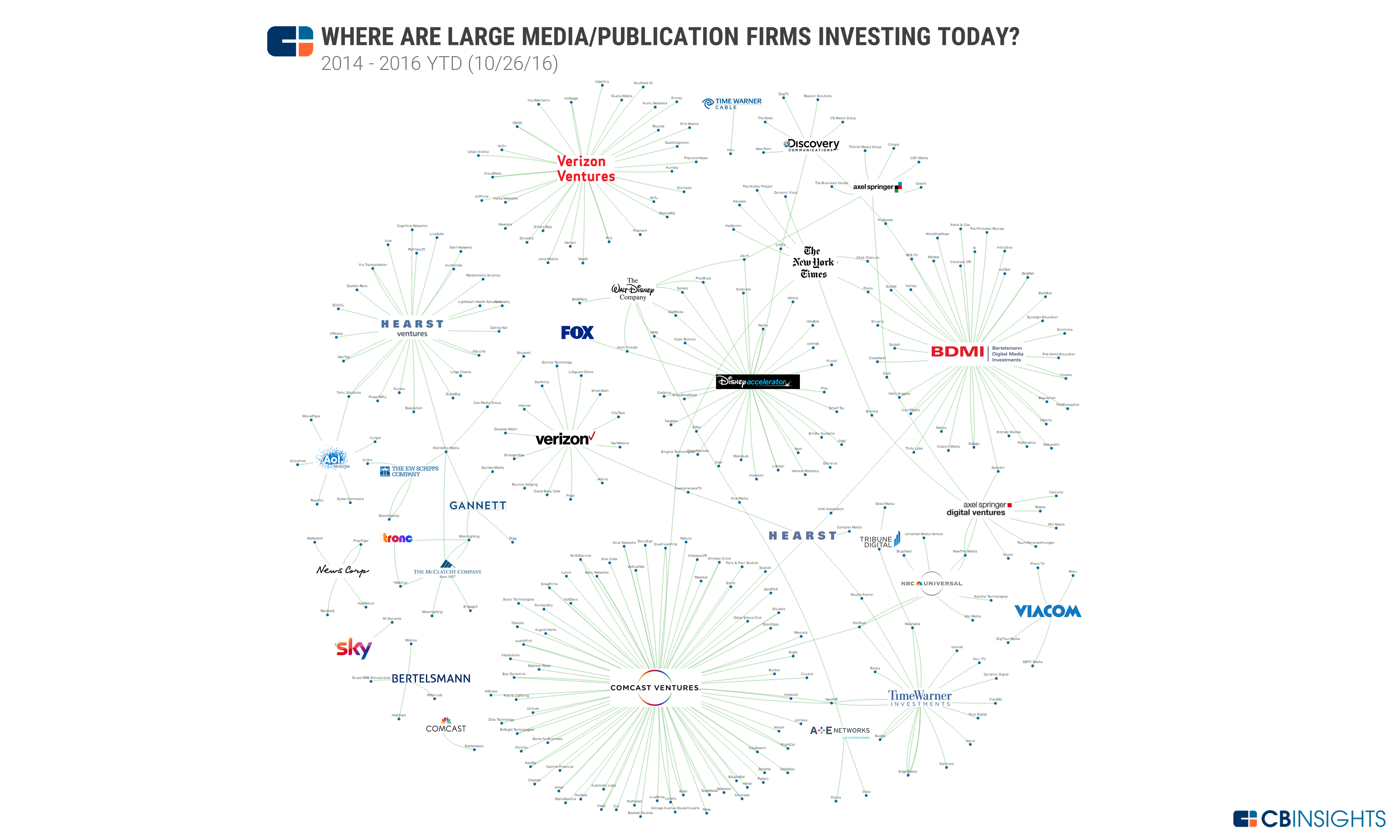 Key takeaways from the social graph include:

At the current run rate, this year’s deal count from the most active media corporates in private markets (the 21 listed above) is on track to surpass 130 deals, a 20% increase over 2015. Propped up by Walt Disney Co’s $1B corporate minority deal to BAMTech, a provider of direct-to-consumer streaming services, funding from these deals in 2016 is on pace to reach a new high of $4.5B. 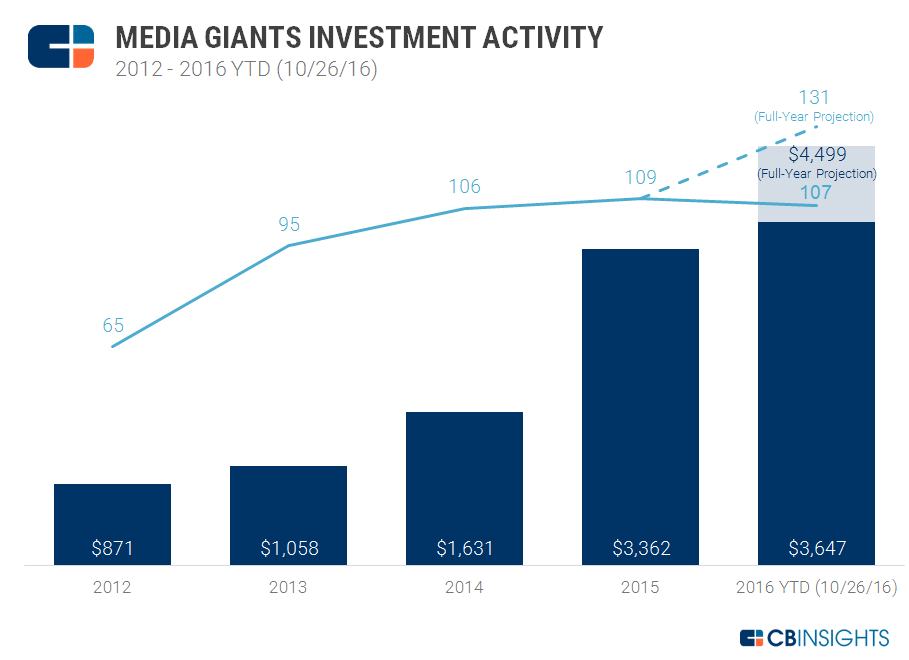 Year-to-date, there have been 25 exits via corporate majority or acquisition by the large media companies listed above, up over 100% compared to last year, which saw a dip in such activity. In April, AOL acquired virtual reality production studio RYOT. Founded in 2012, RYOT shoots films and documentaries in VR. In June, Hearst Corporation acquired a corporate majority stake in MedHOK, a platform used to ensure healthcare payer regulatory compliance. 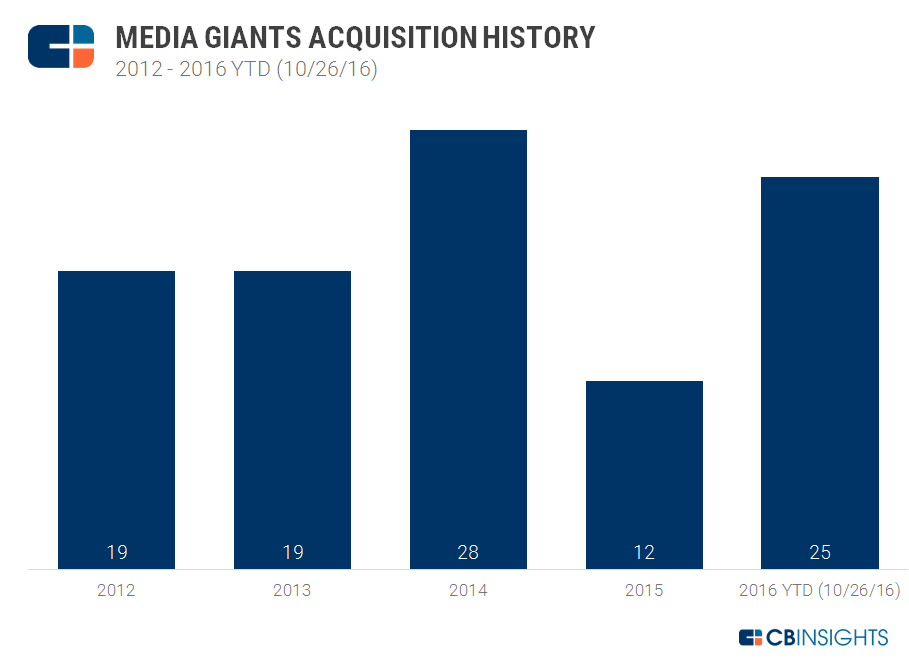 The top 8 investors are all media or media/telecom companies with corporate venture arms. Comcast/Comcast Ventures is by far the most active investor in media, having participated in deals to over 90 different companies since 2012. In 2nd and 3rd are Bertelsmann/Bertelsmann Digital Media Investments and Verizon/Verizon Ventures.

Following the media companies with corporate venture arms, the next most active media corporates are The New York Times and Discovery Communications with 10 investments each.

Looking solely at the corporate venture capital arms of traditional media companies, we observe a few differences since our 2013-2015 report. This includes greater collaboration among media VCs and more willingness to invest in companies taking nontraditional approaches to the media.

1. Updates since our last report:

2. Comcast Ventures is by far the most active corporate investment arm among the group, having invested in over 70 companies since 2014. Following Comcast Ventures are Bertelsmann Digital Media Investments, Verizon Ventures, and Hearst Ventures, all with 33 deals or fewer. 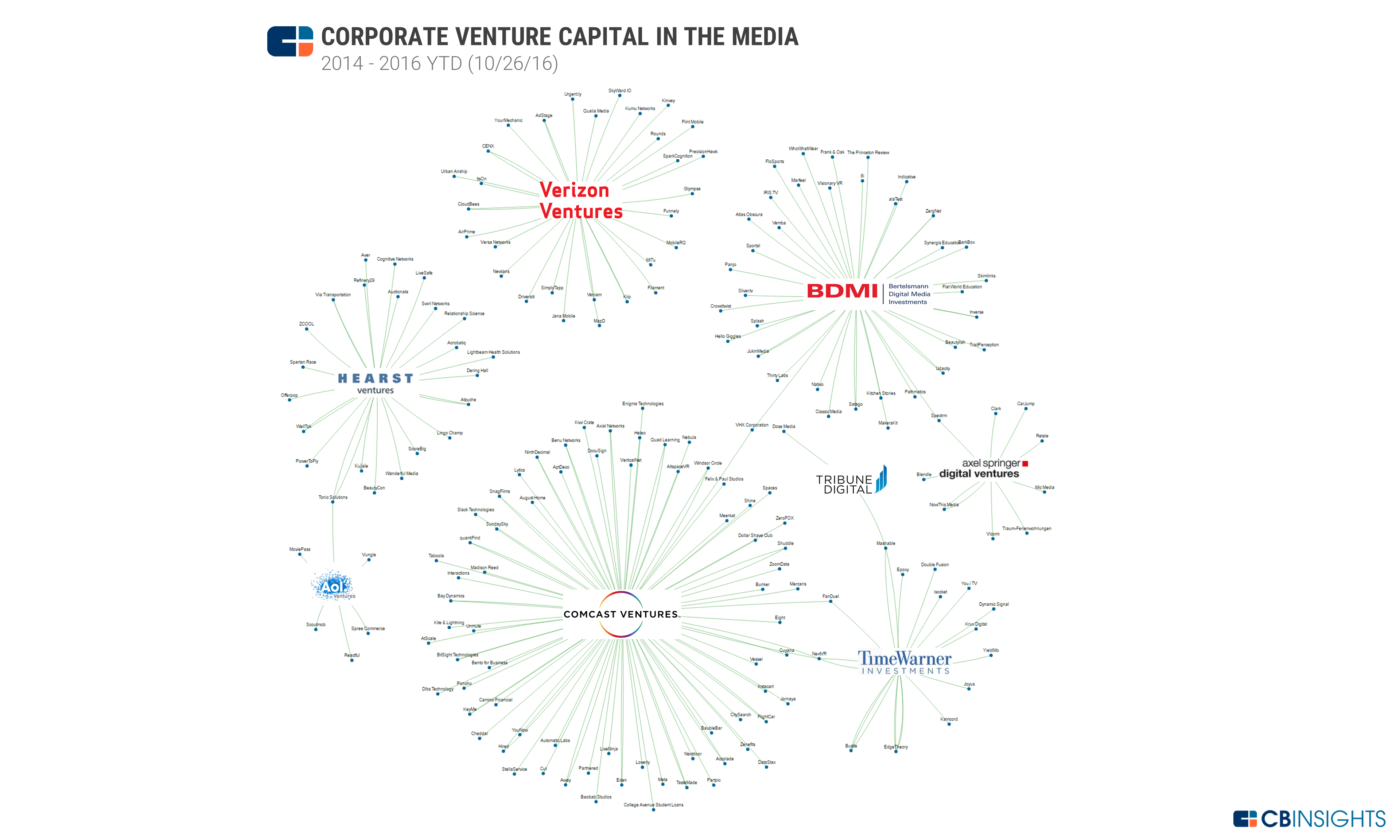 In parallel with the overall trend of large news outlets reaching out to startups, these smaller companies are deciding to grow via mergers in order to compete. On October 11, 2016 it was announced that digital media companies Thrillist Media Group, NowThis Media, and The Dodo would be merging with Seeker, a division of Discovery Communications. Discovery invested $100M in the newly formed company, Group Nine Media, as part of the deal.

Other media corporates had previously invested in one or more of the above companies including NBCUniversal, German media conglomerate Axel Springer, and Sportsrocket. NowThis Media was the most-well funded of the group, with a total of $32M, followed by The Dodo with $18M and Thrillist with $15M. The only VC to have invested in all three was NYC-based Lerer Hippeau Ventures. Thrillist’s CEO Ben Lerer is also a managing partner at LHV. 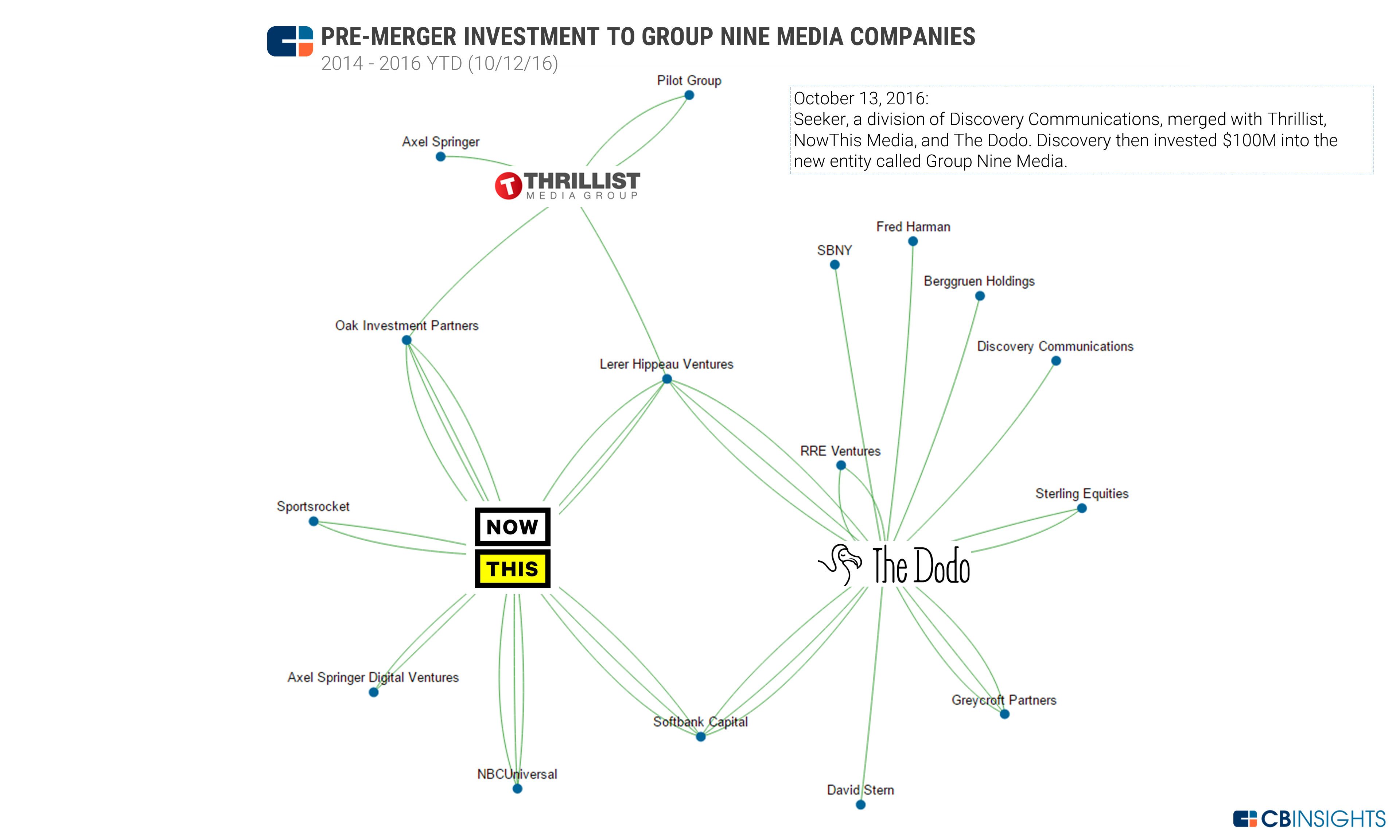 Want more data on media companies? Log in to CB Insights or sign up for free below.