Research Brief
3083
Deals in 2016 to date have been mainly low dollar and early stage.

Deals to meal kit startups peaked in 2015, with 28 deals worth over $450M in aggregate. But this year, deal size has shrunk and deal count is down. However, deal count rose slightly in Q2’16 compared to the first quarter, mirroring the pattern in overall food delivery funding.

We define meal kits as companies that deliver pre-portioned ingredients to users’ doors for cooking meals at home.

Meal kits attracted eight deals in Q2’16 vs. seven deals in Q1’16, but disclosed dollars fell from $28M to $23M. This is mainly due to a discrepancy in the largest deal in each quarter — Q1’16 saw a $17M Series B to Marley Spoon, while in Q2’16 the largest deal was a $12M Series A to Chef’d. Most other deals so far this year have been Seed/Angel stage rounds at relatively low dollar amounts.

In fact, meal kit deals overall have so far been concentrated on the low end; the median deal size since 2012 is just $1.67M. Larger deals have gone to a small group of companies; the five largest deals since 2012 have all been raised by either Blue Apron or HelloFresh. 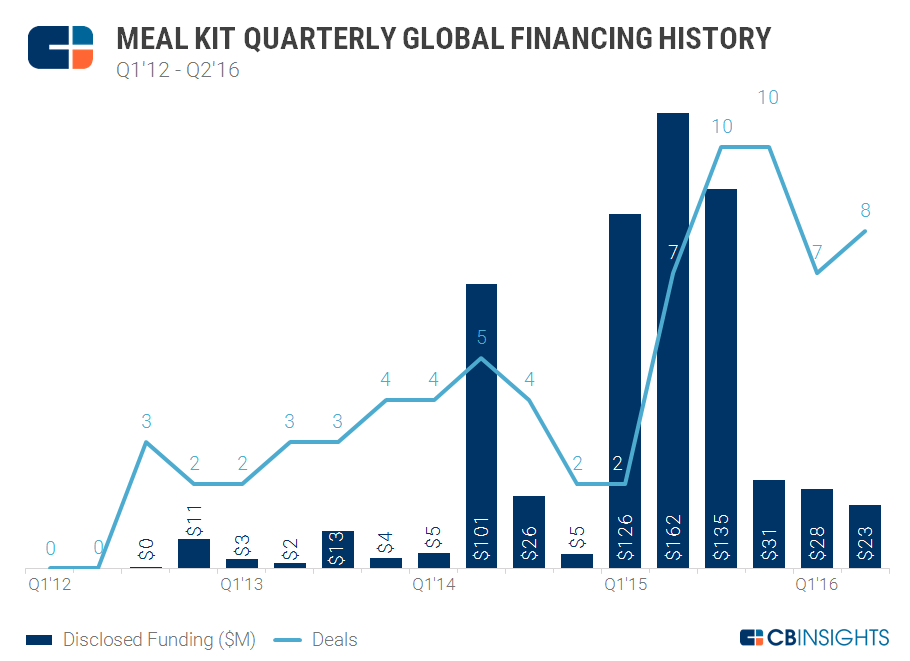 So far this year, meal kit startups have raised $88M across 18 deals. However, much of that has come in the yet-to-close third quarter and so is not visible in the chart. Meal kit startups raised approximately $48M in the first two quarters, followed by a significant bump in Q3’16 to date, with a $20M+ Series B extension to Plated (Plated previously closed a $35M Series B in June 2015) and a $15M Series B to Sun Basket. If funding trends continue at the current pace, the sector will see a slight drop in deals from last year, and a dramatic drop in dollar financing, with total funding on pace to come in at the lowest level since 2013.

With no outsized rounds from industry leaders thus far this year, overall funding figures are down.

The meal kit segment has also not seen any IPOs or M&A exits from 2012 to the present. 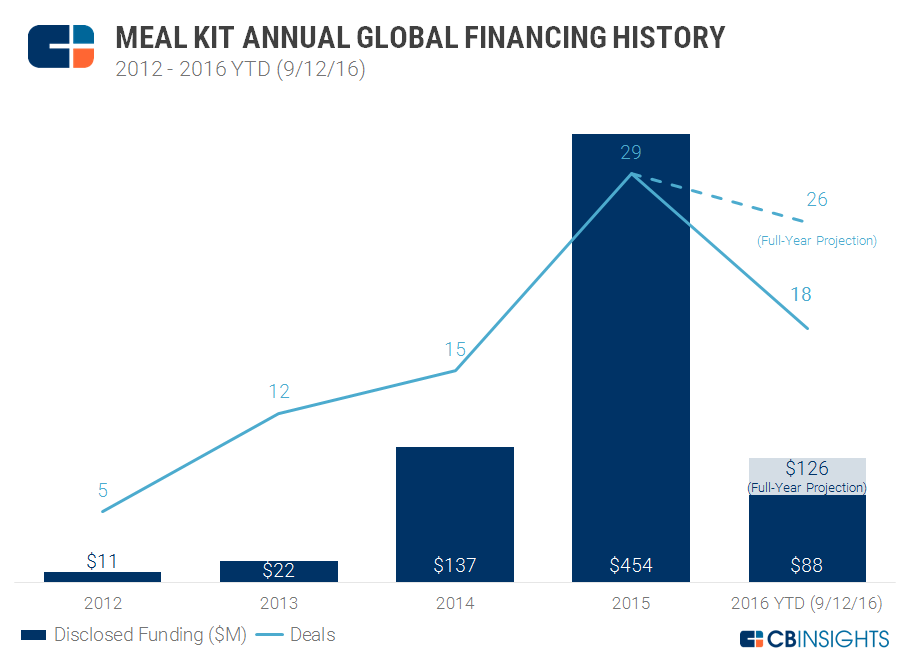 The German-based HelloFresh and the US-based Blue Apron dominate funding among meal kit startups, with $278M and $193M in total funding, respectively. Plated, in third place, has raised less than a third of the funding of the most well-funded meal kit company HelloFresh.

Want more data about food tech financing? Login to CB Insights or sign up for free below.