Our timeline infographic shows how other sleep and mattress startups have arisen after the emergence of Casper, which maintains a strong funding lead.

As consumers increasingly expect to order anything and everything with just a few taps on their smartphones, startups are bringing this “Warby Parker for X” model to the mattress world. The mattress sector had traditionally been dominated by brick-and-mortar stores. In recent years, we’ve been seeing a growing number of e-commerce mattress retailers aiming to simplify the mattress-buying process. Many of these new startups, which manufacture their own mattresses, hope to relieve shoppers’ concerns about buying mattresses sight unseen by offering free trial periods, and many use new packaging methods to ship mattresses in boxes.

Casper, the company in this space that has raised the most outside financing from investors, raised its its first funding in February 2014, and now has raised $70M. Its backers include celebrities such as Leonardo DiCaprio and Tobey Maguire, alongside VCs such as Lerer Hippeau Ventures, which has invested in a number of direct-to-consumer startups, as well as NEA, Norwest Venture Partners, Slow Ventures, and more. During its most recent funding round in June 2015, Casper was valued at $500M, on a reported $100M of sales.

Several mattress startups have been in operation for several years ahead of Casper, but have not raised outside equity funding, including Tuft and Needle.

Startups working on direct-to-consumer mattress products have the potential to upend the industry. Sign up for a free trial and look for Mattress Startups in the Collections tab.

See the full timeline of first disclosed fundings to mattress startups below. Please click to enlarge. The graphic does not include startups such as Tuft and Needle that have no disclosed external funding. The graphic includes equity fundings, crowdfunding (for Purple) and incubator/accelerator programs (for Doze). 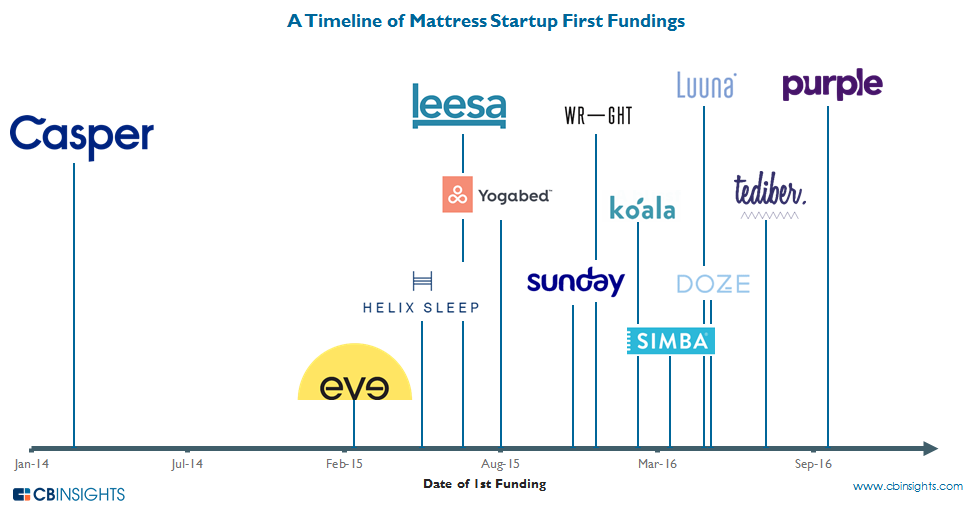 Want more data on startups driving new e-commerce models? Log in to CB Insights or sign up for free below.