We look at how the company is taking on the payments industry as digital transactions surge — and where it might fall short in the public market.

Marqeta, a cloud-based open API platform for modern card issuing and transaction processing, recently filed its S-1 in preparation for its shares to start trading publicly in June. The company is aiming for a $12B valuation.

Marqeta allows businesses to offer payment card products to customers without having to deal directly with a traditional bank. It handles the back-end payment technology while working with banks that process the payment transactions.

Amid the pandemic-driven acceleration of e-commerce and shift to digital payments, Marqeta has seen rapid growth in revenue and demand for its card-issuing technology.

Marqeta was privately valued at $4.3B last year and has raised over $526M in disclosed debt and equity. The company is backed by VCs including Spark Capital, Lone Pine Capital, and Granite Ventures, as well as corporates like Goldman Sachs, Mastercard, and Visa.

Marqeta is currently trading at $16B in the private market. Below, we take a look at where the company is gaining traction across the payments technology market and where it might face challenges as it enters the public domain.

Marqeta operates on a usage-based business model, meaning that the more customers use its card-issuing technology, the more money it earns. In 2020, the company processed $60.1B in transaction volume.

The rapid acceleration of online commerce and shift to digital payments has been a major contributor to Marqeta’s momentum — and it doesn’t show any signs of slowing down. Global online sales are expected to reach $4.8T this year, per CB Insights’ Industry Analyst Consensus. 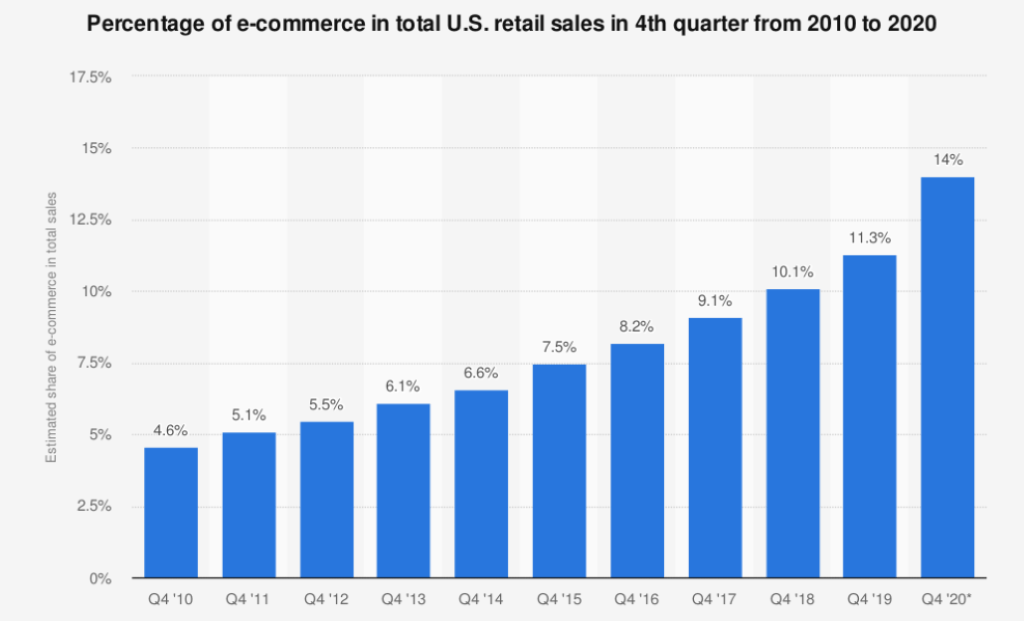 Meanwhile, global cash payments have dropped 4-5x the annual decrease in cash usage seen over the past few years. This also benefits Marqeta as consumers and businesses are buying more goods and services online.

Several challenges in the payments ecosystem paved the way for Marqeta to create card-issuing technology.

First, the acquirer-facing side of payments, which allows merchants to accept payments, has seen significantly more innovation over the last decade than the issuer-facing side, which allows businesses to customize card products for their end users. For example, there are approximately 300 acquiring banks in the US alone, even though there are around 200 issuer processors globally.

Financial institutions were the primary users of card-issuing technology, and their needs have remained the same over the years. Non-financial institutions found it difficult to launch new card programs because they had to rely on legacy issuer processor infrastructure that had limited card functionality.

Marqeta was then well-positioned to provide modern card-issuing solutions that were more developer-focused, customizable, and secure. 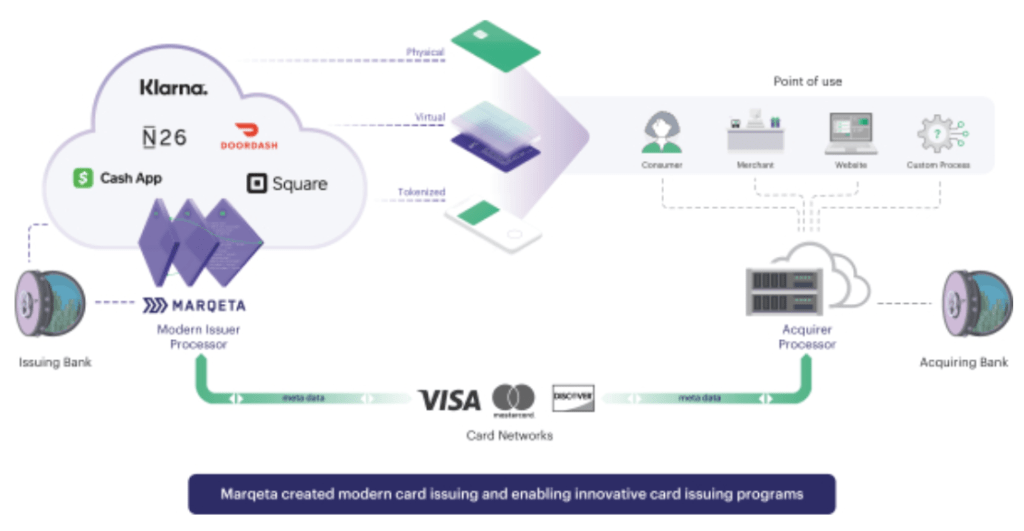 CEO Jason Gardner stated that the company’s initial strategy was to focus on developers. Marqeta created the back-end systems through well-documented open APIs that developers could use to embed payments into their offerings.

Open APIs are the main driver of software and payments converging today. They make it easier to build complicated but customizable financial products. Tech companies want to stay ahead of this trend and are increasingly partnering with payments companies to provide simple, scalable, and configurable payment services across the globe.

Meanwhile, developers at crypto exchanges like Coinbase and Shakepay use Marqeta’s APIs to allow customers to convert cryptocurrencies into government-backed fiat currency at the point of sale.

Marqeta has a strong set of both financial and non-financial clients. The company reported 160 customers as of December 31, 2020, up 24% from 2019. Customers use Marqeta’s products to provide solutions across different verticals:

Marqeta’s usage-based pricing model has resulted in dollar-based net revenue retention of over 200% for the past 2 years, highlighting the strength of its customer relationships.

Additionally, Marqeta’s total processing volume (TPV) grew 177% year-over-year in 2020. As Marqeta’s customers, which range from DoorDash to Brex, grow larger, this contributes to Marqeta’s TPV and revenue as well. 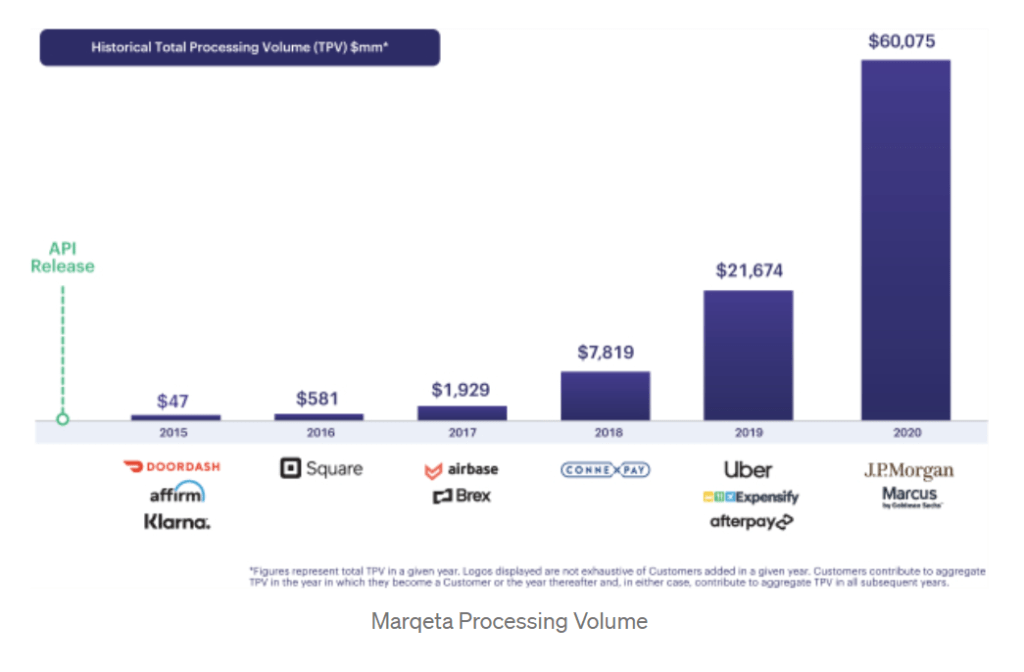 Marqeta is competing against legacy infrastructure giants like Global Payments and Fiserv, which process much larger payment volumes. Marqeta handles less than 1% of the $6.7T in transactions processed through US issuers in 2020, according to a Nilson Report estimate.

Major players in the space like JPMorgan Chase, Goldman Sachs, Visa, or Mastercard could also become competitors. Though Marqeta has strong business relationships with these companies currently, they could eventually build their own versions of card-issuing APIs since they operate at a higher scale and might want to stop relying on an intermediary.

This may not be a far-fetched possibility, as big players in the payments market have already attempted to buy fintech companies that provide API technology. In 2020 alone, SoFi agreed to buy Galileo, Mastercard bought Finicity, and Visa attempted to buy Plaid.

On the other end of the payment technology market, Marqeta competes with modern vendors, infrastructure fintechs, and other verticalized players like Adyen, Stripe, Comdata, and Wex. Take a deeper dive into the 60+ fintech infrastructure players here.

Marqeta’s platform may have a stronger card-issuing service, but Stripe and Adyen already offer similar products via API technology. For example, Postmates uses Stripe Issuing to create cards for its fleet of couriers, providing an on-demand delivery card issuing service similar to what Marqeta does with DoorDash. Meanwhile, Adyen offers physical and virtual card API integrations and will be launching mobile wallets later this year.

Although Marqeta doesn’t explicitly address the disruptive potential of cryptocurrencies in the payments processing space, it may need to consider adding these services to compete with big payment players already entering the market.

Visa and Mastercard have both entered the crypto space this year. Visa is allowing the use of USD-backed stablecoins to settle transactions on its payment network through a partnership with Crypto.com. Meanwhile, Mastercard partnered with crypto exchange Gemini to launch the first credit card that gives users digital currency rewards on purchases later this year.

The move into crypto makes sense, as crypto enables secure direct payments and cuts out intermediaries. If it becomes a more widely accepted form of direct payment, it could affect Marqeta’s business.

reliance on few customers and partnerships

Currently, Marqeta serves as the issuing partner for both the Square Card (a business debit card) and Cash App. Marqeta has contracts in place with Square that expire in 2024, and if Square doesn’t renew, it could pose a huge risk for the business.

Like many other fintechs, Marqeta’s business relies on a partner bank. While Marqeta provides card-issuing technology, it requires banks to issue payment cards to customers and settle payment transactions on the cards behind the scenes. Marqeta’s key partner is Sutton Bank, which settled 96% of its volumes in 2020 and 95% of volumes in Q1’21.

Under the current agreement with Sutton Bank, Marqeta earns 100% of the interchange fees. Marqeta pays Sutton Bank a fixed percentage of each transaction. The partnership expires in 2027 and renews in 2-year terms. If Sutton Bank terminates the agreement, Marqeta’s business will be dramatically affected unless it expands its partnerships with other issuing banks.

Marqeta also partners with card networks including Mastercard, Visa, and Pulse. This means that the company can issue cards on all 3 of these payment rails and can diversify its risk if it’s able to add more card networks.

While Marqeta has a lot of room to grow, there will be more fierce competitors eager to capitalize on card issuing technology and API integration in the US and globally.

Although its revenue has grown, Marqeta is still not profitable. The company reported net losses of $47.7M in 2020, a decrease of 18% from 2019. This is not surprising as some fintech startups were not profitable when they went public. For example, insurtech Lemonade reported a net loss of $109M in 2019 in its S-1.

Compensation and other benefits accounted for most of Marqeta’s total costs. This is expected, especially as the company scales. Marqeta doubled its employee headcount from 233 employees in 2018 to 509 employees in 2020. Despite top-line growth, Marqeta’s continued losses showcase its room for improvement.