Quarterly deal activity shot up in Q3'16. However, there have been no rounds of $100M+ to marketing tech companies this year.

Marketing tech startups saw a 91% increase in dollars invested between 2012 and 2015, when dollars peaked at approximately $3.6B. This year, investors have put just over $2B into private companies in marketing tech through 10/25/2016.

While 2016 is on track for a decline in deals and dollars, Q3 saw a big bounce back, reaching a near-record high for deal activity in marketing tech. Over half (52%) of those deals were for companies in the seed/angel stage.

Investment in marketing tech is very focused in the US market. Since 2012, 67% of the world’s marketing tech funding rounds have been for US companies. Likewise, US marketing tech startups took 71% of all the dollars invested in the space over the last five years.

AppNexus has recently seen notable declines in its Mosaic score, our scoring algorithm for tracking private company health. The company has lost 40 points in the Momentum component of its Mosaic score, which is tied to web traffic, social mentions, job postings, and news sentiment. News tied to AppNexus has spiked recently due to the company laying off 11% of its workforce. AppNexus’s Momentum score has declined to 910 (out of 1000) from 950.

We used CB Insights data to dive deep into marketing tech funding trends. In this research brief we cover:

We define marketing tech broadly as tech companies with a core product or service whose primary use case is to enable marketers to manage marketing workflows; digital content and apps; online advertising, social, and email campaigns; and analytics.

At the current run rate, deal activity and dollars are projected to come in below 2014 levels.

This year, there have been no mega-rounds of $100M+ to marketing tech companies. The largest round so far in 2016 went to the company Jana Mobile, which secured a $57M Series C investment in July, from investors including Verizon Ventures. Well over half (64%) of the deals in marketing tech this year have been for $2M or less. 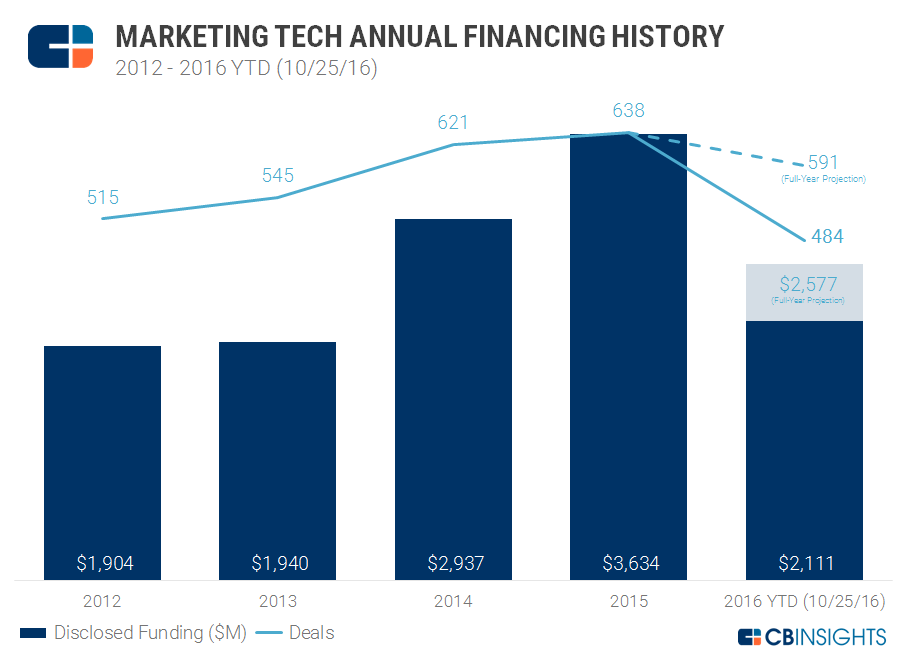 Despite the slump on an annual basis, deals were near an all-time quarterly high in Q3’16 at 170, and dollars are also starting to tick back up from four straight quarters of decline after the peak in Q1’15. 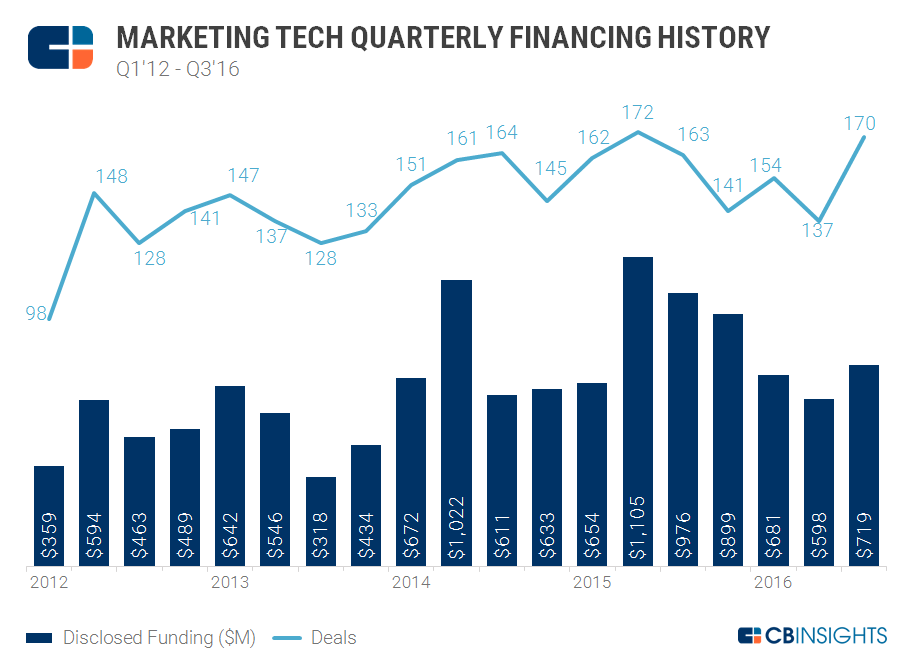 Since 2012, investors have consistently placed ~45% of their bets on early-stage marketing tech companies in seed/angel stage, while the share of deals going to Series A companies has declined over the last five years.

Series B stage investments have also declined slightly over the time period. On the flip side, the Other category, which includes debt/convertible note deals among others, has increased from 11% of deals in 2012 to 21% in 2015 and 2016 YTD. 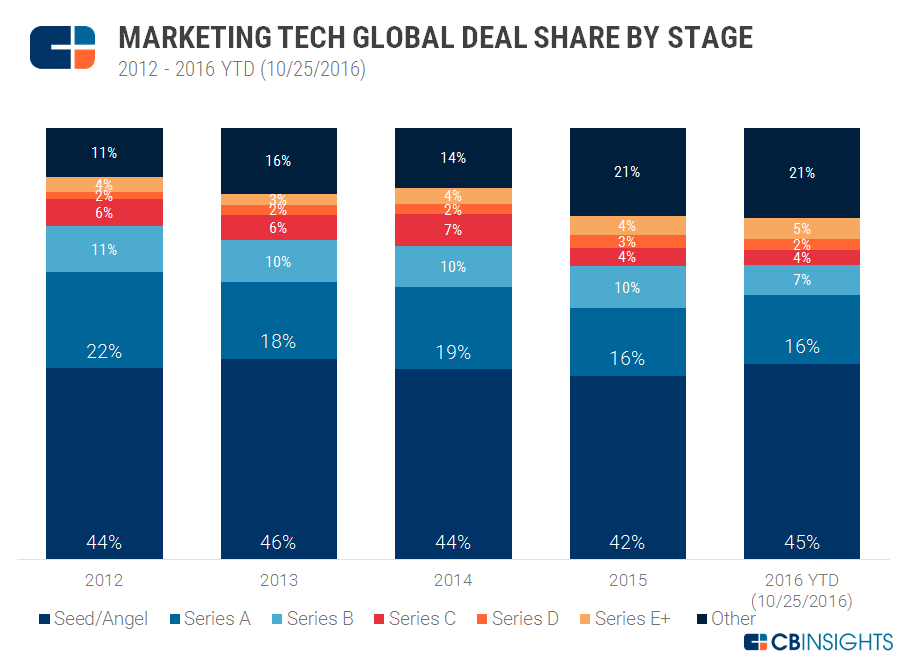 The most active VC in marketing tech is 500 Startups. Rounding out the top three are Kima Ventures and Salesforce Ventures. Intel Capital is the only other corporate venture arm besides Salesforce on the list.

The most well-funded marketing tech company is the unicorn AppNexus, valued at $2.2B with $394M in total disclosed funding.

While nearly 70% of dollars and deals in marketing tech go to US-based companies, two of the top three most well-funded companies are international: Australia-based Campaign Monitor, and another unicorn, China-based Panshi, valued at $1B. All of the companies on the most well-funded list have raised above $100M.

Want more data on marketing tech startups? Log in to CB Insights or sign up for free below.