The CB Insights newsletter (subscribe here) recently featured the image below highlighting that Taco Bell has been voted the best Mexican restaurant in the US.

We received a response from a subscriber explaining the trick that market researchers use to do this. We thought the explanation was enlightening and so, with the subscriber’s permission, we’ve shared it anonymously below. 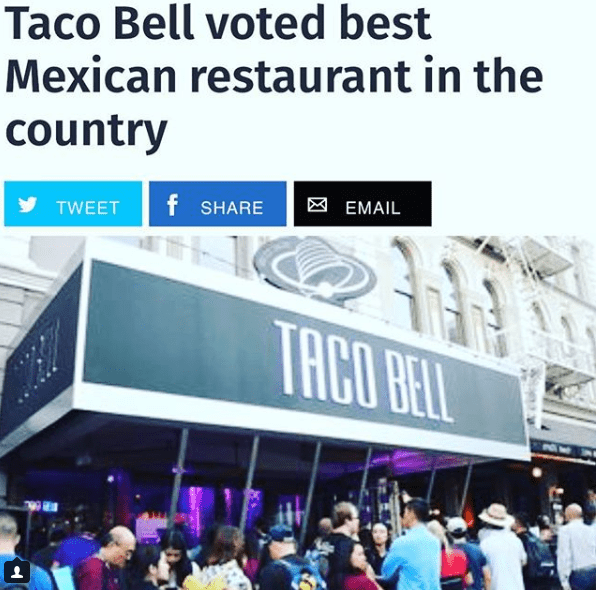 Taco Bell is NOT the best Mexican restaurant in the country, it is just the closest to being everywhere.

Unless you live someplace with no local/regional Mexican restaurants at all, pretty much everyone in the country could name a great local Mexican restaurant in their town or neighborhood run by Mexican immigrants or inspired, authentic restaurateurs.

But there is no way that all the great, local/regional Mexican restaurants could ever amass the number of votes to compete with a Taco Bell. The limited cities and towns are just not big enough.

I’m a long time marketing researcher (35+ years) and I learned this trick in my first job back in the mid-80’s.

Plenty of local to regional brands could win out over Jimmy Dean in the area of their dominance. There was Bob Evans in the Midwest, Tennessee Pride and Rudy’s Farm just south of that, Bryan in the Southeast, and so on, across the country.

But there were enough people everywhere who would vote for Jimmy Dean.

Jimmy Dean invariably got more votes than any of the other regional brands, and its national advertising proclaimed that. My boss — the president of the little research firm that did the research — got hauled up to New York by some regional company to testify in front of the FTC on a truth-in-advertising claim.

He went with the questionnaire and report in his briefcase and came home a winner. If you ask a question as close as possible to the claim you want to make, and ensure you survey a representative national sample of category users, any national chain in any category will beat competitors that are superior but only regionally available.

As a result of this research and ad campaign, one of Jimmy Dean’s regional competitors actually did its own research, but only in its regional area. The company found that it could beat Jimmy Dean in its region, and made its own ads that said in effect, “Did you really want to eat a breakfast sausage that people in both New York and San Francisco ate? No, you want (our) brand that tastes better to people like you and me here in (their local region).”

Taco Bell is basically what every fast food restaurant is: passably pleasing to most of the non-discriminating populace that values price and speed over deliciously prepared, authentic Mexican food brought to your table in your favorite local restaurant.

And because Taco Bell is pretty much ubiquitous, and enough people everywhere will vote for it because they haven’t found good, authentic Mexican food in their areas, it wins this title. There is no way that local restaurants, or even good regional chains, could compete with the sheer numbers of a national chain.