Maersk and other maritime logistics players, which handle 90% of globally traded goods, are exploring blockchain to increase efficiency and transparency in global trade.

It currently takes a stack of 200 communications between 30 different parties to ship a container from Mombasa, Kenya to the Port of Rotterdam, according to a recent study by shipping carrier Maersk. With each additional piece of paperwork, the risk of fraud, miscommunication, and delay increases.

To combat this barrier to trade, Maersk is partnering with IBM to incorporate blockchain distributed ledger technology into its shipping process.

By allowing all parties in the global shipping supply chain to share information through a digitally secure distributed ledger, blockchain technology could revolutionize the maritime logistics space, eliminating the complex current system of disparate, expensive, and time-consuming paperwork.

Maersk and its 6 largest ocean shipping competitors, together, hold more than 50% of global maritime container shipping market share. Even if only these companies implement blockchain into their operations, it could significantly increase the speed of international trade, while also boosting transparency and reliability into the notoriously opaque container shipping industry.

Blockchain integration could also affect other players along the supply chain including freight forwarders, brokers, importers, exporters, manufacturers, brands, retailers, and beyond. 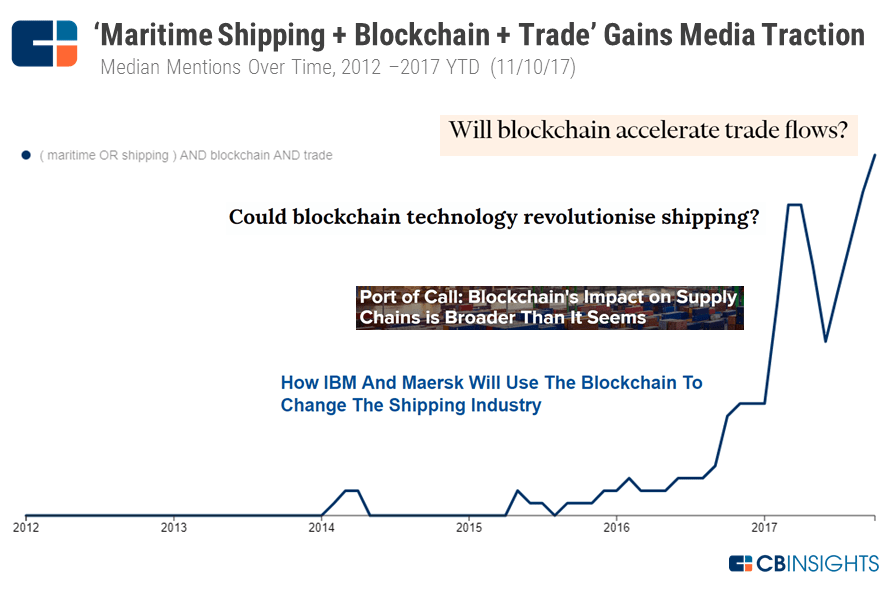 Other global supply chain players, beyond maritime logistics, are also showing an interest in blockchain. In August 2017, Walmart, Kroger, Nestle, and Unilever, among others, partnered with IBM to use blockchain to improve food safety through improved supply chain tracking.

While blockchain integration by these specific vendors could speed up their individual supply chains, blockchain adoption by maritime logistics companies, which help transport 90% of globally traded goods, could have a much further-reaching effect.

Beyond speeding up trade, blockchain has other applications in maritime logistics, spanning areas like cybersecurity, marine insurance, and seaport-related operations.

Prominent players in the space, such as shipping carriers and port operators are exploring these use-cases by partnering with large corporations, blockchain startups, and consortia (groups of independent companies or entities partnering to use blockchain technology).

We created a timeline showcasing select partnerships and initiatives in 2017 in the maritime logistics space. As can be seen below, activity has significantly increased as recently as July of this year. 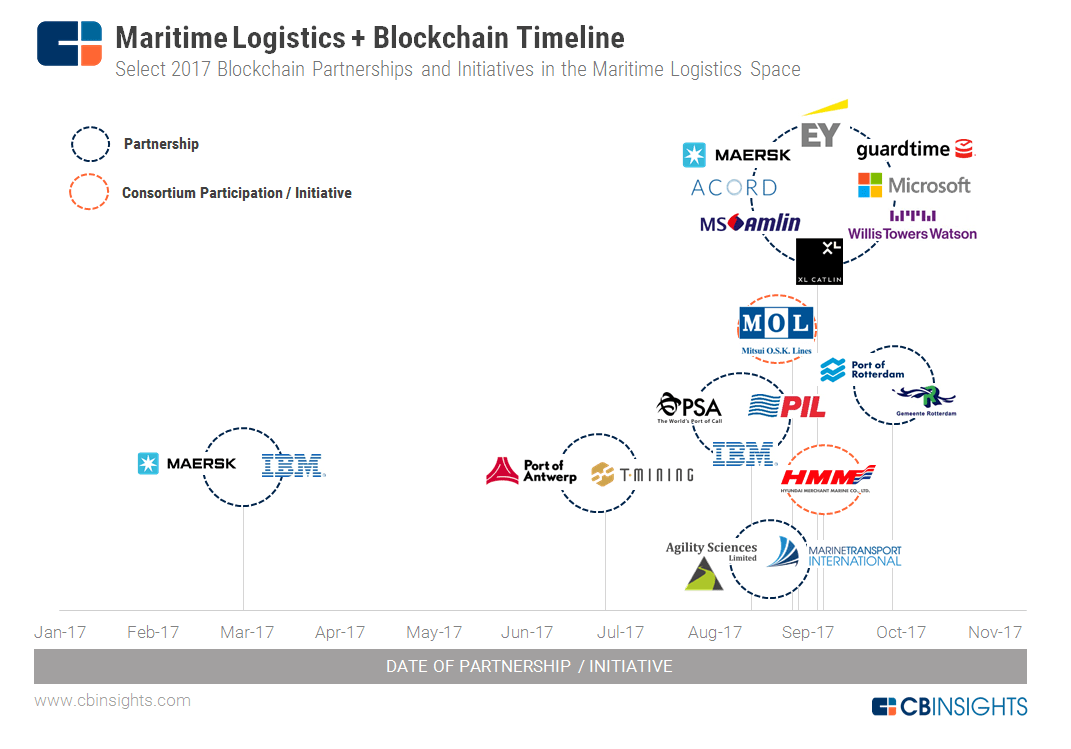 The partnerships highlighted in this timeline can be grouped into the following categories:

Trade efficiency: In March 2017, Maersk partnered with IBM to integrate blockchain technology into its supply chain and shipping processes. As discussed above, partnerships like this have the potential to impact global trade by reducing complications in communication.

Port operations: In June, the Port of Antwerp partnered with blockchain startup T-Mining to improve safety and speed of container handling.

Most recently, the Port of Rotterdam partnered with the Municipality of Rotterdam to create “BlockLab,”‘ an initiative focused on researching new applications for blockchain in the maritime logistics space.

In addition to the companies mentioned above, other blockchain startups have the potential to impact the maritime logistics space going forward. For example, Wave connects disparate players within the shipping supply chain to bolster paperless communication, which can mitigate miscommunication, delays, and fraud. The startup received $120K in funding from Barclays Accelerator in 2015. 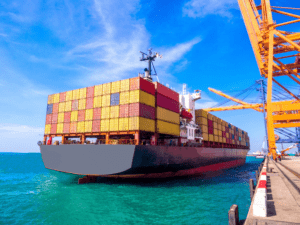 300cubits, a Hong Kong-based startup, recently conducted an initial token sale of a new cryptocurrency dubbed “TEU,” which could change the way players in the maritime logistics industry create contracts and pay for services.

While full blockchain adoption in the maritime logistics space is in a nascent stage, its potential impacts on efficiency and security are a driving force behind many partnerships forged over the last year.

Blockchain’s integration into maritime logistics has the potential to impact the international economy, affecting everyone along the global trade supply chain — from suppliers and importers to retailers and brands, and ultimately even consumers.