Research Brief
1363
66% of VC deals happen in the 3 major VC markets (Cali, NY and Mass) but they take a disproportionate share (90%+) of the largest financing valuations.

With more scalable technology and lots of early-stage money it is easier than ever to build a tech company today regardless of location, right? Maybe but when it comes to big valuations, it’s hard to get one if outside of major venture capital hubs.

We looked at the data of all $500M+ valuation VC-backed US tech company financing rounds since 2011 and found that thus far in 2014, major venture markets (CA, NY, MA) have dominated all other US geos taking 93% of the mega-valuation financing rounds.  This is notable because the 3 venture capital hubs took 66% of VC deals and 80% of VC dollars in Q2 2014. Notable non-major market financings in 2014 include an $125M series C which valued Utah-based Domo Technologies at $825M, as well as an $100M series C which valued another Utah company, Insidesales.com at $1B. 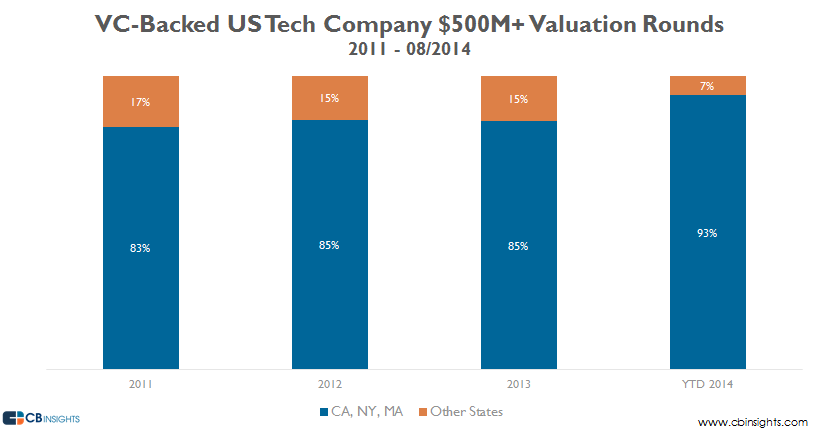 Want to track the startup companies getting big valuations? Login to the CB Insights venture capital database or create a free account below.