With early investments in several unicorns such as Uber and Stripe as well as homerun exits like Twitter and Instagram, Lowercase has probably the best seed investment performance of any VC - ever.

Founded by Google Alum Chris Sacca, Lowercase Capital has made a name for itself with prescient early bets in companies like Instagram and Twitter which exited for billions later. Sacca was also among the early adopters of special purpose vehicles which he used to increase his ownership of Twitter over time.

Perhaps more remarkable is the fact that the current exits are just the beginning for Lowercase. With giants such as Uber, Stripe, and Automattic in its portfolio, Lowercase is poised to score returns from several large exits in the future. These prior exits coupled with Lowercase’s unrealized portfolio could make it the best performing VC fund ever.

So given Lowercase’s success, we wanted to dig into CB Insights’ data on the firm.

This Lowercase Capital Teardown uses the CB Insights’ Investor Analytics tool to analyze its financing history, exit activity, and industry areas of focus to analyze the moves that the firm has made.

Lowercase is an early-stage tech investor, but is not opposed to financing companies in other sectors (ie. Blue Bottle Coffee) or financing companies into later stages. As can be seen from the chart below, the deals that Lowercase takes part in are generally restricted to the seed round, with an elite few including Uber receiving follow-on funding.

– Automattic (creator of WordPress) $160M Series C round, one of the rare exceptions where Lowercase made its initial investment in a round later than Series A.

-Two rounds in Twitter as well as buying shares from other investors through secondaries and aforementioned special purpose vehicles. The fund led by Lowercase ended up becoming the second highest shareholder behind Twitter cofounder Evan Williams.

-Participation in 4 rounds of investment in Uber, starting from the seed round where the company was valued at $4M. The company leads the unicorn companies being valued at $40B.

Below is a graph of Lowercase Capital’s quarterly investment participation (deals & funding) over time from their profile on CB Insights. On average, the firm makes 4 investments per quarter based on the last 5 years.

Lowercase is an early-stage investor focused on the seed stage, with 56% of deals in the last two years happening at the seed/angel round. Seed and Series A combined make up over 85% of Lowercase’s deals, with the average Series A deal being about 4 times larger in size. The firm is returning to making mostly seed deals, as shown by the negative YoY growth in Series A and B investments.

Exit Activity: Few homeruns with more in the pipeline

Lowercase has had more than 20 exits in the last five years, with a few homeruns to return the fund several times over. The most notable exits are:

Below is a scatterplot of Lowercase Capital’s exits with disclosed valuations, taken from their profile on CB Insights.

With the exception of Automattic, Lowercase invested in the seed round of each of these companies and can expect to receive a significant return on their investment if and when these companies exit.

Lowercase first fund was only $8.5M in size, but generated massive returns due to the investments in Twitter and Instagram. Despite the incredibly high returns the firm is experiencing, they have kept their fund sizes consistently under $50M (and cowboy themed) to maintain their strategy and focus on early investments in small companies with lots of growth potential. Not included are the SPVs Lowercase raised, most notable to buy secondaries in Twitter (mundanely named Institutional Associates Fund LLC. and Compliance Matter Services LLC).

Lowercase Capital’s focus is on the Internet sector, with the primary industries being Content Management (Automattic), News & Discussion (Medium, Nuzzel), and On-Demand (Styleseat, Moveline Group). Lowercase also features a steadily rising amount of deals in the Mobile sector. In addition to its multiple rounds of investments in Uber, they have invested in two rounds of funding for mobile dating app developer Cleod9 (dba Hinge) totalling $17M, as well a few other mobile companies. In total, Lowercase has increased the number of deals in this space by 63% in the past two years.

Of Lowercase’s total deals in the past two years, 63% were in California with New York and DC coming after. Notable investments outside of the Golden State include Chartbeat, Campus Bellhops and Hinge. The firm used to be more involved in Massachusetts-based companies, with 6 deals being made from Q1’11 to Q1’13 vs. only one deal being made between Q1’13 and Q1’15.  While the absolute number of deals in New York has remained relatively consistent, they became a smaller part of the activity as the firm ramped up deal activity in the last two years (mostly in California).

Lowercase focuses on getting into companies early, and rarely follows into later rounds (allowing deeper pocketed investors to continue into the later stages). Almost all follow on investments have been in Series A rounds after a seed investment from the firm, with some exceptions including Automattic and Docker. The below excludes the SPV-related investments the firm has been involved with through other entities. 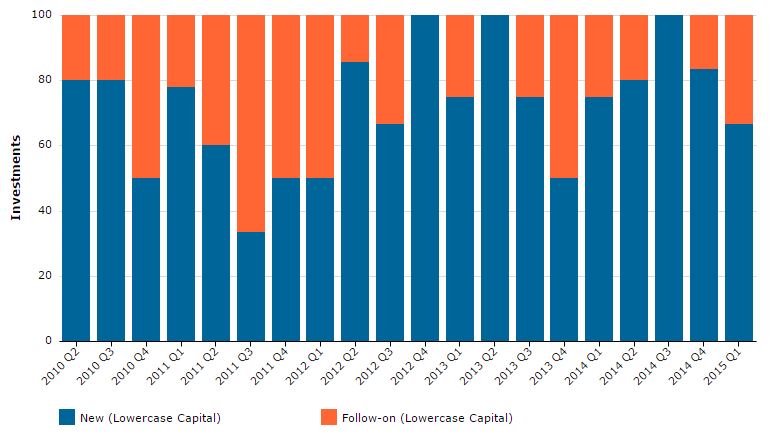 Syndicates: SV Angel and Y Combinator are the top co-investors

Lowercase is an avid investor in Y-Combinator companies as the Investment Syndicate dashboard below illustrates. Notable YC alum that are backed by Lowercase include 9gag, Stripe, and Docker. For its investments, Lowercase Capital partners mostly with similar seed stage VC firms such as SV Angel and First Round Capital. 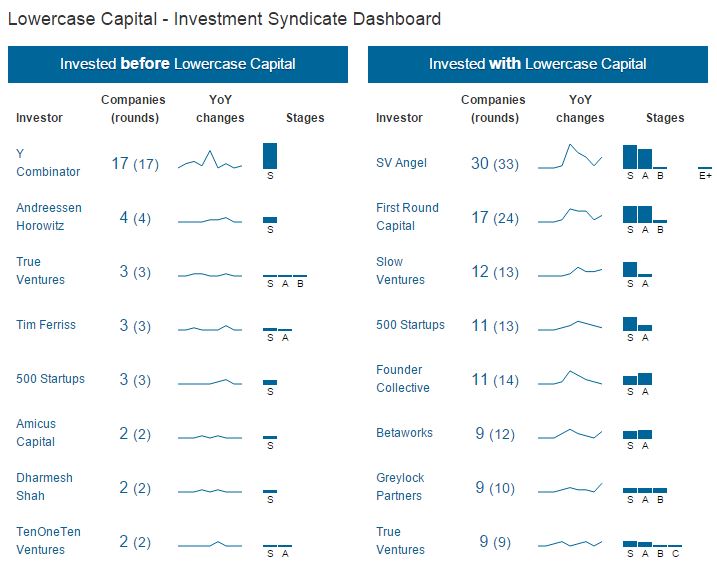 100% of the visualizations in this Teardown are from Investor Analytics. No MS Excel necessary.