Research Brief
2054
Our LA tech breakdown lists all the trends, investors, and companies that you need to know.

Los Angeles is a fast-growing and increasingly nationally important tech hub. Successful apps like Tinder and Snapchat have established headquarters in West Hollywood and Venice instead of the San Francisco Bay Area, and investors are following suit. Well-known entrepreneur and investor Mark Suster set up his Upfront Ventures firm in the area, taking advantage of the growing community of tech talent, founders, and entrepreneurs. Using CB Insights data, we outlined the trends shaping LA’s tech industry.

Investment into LA-based companies has grown significantly since 2012, with 2014 breaking past $3B of investment across nearly 400 deals. The first half of 2015 has already seen 182 deals with $2.1B invested, putting it on track to break $4.2B by year-end, a 285% increase in funding from 2012. Tech deals in 2015 as a whole have been down globally, and LA is no exception. Deal flow is shrinking and funding is increasing, meaning deals are getting larger (2015 saw two rounds totaling $537M+ of investment into Snapchat and a $186M growth equity roung invested into the now acquired Lynda.com). 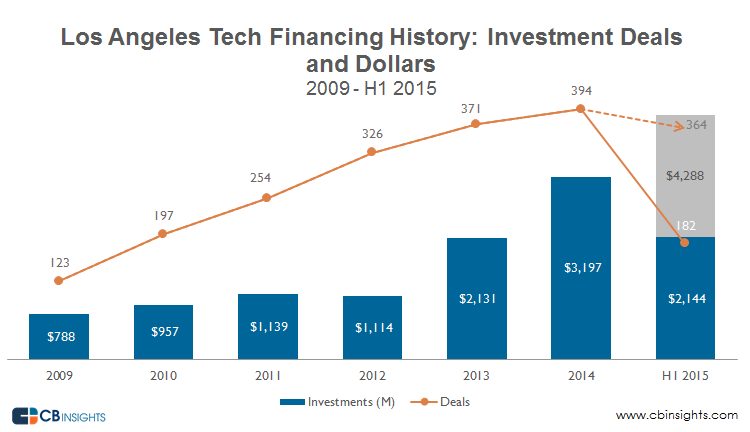 Deals at the Seed and Angel stages have seen a significant rise — and fall — in deal share since 2009, accounting for a peak of 63% of deals in 2012 and then falling for two consecutive years and hitting 40% in 2015’s first half. Series A has seen the opposite trend, with a decline between 2009 and 2012, followed by a resurgence in 2014 and the first half of 2015. Series E+ deals have also seen an increase in popularity in the first half of 2015, taking 16% of total deal share including deals into Machinima and Freshdesk (in 2014 these had only accounted for 9% of deals). 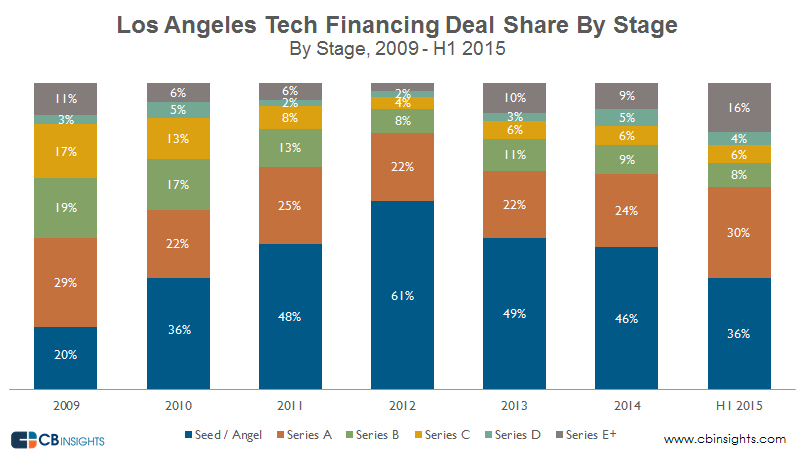 Dollar share by investment stage tells the story of the growing LA tech scene from a different angle: Series A dollar share has actually fallen off in terms of its proportion of funding. Since 2013, mid- and late-stage dollars grew as more mature companies required larger injections of cash including several $50M+ rounds into Dollar Shave Club, JustFab, and The Honest Company.

Snapchat was the biggest driver of dollar share, causing the spikes in Series D dollar share in 2014 and Series E+ in 2015. The company has raised more than $1B in total. 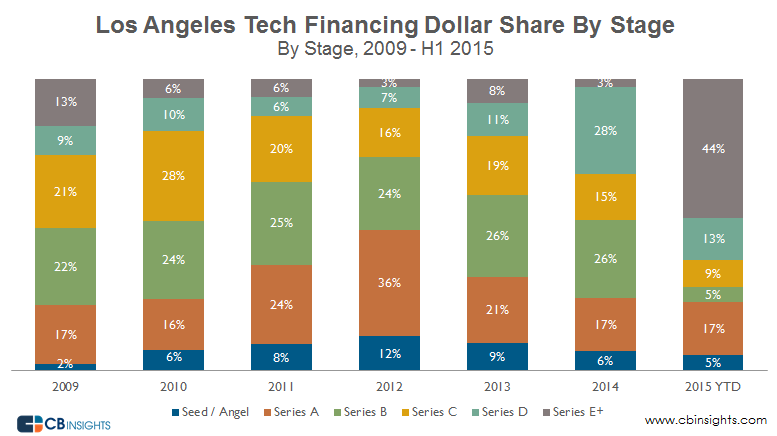 Internet is falling in investment popularity in LA, dropping to 61% of deal share in the first half of 2015, continuing a shrinking deal share trend that started in 2010 (though it remains the dominant tech category in the area by far). Mobile has seen an increase in deals in 2015, including early-stage deals into mobile e-sports live-streaming startup Mobcrush and smartwatch app studio Little Labs. Software has also seen a resurgence, growing for the past two and a half years and taking in one-tenth of total deals in the first half of 2015. 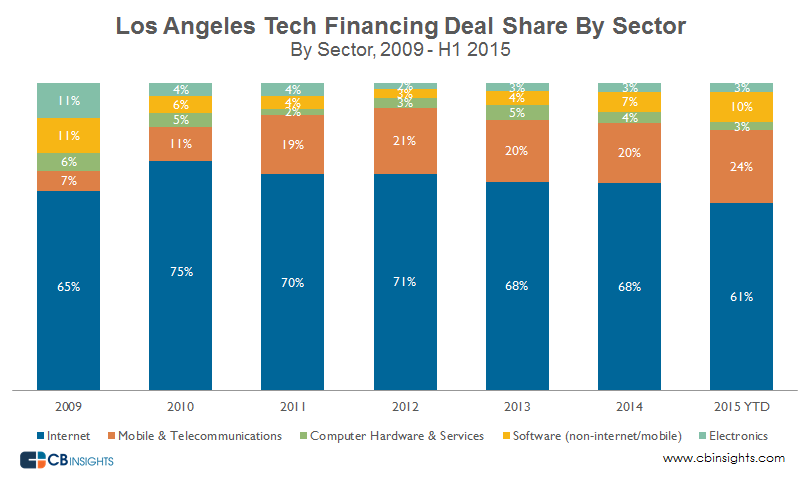 Los Angeles continues to grow in terms of exits, nearly quadrupling the number between 2010 and 2014. Out of the 128 tech LA tech exits last year, 4 were IPOs, including Rubicon Project and TrueCar, both of which were valued above $500M at IPO. 2015 is so far continuing that trend, with 77 exits so far, including the $1.5B acquisition of lynda.com by LinkedIn, and the $420M IPO for AppFolio. 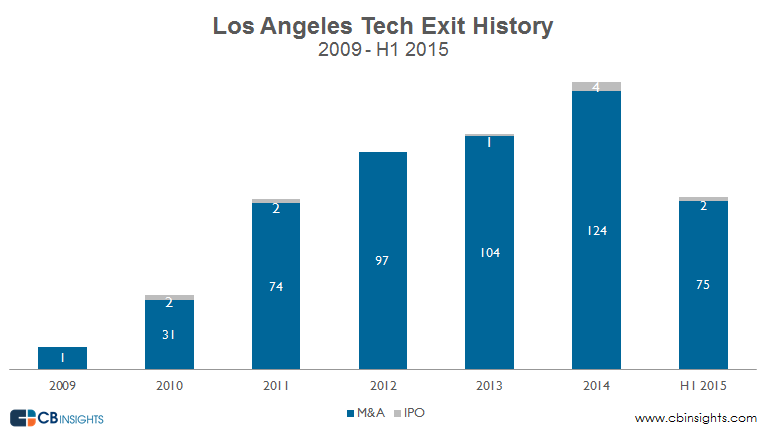 Though the LA tech scene may not be as big as it is in Silicon Valley and San Francisco, the city has still produced 3 unicorn tech exits since 2009, the most recent of which was the acquisition of lynda.com. More than half of the top exits have happened since 2014, and 5 of them have been in the form of IPOs.

Mark Suster’s Upfront Ventures is by far the most active investor in LA tech companies, with more than 35 companies financed since 2009. 500 Startups has made early-stage investments in just under 30 portfolio LA tech companies including Chewse, Club W, and Chromatik. Google Ventures was the only corporate venture capital arm to make the cut of top investors, though Intel Capital was not far behind (both with more than 10 companies invested).

When it comes to exits, Upfront Ventures also leads with large exits including TrueCar and Maker Studios to their credit. A little under half of the investors in the most-exited investors list are based in LA, with the top 3 most exited all having headquarters in the area.

The most well-funded LA startups

Below are the most well-funded LA startups through the first half of 2015:

*Analysis did not include debt and grant rounds