Lightspeed has been increasing its investment pace, averaging a little under 7 deals per quarter in 2009 compared to 15 last year.

This teardown features annotations & commentary by four partners at Lightspeed Venture Partners. As in all teardowns, the data analyzed comes from CB Insights. Thanks to the Lightspeed team for updating/confirming their portfolio data on the CB Insights Editor.

Lightspeed Venture Partners has been investing across a diverse set of sectors, industries, and geographies since 2000. The smart money VC firm has several notable successes under its belt along with a portfolio of highly valuable unexited positions (including the first investor check written into Snapchat).

Using CB Insights data on Lightspeed yields insights into their strategy, recent performance, and where the venture firm is seeing opportunity. The analysis includes commentary from partners at Lightspeed, including John Vrionis, Chris Schaepe, Ravi Mhatre, and Jeremy Liew.

*This analysis does not include Lightspeed China

1. Where’s the data & viz from? 100% of the visualizations and data you see in this teardown are directly from the CB Insights platform and its Investor Analytics tool.
2. What’s a Teardown? A product teardown is the act of disassembling a product to understand its parts, functionality, etc. An investor teardown is analogous in that we’re trying to understand a firm by analyzing data around their financing strategy, investment thesis, key people, exit history, investment syndicates, and more.

Lightspeed has more than doubled its investment pace since 2009, averaging a little under 7 deals per quarter in 2009 compared to 15 a quarter in 2015. Q1’16 also saw a deal activity high with participation in more than 15 deals in the quarter, though the pace has slowed down through the rest of the year. The firm has participated in more than 379 deals since 2009. Deal pace has grown as fund size and deal team has grown.

“The early-stage venture business is an art, a craft. Our approach isn’t to tell entrepreneurs what to do. We are in the boat together. What we do is hold up the mirror, ask the tough questions, and act like a concierge. You need something? We’ll find a way to help.”
— John Vrionis

The aggregate sizes of deals involving Lightspeed have also been getting larger, with deal sizes spiking in the last 3 quarters of 2015 due to 11 $50M+ financings into companies like Oyo Rooms, NetSkope, and Delphix. Lightspeed also touts the recent IPO of Nutanix at a $2.2B valuation. Lightspeed was the first institutional investor in the company and has at least 7 unexited unicorns in their portfolio: AppDynamics, Docker, MuleSoft, Snapchat, The Honest Company, Zscaler, and Stitch Fix. The firm was an early-stage investor in all of them (they were also the first institutional investor in Snapchat, now valued at $16B, as well as AppDynamics, Stitch Fix, and Honest Company).

Lightspeed Venture Partners has an impressive exit history, with 18 $1B+ exits through the years. 4 of those had first exits in the last three years. After a slowdown in portfolio exits between 2004 and 2010, there has been a significant uptick in more recent years. Some notable activity:

“We have enabled more first-time CEOs to achieve successful exits while continuing in the CEO role than almost any other venture capital firm. Lightspeed has been successful in enabling first-time CEOs in part because we started with this philosophy near 20 years ago. As a result, we have had a lot of run time developing the support systems and services required to enable first-time CEOs to scale, including strategy development, planning, recruiting, and mentorship with a large network of successful current and former CEOs.”

“I believe that we are in a tech innovation cycle that really is changing the world. Great tech companies can — and will — go public.”

Lightspeed has a global outlook in its investment strategy. The venture capital firm has invested internationally in Israel (enSilo), India (Shuttl, Oyo Rooms), and Europe and the UK (Teads), among other markets. Its investment pace outside of the US has increased considerably, with 22 deals happening in the last 2 years compared to a total of 22 from 2009 to 2013.

Simultaneously, Lightspeed has dialed back its activity in Silicon Valley (where its largest deals also happen, evidenced by the highest average deal size) and decreased its activity overall in SoCal. However, it remains active in Los Angeles investing in some of the biggest companies in the area (Snapchat, The Honest Company, etc.).

“Consumer tech has evolved such that engineering is no longer the bottleneck that it was for innovation. As a result we are seeing startups well beyond the Silicon Valley. Now only 20% of portfolio company investments I have led are based in the San Francisco Bay Area. Between Snapchat, The Honest Company, Whisper, Hollar, and Zest Finance we are likely the leading investor in LA companies not actually based in LA. As a result, I’m there at least once or twice per month.”
— Jeremy Liew 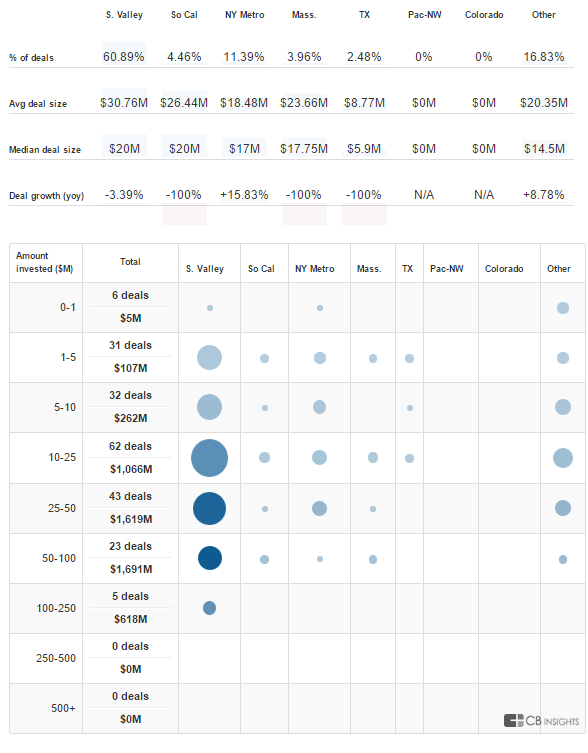 In earlier years, Lightspeed Venture Partners’ deal activity was more evenly spread across different stages. In the last two years, however, the firm has increased its investment pace at the seed/angel stage relative to mid and late stages (though the firm has participated in several Series D and later investments as well).

“Since the beginning, Lightspeed has been very active in seed investing, with seeds in our early funds representing over 25% of initial investments, a number which has grown over time. Early involvement is a core part of our strategy, and we have developed a services infrastructure in recruiting, business development and best practices which enables us to help first-time CEOs scale companies past the point of IPO.”
— Chris Schaepe

In the analysis below, the total dollar amount represented by each stage is indicated by the darkness of the squares, while the amount of deals is represented by the squares’ size. What’s interesting to note is that the sizes of Lightspeeed’s deals have gone up in the Series A, B, and C rounds. For example, Lightspeed invested slightly more frequently at the Series C stage in the later period, and the average deal size was $45.65M (compared to $17.25M from Q1’11 to Q1’13).

When looking at the two periods, the firm also nearly doubled the average size of deals it participated in at both the Series A and B stages.

The firm participated in several large mid-stage funding rounds that could have pushed this trend, including deals to Affirm, Oyo Rooms, and Everstring Technologies. With the raise of their second “Select” fund ($500M) in March 2016, we can also expect Lightspeed to continue to invest in the more capital-intensive later stage rounds.

Lightspeed has remained a relatively focused tech investor but has also made some bets in healthcare and energy as well. This broad sector strategy has not changed too dramatically through the years, though the firm has pulled back from energy investments, and has participated in larger deals in the internet space. The firm had prior large rounds within e-commerce including participation in several large rounds to LivingSocial several years ago and The Honest Company more recently. Lightspeed’s newer investments in the internet space have also included several content companies, including Cheddar, Mic Media, and LittleThings.

“Video consumption is rapidly moving from TV to online, mobile and TV-OS. These will be new platforms. What’s the killer app equivalent for video? It’s must-see shows and channels. We are going to see a new generation of tech-enabled media companies created that target these new platforms and their specific audiences.”

When we look at a more granular level into the specific internet industries that Lightspeed has been the most active in, it seems the firm has dialed down on advertising, sales, and marketing, while ramping up their deals and dollars into internet healthcare and business intelligence areas. Lightspeed has done double-digit numbers of deals into business intelligence in the last two years, compared to the Q1’11-Q1’13 period when it made no more than 5 bets in any given sub-industry. Lightspeed’s bets in intelligence/analytics in the last two years include deals to companies like Numerify, NetSkope, and Dremio.

“Our investment focus at its core is technology. But the individual sectors can change over time as technology creates new opportunities, and creates them at scale. For example – Bioinformatics created by big data, drones created by advances in regulation, AR and VR. The sectors, the new spaces – they change. You can’t just be wedded to one thing – it doesn’t work like that. The world moves too fast.

In the enterprise segment we invest in visionary entrepreneurs who appreciate that product strategy fits hand in glove with go to market strategy. Every investment we’ve made in the past few years has had this belief at its core.”
— John Vrionis

Lightspeed has historically been active in follow-on investing in their portfolio companies. Between 2011 and 2013, about 50% of deals each quarter were dedicated to follow-on financing for their companies. In late 2014 and early 2015, however, the company shifted slightly toward funding new companies, with several quarters seeing 50% or more of the deals going to new financings.

In late 2015 and 2016, however, Lightspeed shifted back toward follow-on deals, which accounted for more than 60% of the total. The company typically continues to participate in the follow-on rounds for stronger companies until a company reached the billion-dollar valuation mark, at which point they tend to back away. 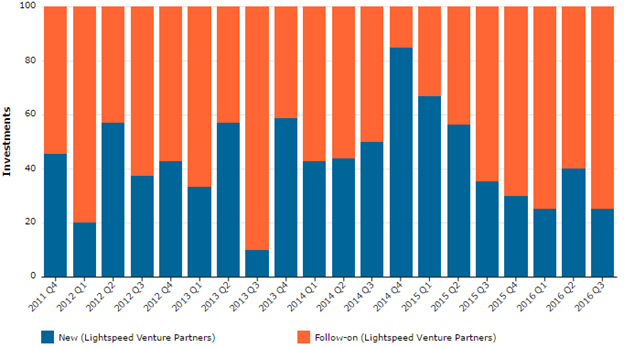 However, what’s most interesting is the large number of investors that frequently co-syndicate deals alongside Lightspeed. The firm has co-invested on 10+ deals with more than 30 individual investors. Because of their participation with many of their portfolio companies from early through late stages, the company frequently co-invests alongside various different investor types, including corporate VCs like Intel and investment banks like Goldman Sachs.
The company co-invests most often with NEA, sharing 58 deals across 22 companies at a variety of stages. 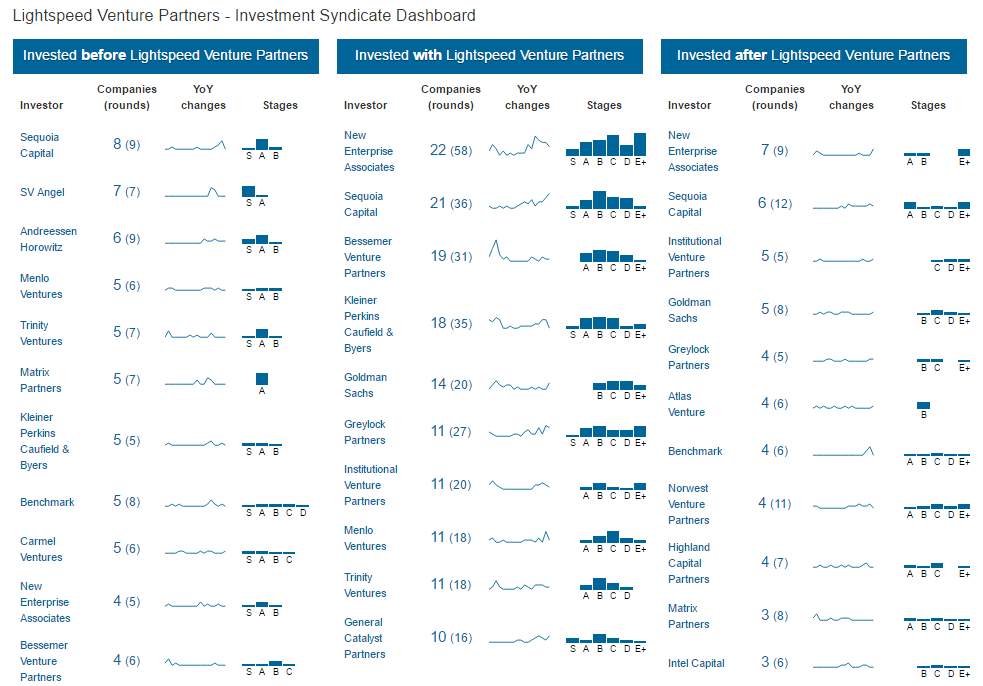 Want more in-depth information on investors? Check out our database below.