Deals and dollars to private tech companies in Latin America hit a high of $1.35B in 2017.

Investors from around the globe are flocking to Latin America — within the first half of 2018, deep-pocketed investors like Andreessen Horowitz, Sequoia Capital, and DST Global have backed startups in the region.

Private technology companies in Latin America have raised over $5.8B in funding since 2012.

We used CB Insights data to analyze Latin America’s tech ecosystem and take a look at which countries receive the most investor interest.

deals and dollars to latin america hit a high in 2017

Deals and dollars into Latin America hit a high in 2017 with 379 deals worth a total of $1.35B, according to CB Insights data. Since 2012, investments into the region have nearly tripled. 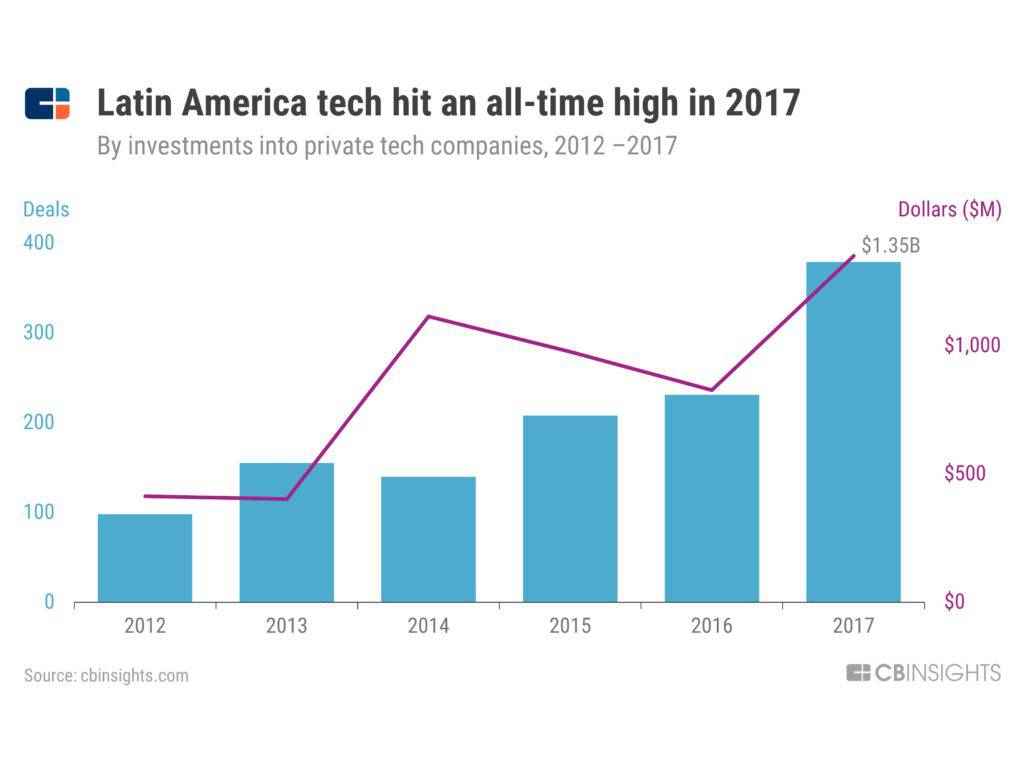 BRAZIL RECEIVES THE MOST ATTENTION

Within Latin America, Brazil attracted over three times the number of deals as Mexico. 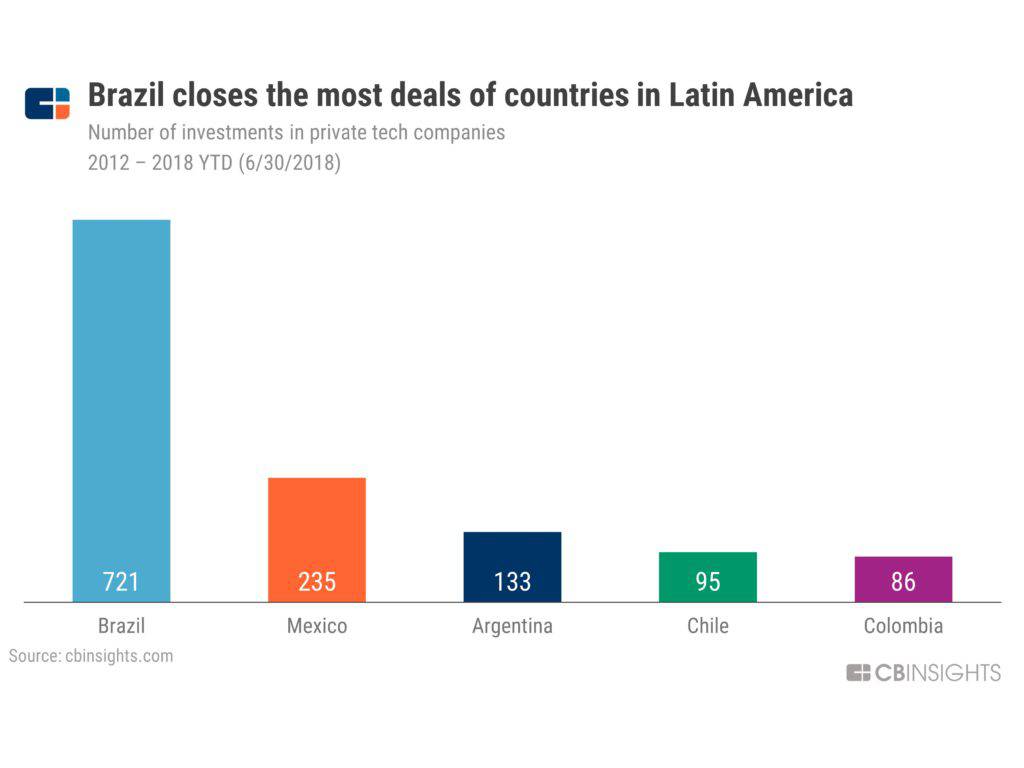 Investment totals further amplified the skew toward Brazil, with the country raising $4.2B in deals since 2012 — nearly seven times as much as either Mexico or Argentina. Despite closing fewer deals, Argentina brought in approximately $600M worth of deals, slightly above Mexico at about $570M. 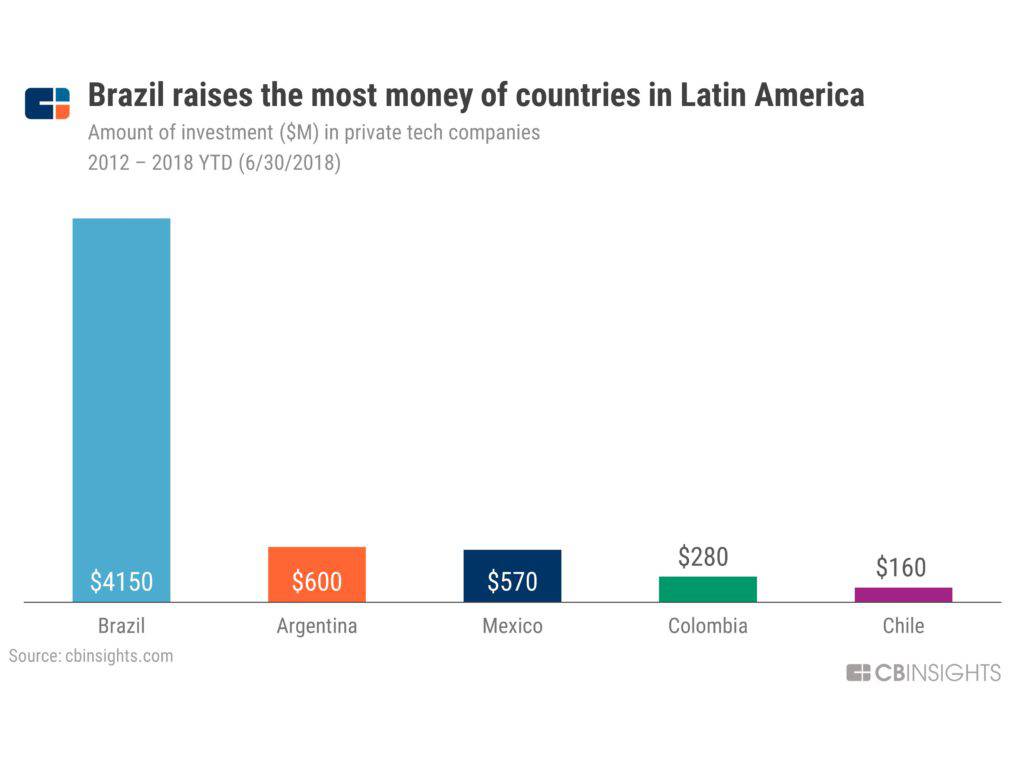 MEGA-ROUNDS TO BRAZIL EXPLAIN THE SKEW

Brazil has received the lion’s share of investment in the region largely because of the mega-rounds (deals above $100M) that have gone to the country. Brazil took up eight of the 10 largest rounds in Latin America since 2012. However, the biggest round went to Argentina’s Decolar, which received a $270M corporate minority round in Q1’15 from Expedia. Decolar runs online accommodation and flight booking sites across several countries in Latin America. It went public in Q4’17 and was valued at $1.7B at the time.

Nubank, a Brazil-based fintech that is the most well-funded startup in Latin America, also closed one of the region’s largest rounds, with a $150M Series E round in Q1’18 that included DST Global and Founders Fund. In total, Nubank has raised $605M in funding across 10 rounds and is considered a unicorn (valued at $1B+). Nubank’s other investors include Tiger Global, Sequoia Capital, and Goldman Sachs.

Other significant deals include those to Brazil’s 99, which raised two rounds worth $100M in Q1’17 and Q2’17. The first round was a Series C round that included Chinese ride-hailing unicorn Didi Chuxing and the second was a private equity round from SoftBank Group. 99 is a ride-hailing company that has also raised funding from Qualcomm Ventures and Tiger Global Management.

OUTSIDE of BRAZIL, DEALS WERE MUCH SMALLER AND MORE SCATTERED

Companies in Latin American countries outside of Brazil closed only two mega-rounds. Excluding Brazil, 50% of the ten largest deals went to Mexico, 30% to Argentina, and 20% to Colombia.

Multiple large rounds went to Mexico’s Linio, including a $79M Series C round in Q3’14 and a $55M Series D round in Q4’16. Linio is an e-commerce site that operates across Latin America.

Several accelerators also had a very active presence — the most active by far was 500 Startups, followed by Y Combinator.

Investors from the United States have shown increasing amounts of attention toward Latin American tech. The number of unique deals involving US-based investors increased nearly 60% between 2016 and 2017. 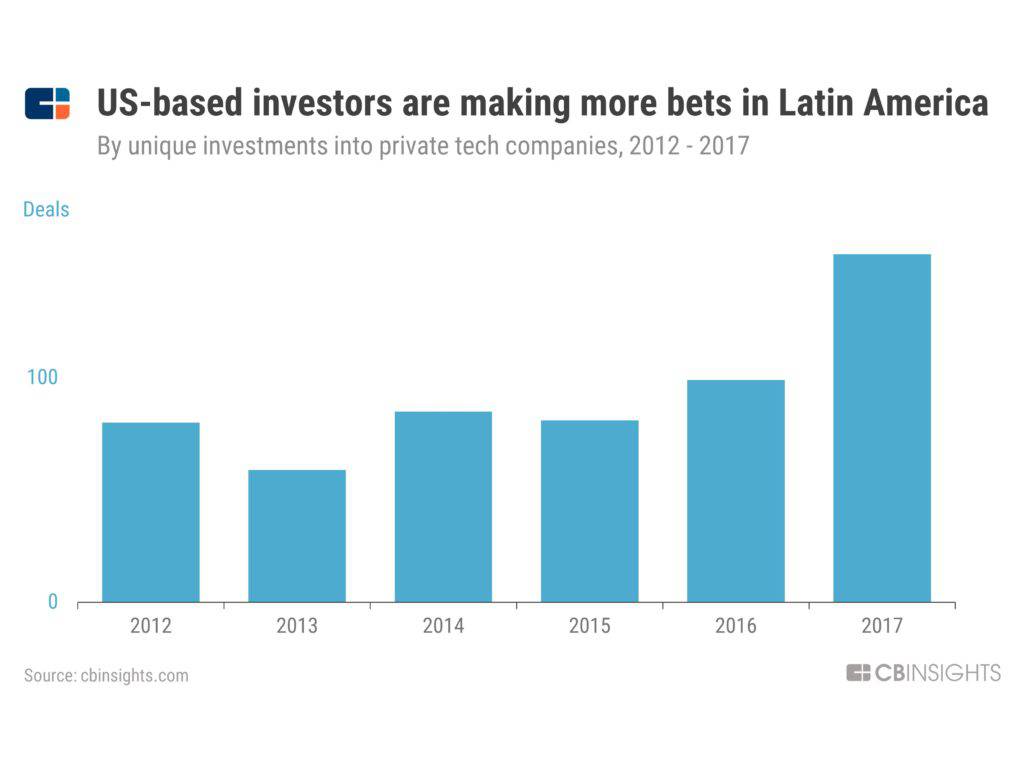 However, investors from other parts of the world also showed more interest. While US-based investors participated in 49% of all 2012 private tech deals in the region, that number declined in the following years. By 2017, only 32% of all tech participation came from United States investors. 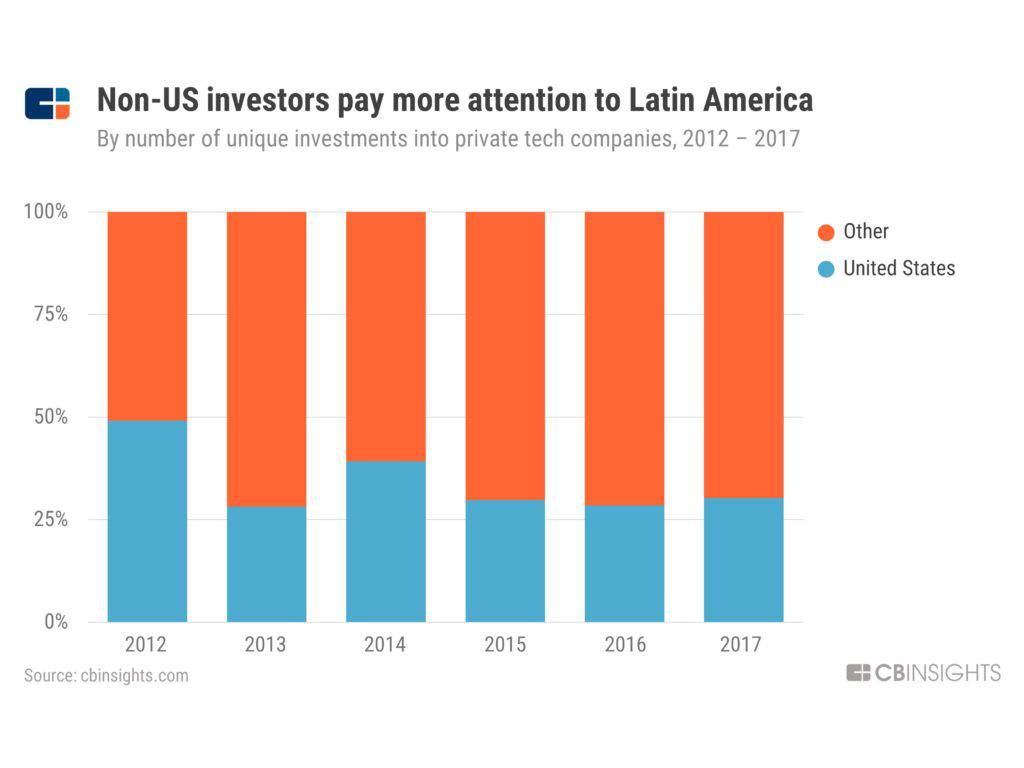 2017 also marked the year with the highest activity from Latin American investors yet. 50% of all participation came from investors within the region. Of that number, 60% of investors came from Brazil. 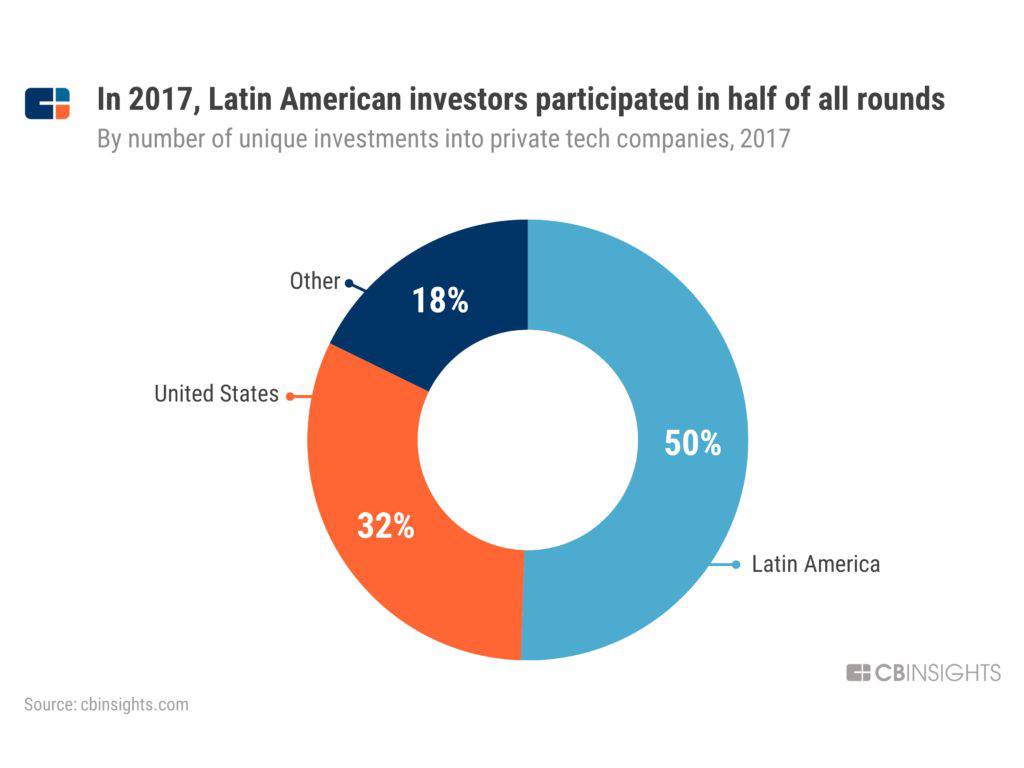 with unstable growth in other markets, brazil continues to dominate

Despite continued dominance in the region, Brazil posted the highest growth numbers of any Latin American market.

Albeit slow, other countries did experience growth. Colombia, for example, went from just 3 deals in 2013 to 38 in 2017, its highest number yet. Other countries saw fluctuations in growth. After a slump from 26 deals in 2015 to 18 deals in 2016, Argentina sprang back up to 24.

However, despite on-and-off trends in other countries, we can expect to see Brazil continue to dominate the Latin American region in both growth and sheer numbers. Its proven tech ecosystem and wide range of investors also make it a possible launching point into the other countries in the region.