Research Brief
1701
The growth in late stage tech deals, $100 million+ financings and the players in the late stage investment ecosystem are all eye-popping.

Tech companies are staying private for longer, and a big driver of that is the available financing in private markets especially in later stage rounds. The number of investors in later rounds have increased dramatically as well. While historically, late stage tech investing was the territory of the aptly named late-stage VC or growth equity firm or the odd tech focused private equity firm, today, we have mutual funds, hedge funds, sovereign wealth funds and corporations all jumping into the late stages as well.

We used CB Insights data to quantify just how large this late stage tech boom is by looking at the investors in Series D+, Growth Equity, Private Equity, and Corporate Minority rounds into tech companies.

On a pure volume basis, the data highlights a huge increase since 2010 in just the absolute number of late stage deals. In 2010, there were less than 400 compared to more than 950 in 2014. The zeitgeist around unicorns has driven a 160% increase in these late stage rounds. The biggest jump as the graph below illustrates was between 2013 and 2014, which saw a 42% yoy increase.

Mega-financings or deals where $100M+ is invested have also increased, with more than 300 happening in 2014 compared to fewer than 70 in 2010, a 394% increase. These well-heeled hedge funds, mutual funds, etc are not just investing in greater numbers but are willing to put a lot of money to work when they do. 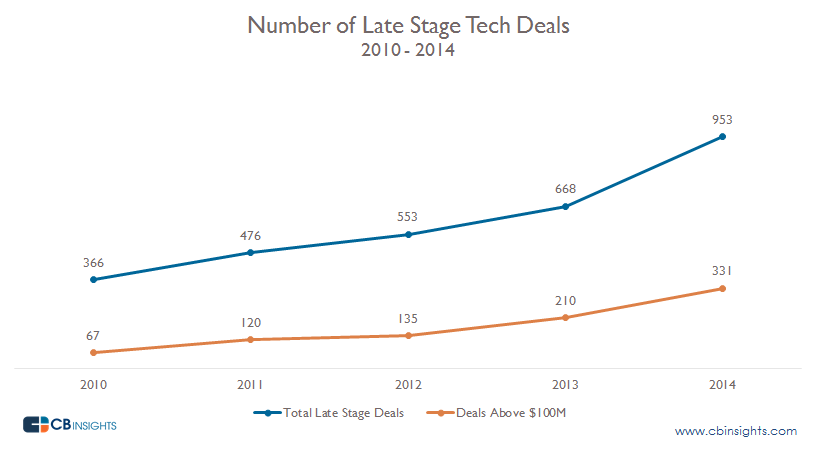 The number of investors in $100M+ late stage tech deals more than doubled in 2014 as more firms with deep pockets drove money into tech.  The push into late stage rounds also pulls some investors into this segment of investing who are not otherwise familiar with it – for example, Rakuten’s uncharacteristic large investment in Lyft recently. 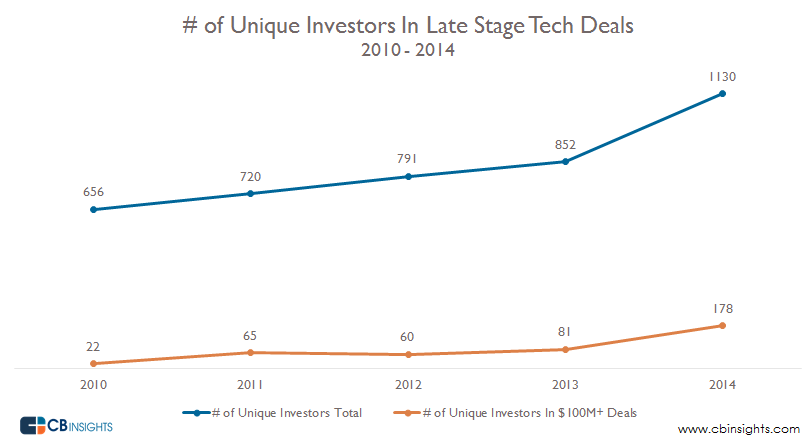 When we isolate the investors that are a part of late stage deals above $100M, the table is full of mutual funds, hedge funds, and some other unusual suspects. A handful of VCs pop into this list but most of these firms are not the major contributors to these rounds but firms exercising and hoping to maintain ownership levels in companies they invested in much earlier.

Want to track late stage startup financing globally? Login or sign up below.