The list of high-profile venture-backed companies that have raised financing rounds in the hundreds of millions in 2014 is significant – everyone from Dropbox, Slack, Lyft, Box and Square. But perhaps lost in the headlines about future unicorns is how huge financings can also be huge failures.

Working with our friends at StrictlyVC, we analyzed CB Insights’ data on the five largest financing deals to venture-backed companies in 2010, 2011, 2012, 2013 and 2014 YTD for U.S.-based companies to see how some of those companies have faired. And while the data highlights some of venture’s biggest homeruns (and potential homeruns), it also demonstrates that big dollars can also lead to big flops.

As the chart below highlights, mixed in between names like Facebook, Uber and Twitter are Better Place (now bankrupt), Fisker (bankrupt then bought by Wanxiang Group), both which were en vogue during the VC boom to green tech several years ago. LivingSocial, the daily deals company which just went through another huge round of layoffs today and is viewed by many as walking dead also makes it on the list. Square which continues to raise gargantuan amounts of money including recently from Singapore sovereign wealth funds has also had its share of issues and does still seem to be trying to figure out what it wants to be when it grows up.  Box has also delayed its IPO blaming market conditions.

It’s a stark reminder that as exciting as some of these deals and opportunities may be (founder Rony Abovitz called Magic Leap ‘so badass you can’t believe it’), lots of funding doesn’t always mean success. 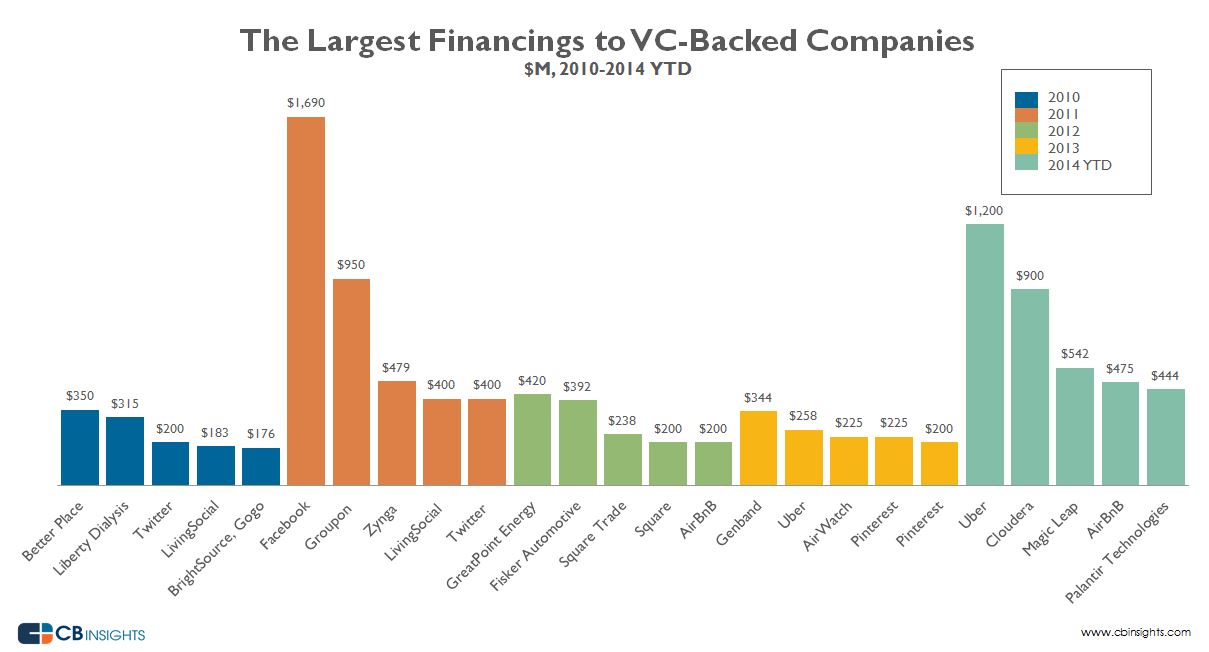 Looking for more data on the biggest VC-backed deals? Check out the CB Insights Venture Capital Database. Sign up free below.