Research Brief
2701
The massive price tags paid for AppDynamics this week and Stemcentrx last year ranked them in the all-time top 10 for M&A deals among VC-backed companies.

Just one week ahead of AppDynamics‘ scheduled IPO, Cisco surprised the industry with a blockbuster acquisition of the app monitoring company, which it bought for a whopping $3.7B. This follows a string of large M&A deals, including Jet.com selling to Walmart for $3.3B in August 2016.

But perhaps most notable was an earlier deal in April 2016, when cancer therapeutics startup Stemcentrx was acquired for $10.2B by pharmaceutical giant AbbVie in one of the largest-ever M&A exits of a VC-backed private company. (Around that time, we’d been highlighting Stemcentrx in our research on funding to cancer startups and how hedge funds and investment banks were leaping into private healthcare investing.)

How do these recent mega-deals rank historically? Using CB Insights data, we took a historical look at the largest mergers and acquisitions of VC-backed companies to find out.

In first place for largest VC-backed M&A remains WhatsApp‘s record-breaking acquisition by Facebook, which settled at $22B when the deal was completed in 2014.

Second-largest was the just-mentioned cancer-drug maker Stemcentrx, with its $10.2B deal.

And in third was biotech company Acerta Pharma, which sold a majority stake to AstraZeneca at a $7.3B valuation. The recent AppDynamics deal ranks as the eighth largest. 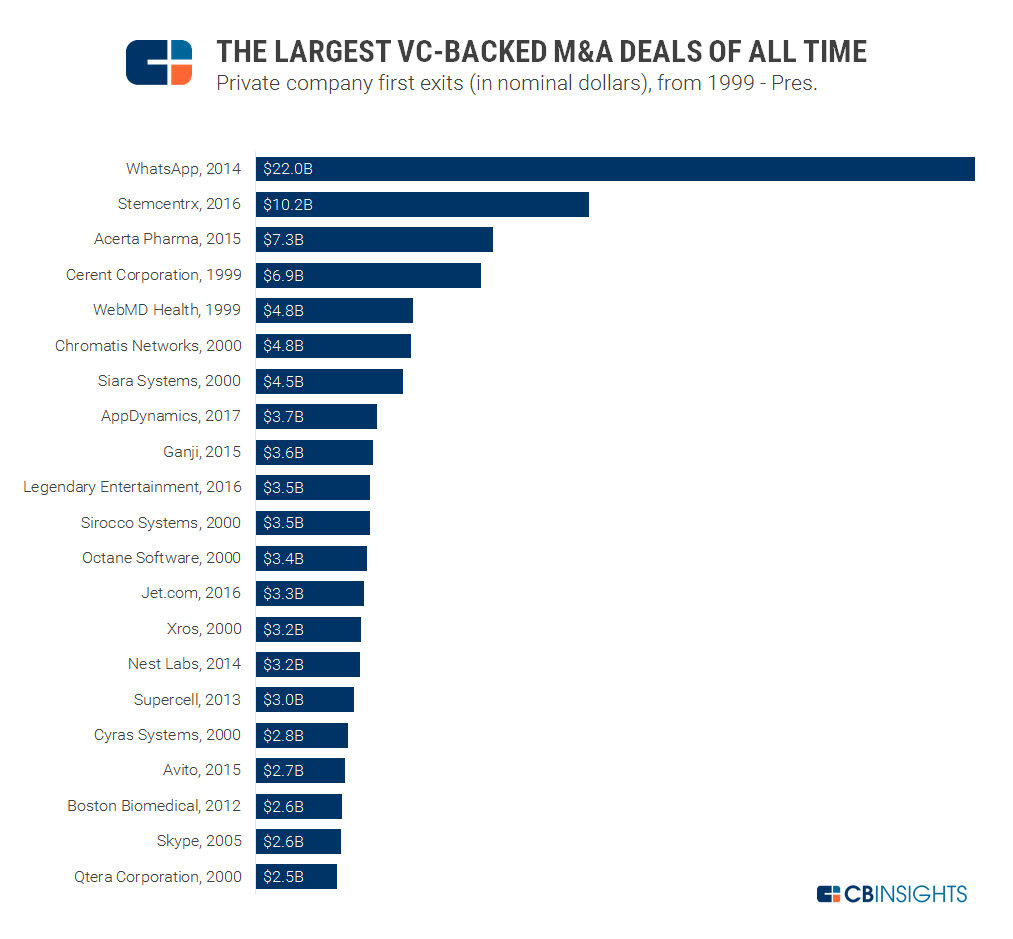 (Note: Only first exits of private companies were included. Acquisition by financial entities such as private equity funds were omitted. Dollars are in nominal terms.)

Taking a look at the sectors that produced the largest M&A by dollar value, the most well-represented in the top 20 was the internet sector, which had 7 companies in the top 21 (including the AppDynamics deal). Next most represented was the mobile & telecommunications sector, followed by healthcare (which had three companies ranked).

See the full table below (click on the companies for profiles on each):

Want more data on startup M&A? Sign up for our venture capital database or sign in below.