Among bulge bracket banks, JPMorgan is making a bigger push into payments technology as digital banking becomes a strategic priority.

Last year, JPMorgan CEO Jamie Dimon made headlines for calling bitcoin “a fraud.” But the performance of his bank, the largest by assets in the US, received less hoopla.

Spurred by revenue growth in its consumer banking and asset management units and favorable economic and regulatory tailwinds for the banking industry including rising interest rates and momentum behind President Trump’s tax plan, JPMorgan added over $60B to its market cap in 2017. This was the second highest increase among bulge bracket banks over the 12-month period. 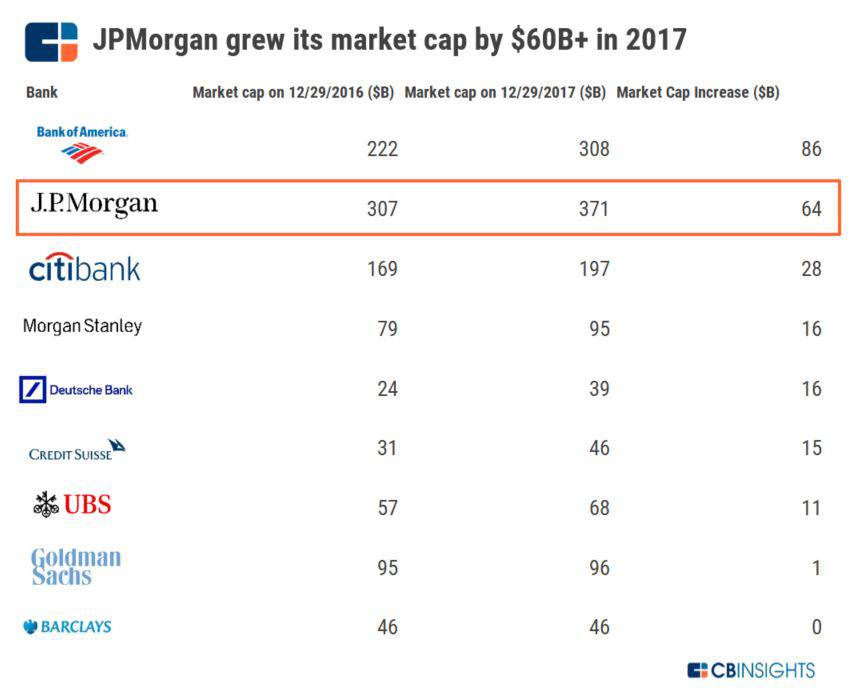 Moreover, JPMorgan has pushed forward on its digital capabilities.

In 2016, the bank spent $9.5B on technology and Dimon has committed $300M alone to improve JPMorgan’s technology for its asset management products. Relative to its peer group, JPM claims the highest number of mobile banking customers and its Chase Mobile app currently sports a 4.7 (out of 5) rating in the App Store.

In this analysis, we look into JPMorgan’s investments, M&A, patents, hiring, and earnings calls to understand how the bank is strategically positioning itself against bulge bracket peers.

Specifically, we compare JPM to:

While mentions of “technology” and “digital” on bulge bracket bank earnings calls have jumped in 2017, the theme has been less prominent for JPM vs. a handful of its peers.

Of JP Morgan’s peers, Bank of America, Morgan Stanley, and Barclays have all discussed technology and digitization substantially more in their earnings calls in 2017 than in years past.

Here are some findings from what the three discussed on earnings calls in 2017: 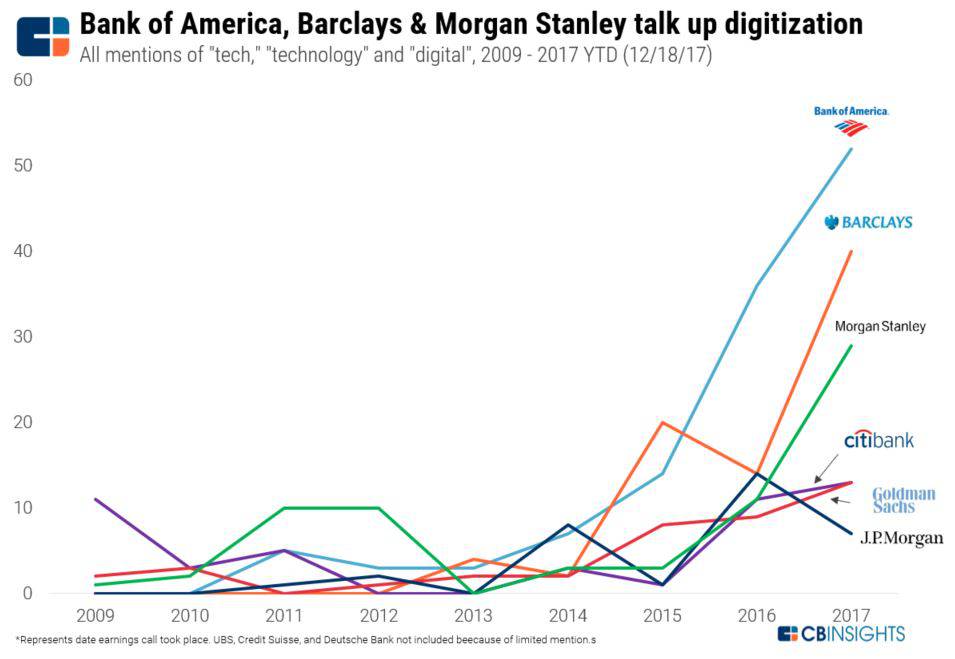 While JPM has not been as vocal about tech in earnings calls as some of its peers, its private market activity indicate fintech is a priority for the firm. Among bulge bracket banks, JPM ranks third for total fintech investments since 2013.

JPMorgan’s recent fintech investments have focused on payments and infrastructure-type companies. These companies have in some cases also formed strategic partnerships with the bank. These include:

Based on the data, JPMorgan ranks ahead of most bulge bracket banks when it comes to overall fintech investment since 2013, but behind its peers Goldman Sachs and Citi. While Citi maintains a strategic corporate venture capital arm, Citi Ventures, the CVC has looked beyond fintech for investment including in areas such as security, marketing, and e-commerce. 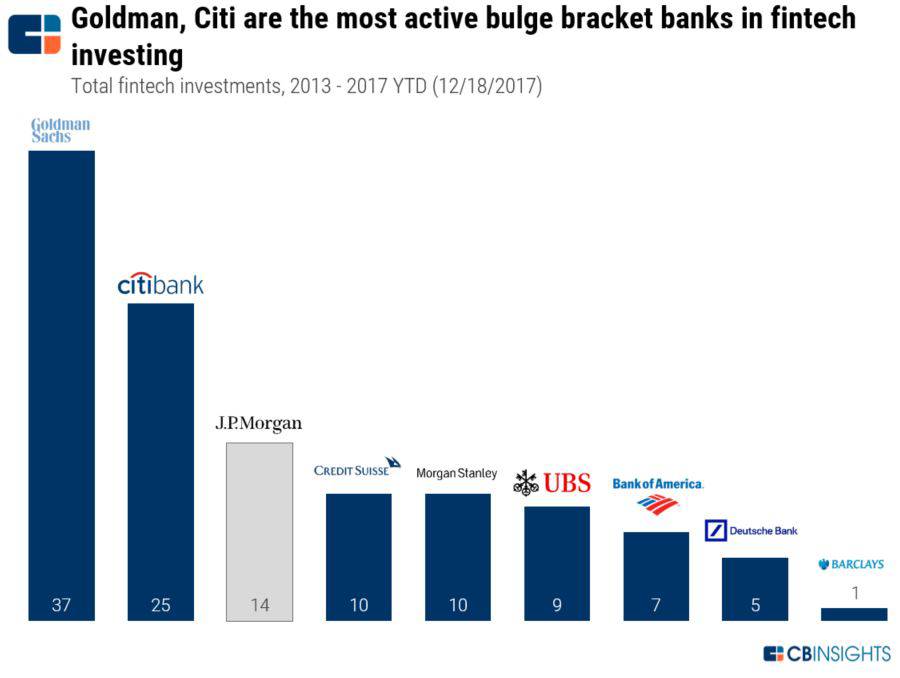 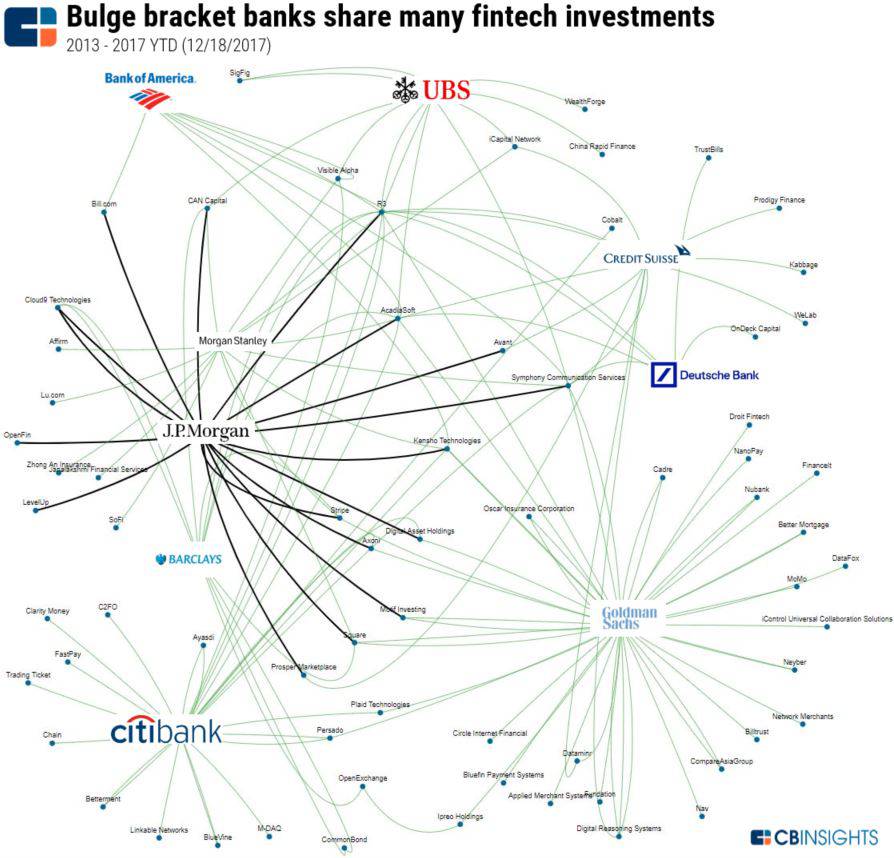 “Labor is a big part of our cost. So are the tools themselves. We are constantly, and I mean constantly, scanning [the market] for the latest, best tools. This is critical because adversaries are always trying to find new ways to cause havoc, harm, and destruction at large companies.”

JPM has invested in fewer cybersecurity companies than its peers Goldman Sachs and Citi, but it’s worth noting the bank’s uptick in strategic activity as of late. Two of JPM’s last two deals went to cybersecurity startups that won the JPMorgan Chase Hall of Innovation awards, which is given to companies “honored for their achievements in innovation, disruptive technology, and business value to JPMorgan Chase” (meaning they were already working with the bank).

These investments include Menlo Security (in December 2017), which aims to eliminate phishing and malware by isolating risk, as well as Reversing Labs (in November 2017), which provides cyberthreat detection and mitigation products.

Here’s a look at how the bank’s cybersecurity investments compare to the rest of the bulge bracket: 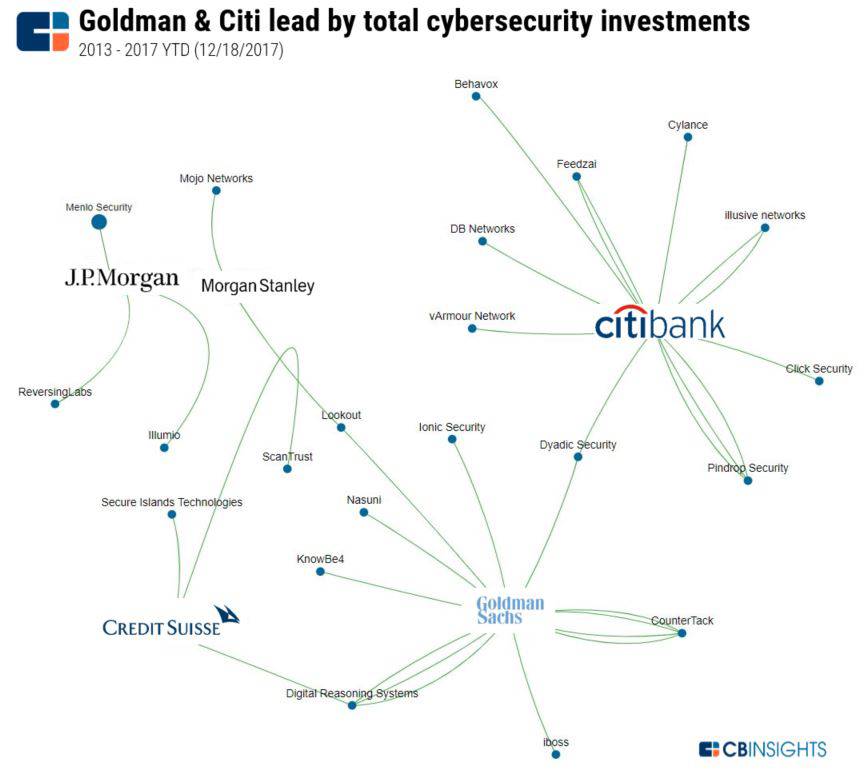