Research Brief
1759
JP Morgan's Jamie Dimon has warned that Silicon Valley is coming. His firm is meeting the challenge head-on investing in many Fin Tech startups in areas ranging from lending tech to robo-advisors.

While Dimon’s letter implied future partnerships with emerging Fin Tech startups, the reality is that JPMorgan has already made a number of investment partnerships to date. So using CB Insights Business Social Graph, we analyzed where JPMorgan was looking in the FinTech space (as well as the areas it has avoided).

Fin Tech startups are not attacking all of JP Morgan Chase head on, of course, but rather the individual products and services of big banks e.g. small business loans, wealth management, etc. The graphic below visualizes how real the threat to traditional banks are from a number of emerging specialist startups looking to ‘unbundle’ them. 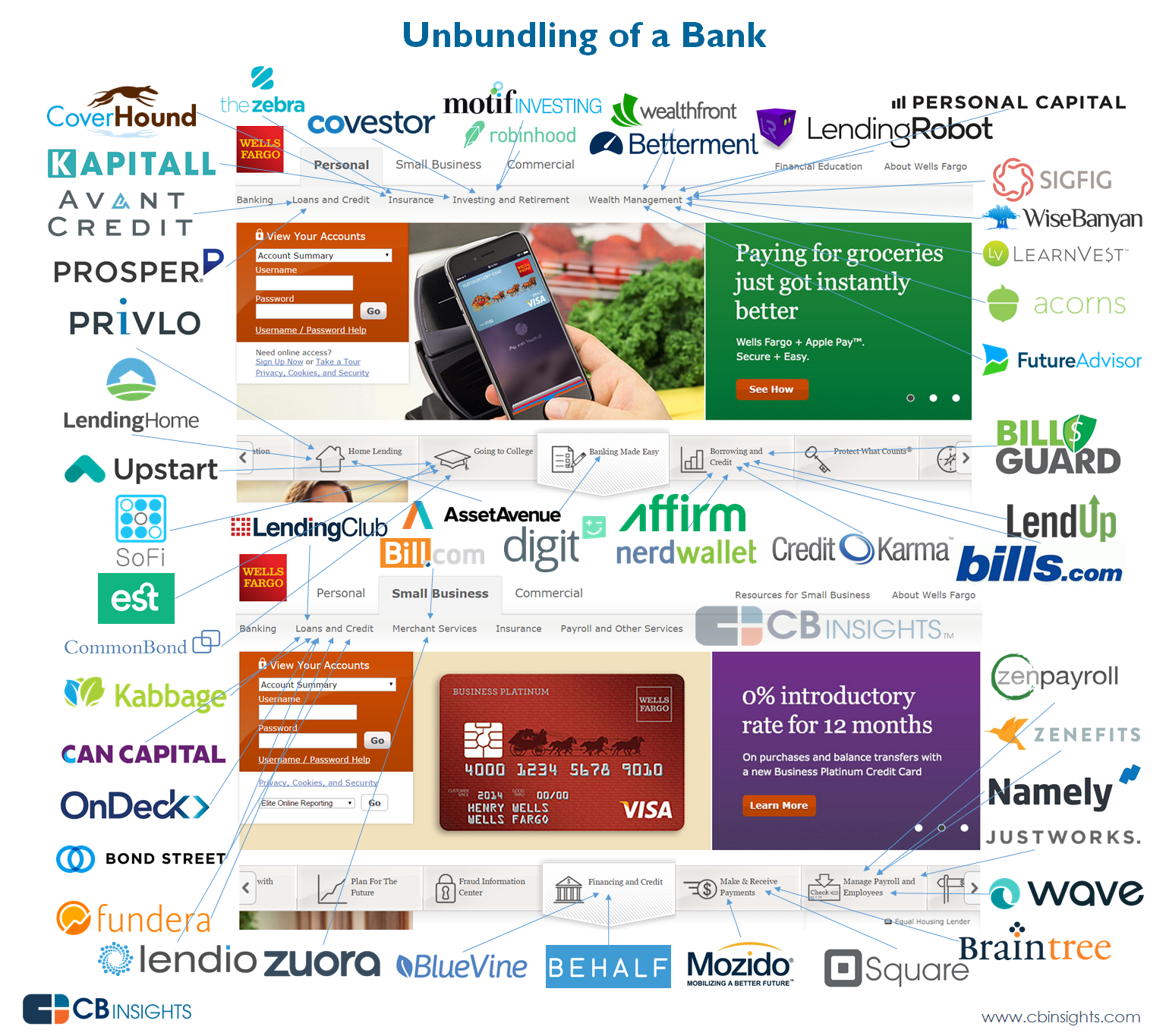 When we look at JPM’s investments across all sectors, they have been diverse – ranging from eCommerce firms such as Zalora to co-working space WeWork to consumer AI racing game Anki. It’s worth noting that JPM is investing in some startups as a financial investor primarily and some which are more strategic to their core business. The Business Social Graph below highlights the investments and credit facilities JPMorgan has made since 2009. 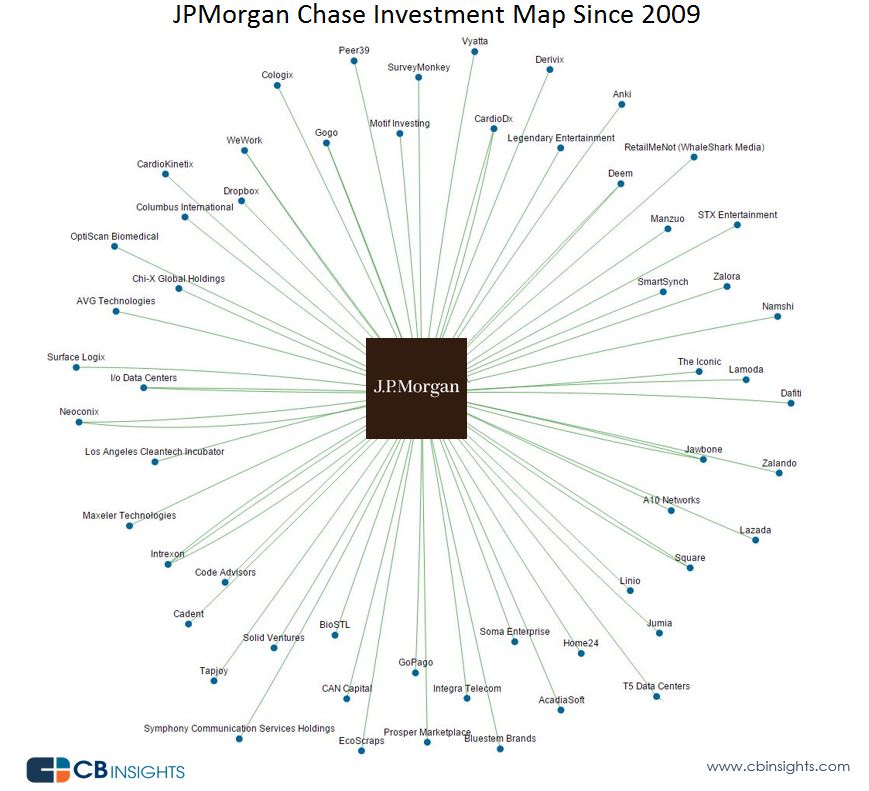 But when we isolate for JPM’s FinTech moves, a few names stand out. Specifically, JPM invested in online broker Motif Investing‘s $35M Series D and mobile payments unicorn Square‘s Series B back in 2011. The efficiency of lending upstarts was mentioned by Dimon in his letter, and JPM has made a couple moves in the area. Most recently, JPM participated in a $165M growth round to Prosper, valuing the P2P lending marketplace at $1.9B, and a $650M credit facility to SMB loan company CAN Capital.

One area where JPMorgan has been noticeably absent on the investment front is digital currency/bitcoin or the blockchain. While bitcoin funding has risen to record highs, JPM has not made an investment in the space, which Dimon has publicly called ‘a terrible store of value.’ The visualization below highlights JPM’s Fin Tech moves and the investment themes they do or don’t fall into. 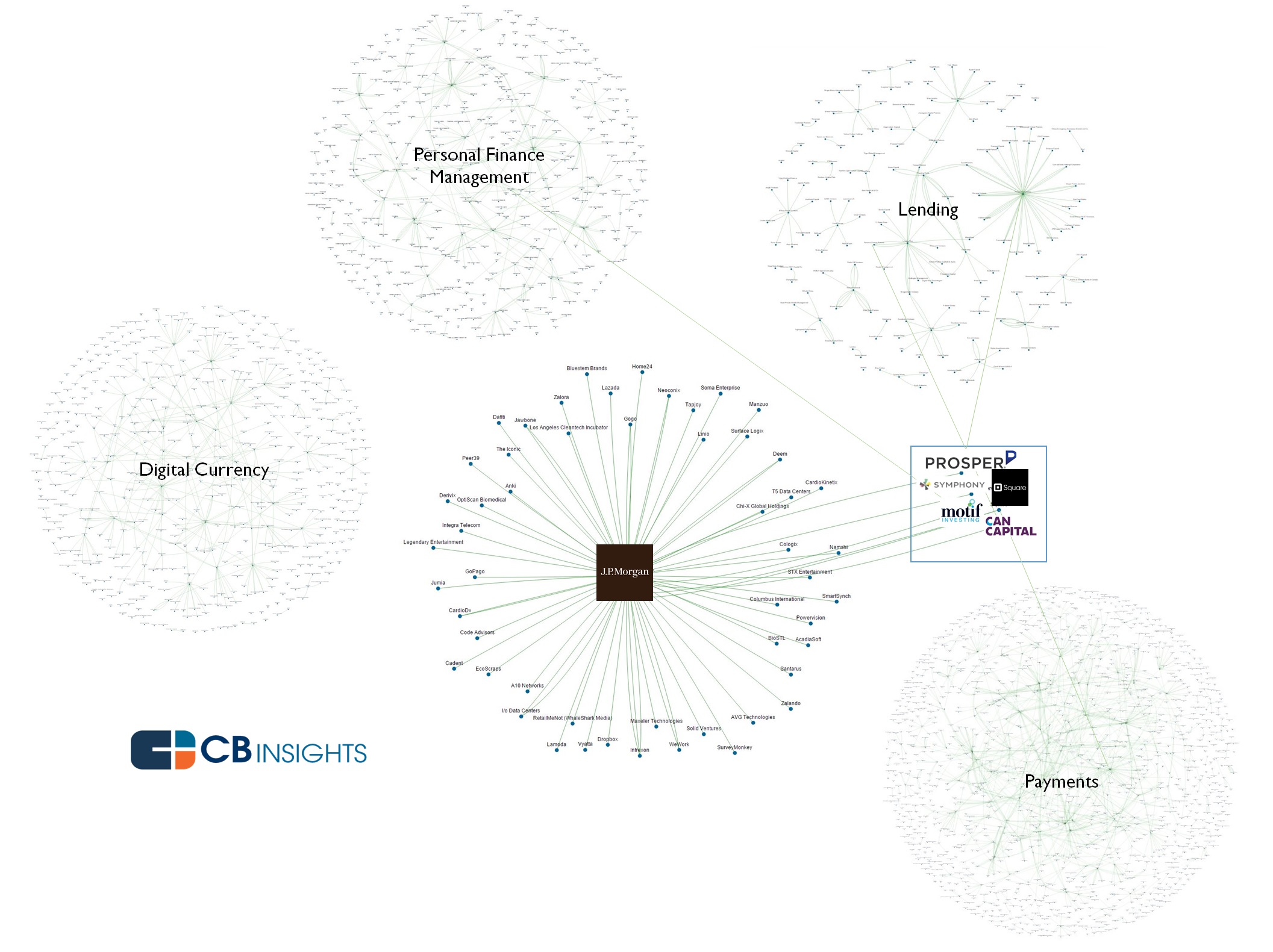 The Periodic Table of Fin Tech

Want to track Fin Tech investment and exit data? Sign up for the CB Insights Venture Capital Database free below.