Last year, we published a research brief showing that Israel was a high-performing market for venture-backed company exits in 2013, including the exits of Wix and Intucell, both backed by US-based Bessemer Venture Partners.

As momentum increases in the “startup nation,” we used CB Insights data to analyze trends in Israel’s VC-backed exits in 2014 and 2015 year-to-date. This brief includes annual exits data, sector breakdowns, and top exits.

This year has already surpassed 2014 for venture-backed exits for Israel-based companies, at 23 year-to-date. Last year had already seen healthy year-over-year (YoY) growth with 69% growth in exits. 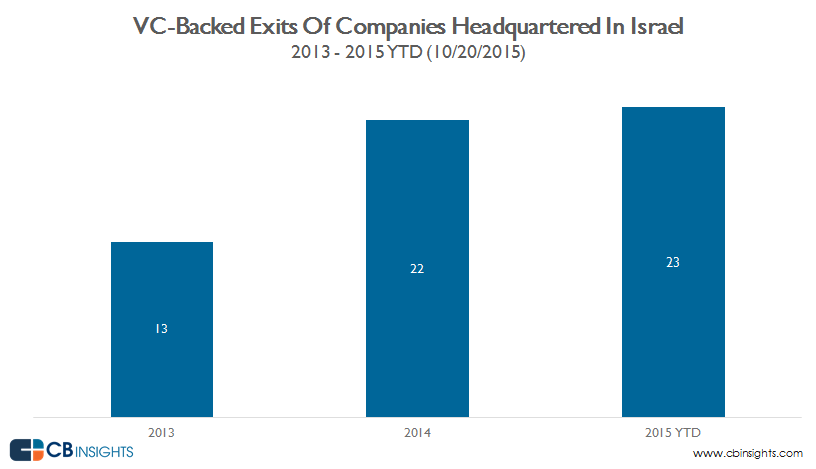 Israeli exits in 2015 year-to-date (YTD) have come from a variety of sectors, with mobile and telecom, internet, and healthcare being the top three sectors for exits, in that order. 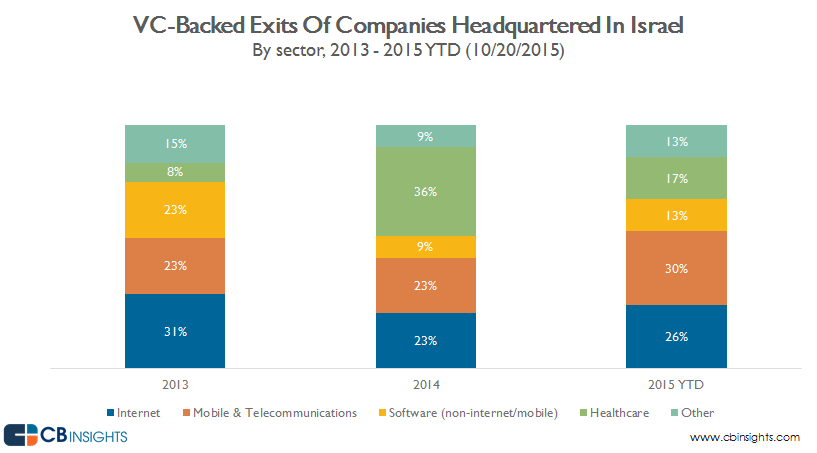 Below are the 5 largest venture-backed exits of Israel-headquartered companies since 2013. Topping the list is Jerusalem-based Mobileye which develops driver-assistance technology, and counts GM, Honda, and BMW as some of its customers. Bessemer Venture Partners is an active venture capital firm in Israel, and was an investor in 2 of the top 5 exits as seen below.

Note: The list below doesn’t include exits of originally Israeli companies that relocated to the United States, including Waze (acquired by Google in June 2013 for $966M) and Trusteer, which IBM bought in August 2013 at a $900M valuation.

Want more data on Israel? Login to CB Insights or sign up for free below.