In April 2016, smart sensor startup Helium‘s $20M Series B was led by prolific corporate venture arm GV. But it was the participation of another corporate venture (Munich Re/HSB Ventures) that perhaps better signaled where the broader opportunity for Helium’s sensor technology lies. As Helium president Rob Chandhok told Fast Company:

“If you’re a restaurant insurer, and you have to pay off a quarter-million dollar claim because someone left the refrigerator open overnight, you’d want some way to detect that as soon as it as possible, so that claim can be avoided. In the insurance industry, loss prevention is the name of the game.”

Helium isn’t the first Internet of Things startup to receive direct investment from an insurer or its strategic venture arm.

Using CB Insights data, we highlighted the range of insurance investors including AXA Strategic Ventures, AIG, and American Family Ventures who have been deploying investments to IoT startups across auto, home, industrial, and other segments. Four separate insurance investors have made three or more investments across the IoT space to date already: AXA, AmFam, USAA, and MunichRe/HSB (the corporate strategic venture arm of Munich Re Group and the Hartford Steam Boiler Insurance Company).

Some have gone on to raise significant follow-on investment. In March, smart doorbell Ring raised $61.2M in a Series C led by Kleiner Perkins.

Of course, the IoT-insurance ecosystem has also seen notable growth by way of strategic partnerships including those between State Farm and Canary, and Liberty Mutual and Nest, among others. 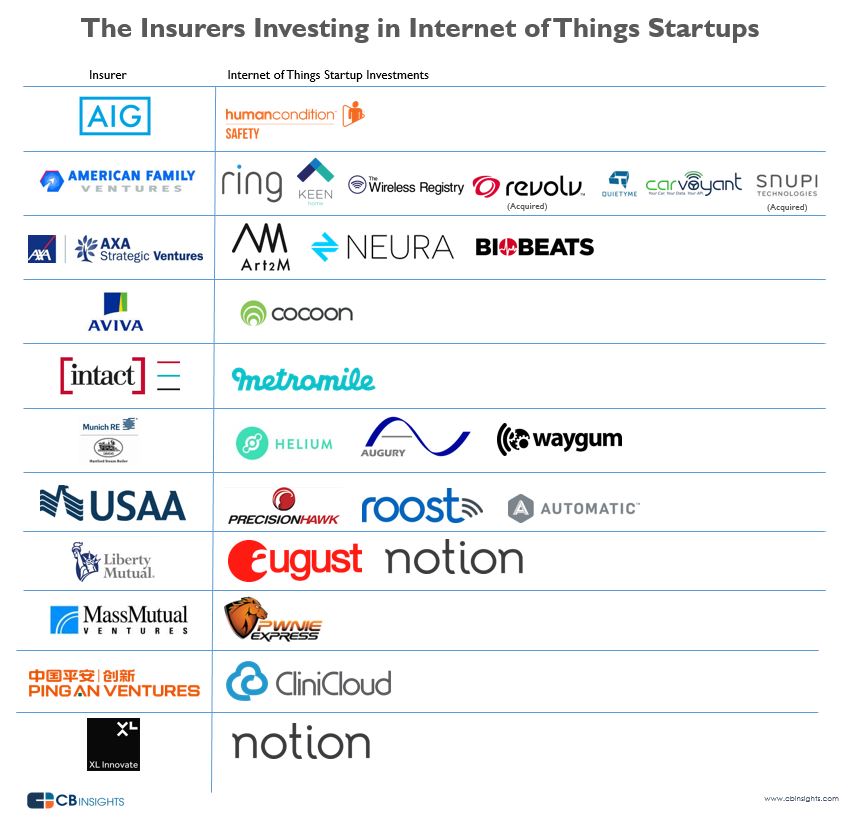 Looking for more insurance tech data and analysis? Sign up for the Insurance Tech Insights newsletter.