Research Brief
2510
We break down Internet of Things (IoT) investment by subindustry to show where deals have gone. Manufacturing is one area that's still relatively light on deals.

IoT startups have has seen tremendous investment growth over the past five years, especially those working on industrial IoT applications, which saw 83% funding growth in 2015. What are the specific categories that have been most targeted by IoT investments, and where are deals more thin on the ground?

Using CB Insights data, we drilled down and examined deals to private IoT companies broken down by our subindustry categories to highlight more saturated areas vs. growth opportunities within IoT. The resulting heat map shows deal activity by CB Insights’ subindustry classifications. (Note: only subindustries with at least 10 equity financings since 2011 were considered, since these are likely areas where IoT tech has shown some traction, and are more likely to be relevant in the near future.)

Not surprisingly, with solid green across the past 5 years, sectors like “Health & Wellness” and “Business Intelligence” saw consistently high deal volume going to IoT startups. Activity in Health & Wellness was mostly driven by consumer wearables companies like WiThings and Misfit Wearables (“Patient Monitoring” was another health-related category with relatively high deals). Meanwhile, Business Intelligence was comprised of enterprise data platforms like WebAction, Umbel, and TempoIQ.

However, consumer wearables’ attractiveness as an IoT category may already be waning, as deals to Health & Wellness went from 25 in 2014 to just 19 in 2015.

Spotlighted by the category’s lone green square in 2015, the largest uptick in deal count last year went to “Robotics”, a subindustry that encompasses many startups focused on drones and warehouse automation systems. This booming subindustry went from $66.5M of funding across 7 deals in 2014, to $259.5M across 19 deals this past year. Last year’s deals included those to drone makers DJI Innovations and 3D Robotics, along with warehouse robot systems like GreyOrange Robotics and Rethink Robotics.

Slowly ramping up over the past few years was “Supply Chain & Logistics,” an area mostly made up of startups focused on connected fleet tech. 2015 deals in this category included rounds to Telogis, Peleton Technology, and Greenroad Technologies.

One notable relatively unexploited subindustry is “Manufacturing, Warehousing & Industrial,” an area of promise within the industrial IoT (IIoT) area mentioned earlier in this post. Startups such as Sight Machine and Eigen Innovations that are focused on harnessing IoT tech in manufacturing contexts have only seen 10 deals. Also, “Conferencing”, “Wireless & Telecom”, and “Lighting” were subindustries that saw relatively low deal volume.

See the full graphic below: 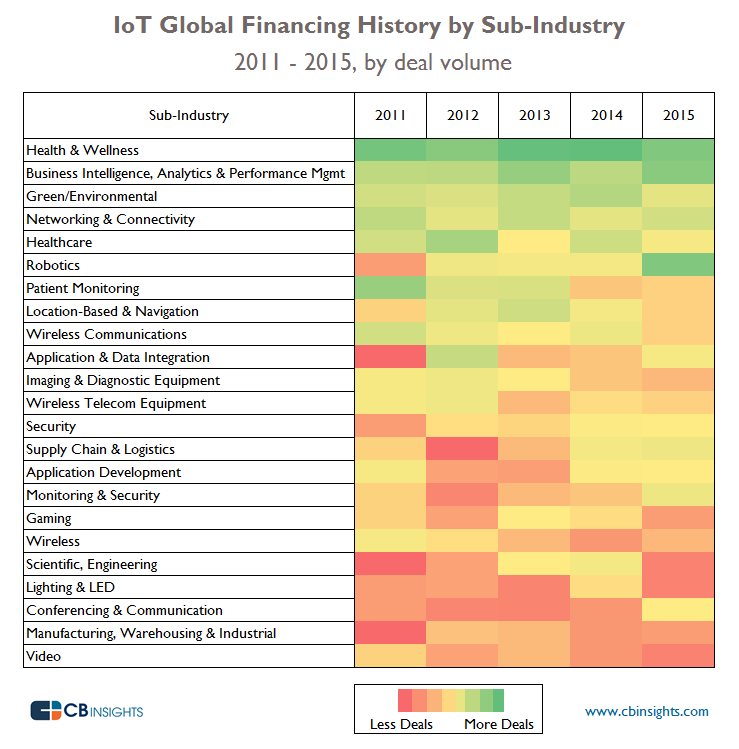 Want more data about top IoT companies? Login to CB Insights or sign up for free below.