Annie Lamont and Andrew Adams of Oak HC/FT have been investing in digital health since the 2000s and spun out Oak HC/FT to invest more directly in the space. We talked about trends they're seeing.

After a history of investing across different sectors at Oak Investment Partners, in 2014, Oak HC/FT raised their first dedicated fund separate from Oak Investment Partners to focus specifically on investments in the healthcare and fintech spaces. They’ve been consistently active since then, with recent bets in Trov, Urjanet, and Axial Healthcare among others as seen below in this snapshot from their CBI profile. 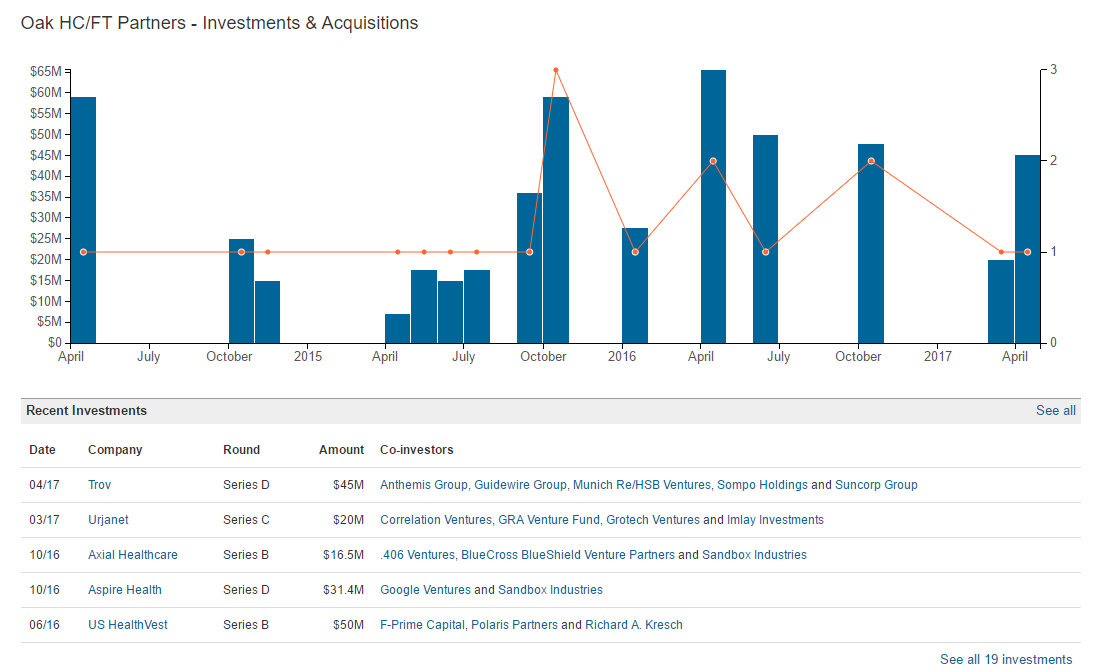 We sat down with Managing Partner Annie Lamont and General Partner Andrew Adams about trends in digital health.

*Transcript has been slightly edited for clarity

Could you tell me a little bit about Oak HC/FT’s investment thesis in digital health and how that’s changed over time?

Annie Lamont: Our digital health strategy really started in 2000, and in 2000 we looked at the internet, where the rules were going, what the issues were, the system – and we said we’re solely going to be about lowering costs and improving quality and this technology-enabled services strategy began, with our first investment being Athenahealth. For 17 years we lived that mantra with HealthDialog for disease management, ihealth (now Cotiviti) which is now the handshake with athenahealth for the payers, BenefitFocus, Castlight and then a whole host of companies in this fund like Quartet Health and Aspire.

Andrew Adams: I think we are opportunity driven, so we’re do anything from a startup, to a growth business, to a consolidation play. It’s really about the size of the opportunity, clearly the quality of the team, but especially those guiding lights of cost, quality, and consumer experience for us.

What’s an area of digital health that’s particularly interesting to you right now?

Annie Lamont: There are so many interesting areas. The integration of behavioral health with primary care we think is incredibly important and Quartet is the flagship company in that area and has been successful in selling to health plans and one major health system. What we like about that model is that they’re selling a service that’s lowering total cost of care for a health plan, so that’s why the customer [the health plan] cares. But they’re providing software that’s connecting the primary care doc with the behavioral health system – and that could be with a CBT program, with a telepsych visit; it could be with a primary care doc that through data we know is good at treating depression. It’s also just simply the closed loop system. The primary care doc may not have identified an individual’s needs, but we can using the health plan data to tell the doctor. They screen the patient, then direct them through the system to the right resource. Then they know an appointment has been made and they get reports from the behavioral health professional, closing the loop. Primary care is coordinated care, and nothing is more important to coordinated care than a good experience and outcome.

And an area you think is over heated?

Andrew Adams: I would say the employer-facing segment is one where there’s been a lot of investment activity. It’s really forced us to continue targeting the platforms that can scale to large companies as opposed to point solutions. Because there’s been so much investment, the large enterprises and large employers have been overwhelmed. I think what this will cause is consolidation at a high level, but also a need for these point solutions to plug into these platforms to gain scale.

Are there any common pitfalls you see digital health entrepreneurs fall into?

Annie Lamont: Well there are so many! The first question we ask is “who’s paying and why?” and it’s amazing how often people haven’t really thought that through. The consumer is not paying except for a rare case  — 23andMe is probably the only major successful company there, maybe Headspace. So knowing who’s paying is incredibly important. And when it comes to a point solution or creating apps, it’s very hard for a provider system to deal with lots of little vendors.

Andrew Adams: I would add to remember it’s a regulated market. That’s something that has to be respected and appreciated as the businesses scale.

Annie Lamont: The Uber/Silicon Valley view that you ask for forgiveness and not permission, not going to fly.

You recently saw the exit of Core Informatics to Thermofisher. Exits in the digital health space have been lagging, but are you starting to see more corporate M&A interest? Do you think the exit environment for digital health companies is going to change in the near future?

Andrew Adams: The vast majority of our exits are strategic M&A, and typically these companies are looking for a capability that they can’t develop in-house or they’re looking to open up a new growth channel and in many cases they’re looking for a team to drive and build the more innovative aspects of their business. We think this trend is going to continue, particularly because a lot of these corporations have a lot of cash and they have to adjust their business models – whether it’s adjusting to a new regulatory environment  or a new market opportunity, an M&A strategy is one that can help solve a lot of those issues very quickly.

Right now there’s a lot of regulatory uncertainty in the healthcare space. Is this something you think startups need to be worried about?

Annie Lamont: So Trump was elected the night before our annual meeting, and we definitely got the question “how many slides did you need to change?” And the answer is not one. The reality is if you’re selling services to the government, health plans, providers, etc. and you’re about lowering cost and increasing quality then it works across the board. We generally do not invest in “stroke of the pen” risk companies – we’re not invested in Oscar or an exchange, it’s one of the things we don’t do. We believe in our mission of lower cost and improving quality and that not only keeps you safe in a regulatory environment but it’s the right thing to do from a business perspective.

Andrew Adams: One the areas heavily debated right now is Medicaid. Regardless of what happens – whether expansion continues or we move to a block grant system – states are going to have to do more with what they have or less. That’s a very high cost population, and the only way to relieve some of that pressure is through technology and specialized services. Long-term that’s a regulated area that’s going to have to adapt and think differently about how they take care of these patients

Annie Lamont: Honestly there should be no fee-for-service Medicaid or Medicare. It should all be Medicare Advantage (MA), it should all be Managed Medicaid. Getting back to this coordination of care, everyone should have a primary care focal point. It should be capitated care, and when we think about the innovations we’re doing at Aspire and Quartet and other companies, they’re selling mostly to MA plans. MA [plans] have an average life of 7.5 years they’re working with a patient and they’re highly incented to manage the cost of care and that’s where the innovation is happening.

There’s been a lot of hype around AI in healthcare recently, despite the fact that healthcare has typically been slow to adopt new technologies. What do you think is driving this activity, and are there areas in healthcare you think AI will work better than others?

Annie Lamont: It’s interesting because when you talk about AI, people usually think about replacing the clinician, for example Watson talks about the clinical benefits. I actually think that’s going to be the last place it’s used effectively. For one, you’re going to have massive resistance from physicians. They’re powerful and still rule the roost in the hospital. So I think they’ll be resistant to AI, even as a helper since they think they know best.

We’re using machine learning and algorithms at Aspire to learn which patients we should go after, who actually is at risk of passing away in the next 12-18 months. In call centers, either in fintech or healthcare, using NLP and AI you can give real-time feedback to a customer or patient that’s asking a question. You’re enabling a human being by teeing up the exact answer, and eventually it moves to bots. The whole benefits equation could be bots. This is rules engine data, you don’t even have to be that sophisticated. Personalization and machine learning will help in bringing information about that specific individual, but 80% of the questions that are asked about your benefits will absolutely be automated.

At one of our Future of Fintech conference, Fred Wilson said taking money from corporate VCs is “doing a deal with a devil.” Do you think that applies in healthcare as well? Are certain types of corporates more interested in digital health than others?

Annie Lamont: We’ve actually had great luck with corporates. It’s been mostly health plans that have invested alongside us. There have been no special rights around the company and it’s often been multiple health plans so it’s not as though you’re selling out to one group. I also think it’s reinforced the relationship as we’re building and developing these applications, it’s made them more committed. We go into it knowing we’re not building a single solution customized to that single customer. So far they’ve only been helpful.

Andrew Adams: If we ever felt we were doing a deal with the devil, then I’d be worried about the health of the company. Because that means it would be a financing of last resort as opposed to one that we think can be additive to a commercial relationship and one that we don’t think will be an inhibitor to scaling the business.

Is there a company not in your portfolio that you really admire or think is approaching digital health in a smart way?

Andrew Adams: Flatiron is doing a lot of very interesting things and it has a fantastic leader/CEO in Nat [Turner] who’s someone we admire. It’s in a category of great interest to us — oncology — and we think they’re doing smart things.

Annie Lamont: [On Flatiron not being in the portfolio, and taking money from corporates] And that was just a valuation question. Bringing two corporations in, GV and Roche, just became a matter of valuation.

What are the backgrounds of the entrepreneurs you typically fund? Are there certain traits you look for?

Annie Lamont: If you think about the world 10 years ago in healthcare, almost everyone we were backing were people who had been in the healthcare ecosystem for 10, 20, 30 years. Back then it was someone who was really an expert in a particular area.

Fast forward to today, many more young tech entrepreneurs are getting into the field. Brad Smith at Aspire had never even worked at a company in his life. He was a compelling individual with a great idea, enormous passion, intelligence, and his values and ethics were in the right place.

We were in a company called PharMEDium in the compounding space. Their lead competitor was Ameridose, and every year we were telling the FDA that they aren’t doing the right thing. They aren’t following the right procedures, they’re going to hurt somebody and they did. They had a garbage/trash pick up business before that, and they were treating this like a trash business. You’re dealing with governments paying you, and you’re dealing with people’s lives.