Research Brief
2225
This year is on track to surpass last year's record-breaking funding to Internet of Things startups.

The Internet of Things is the next major phase in computing, following on the heels of the PC and mobile eras. According to one estimate, the IoT will encompass between 20 and 30 billion connected devices by 2020.

Using CB Insights data, we examined investments in IoT startups, including deals and funding, investments by stage, most well-funded companies, and active investors. In the past six years, the IoT space has attracted a cumulative $7.4B in investment over 887 deals.

IoT startups include companies commercializing connected objects, appliances, sensors, and devices, along with supporting infrastructure and software. A few of the categories include medical devices, connected home appliances, and smart building materials. 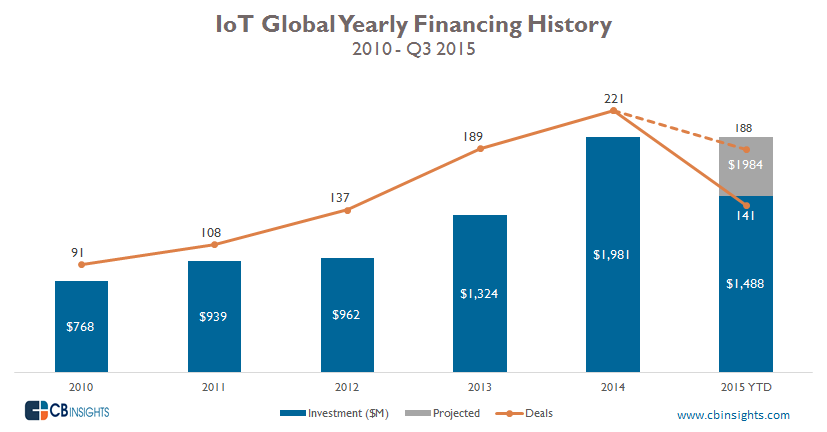 The quarterly history offers a more detailed look at the rise in IoT funding. There has been $500M in investment in private IoT companies 4 of the last 6 quarters.

Deal count has also grown substantially. In 2010 and 2011, deal count hovered around 25 in each quarter. In 2014 and 2015, the count has jumped to a range of 34 to 65 deals each quarter. The top funding quarter was Q2’15 with $626M in funding, bolstered by a $75M Series B to drone manufacturer DJI Innovations, and a $45M Series F to mixed-reality gaming company Orbotix. 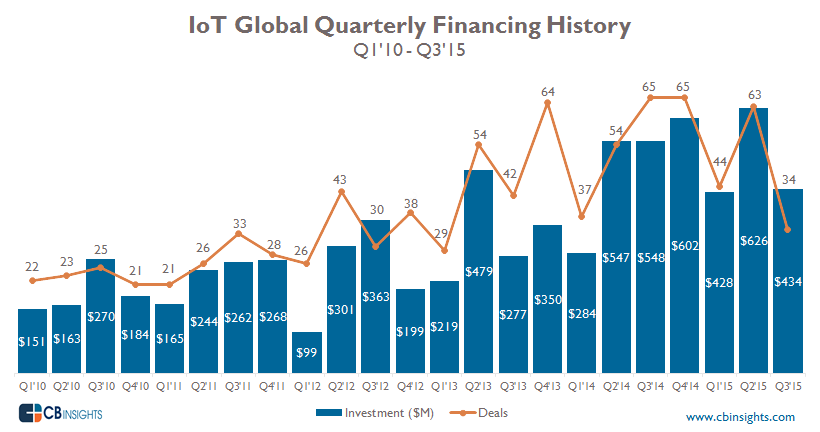 The shares of IoT deals by investment stage have held relatively constant, with a trend towards early stage deals that peaked in 2013, with Seed and Series A deals combining for 62% of deal share. That share has since retreated a bit to 53% in 2015’s first three quarters. 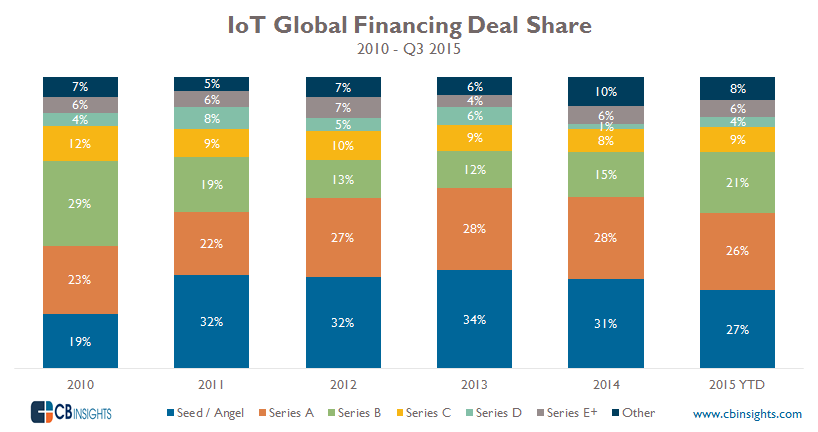 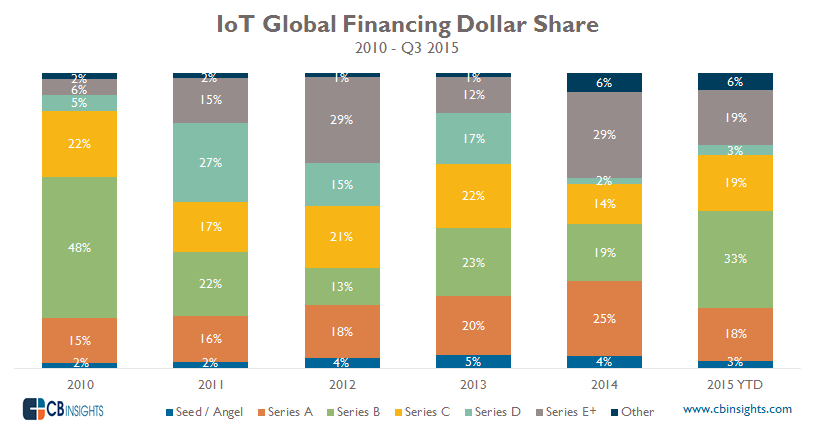 The most well-funded companies represent a diverse range of categories, including IoT infrastructure, cloud platforms, and consumer wearables.

The most well-funded company was View, maker of an internet-connected smart window and environmentally-friendly building glass. View recently raised $150M in a Q3’15 Series G round.

View was followed by Proteus Digital Health, a company that makes ingestible sensors to measure medication adherence and physiological responses. Proteus most recently raised $52M in a second Series G round in Q3’14.

The third most well-funded company was Jawbone, a wearables and smart electronics maker. The company most recently took on a $300M debt round in Q2’15.

Intel Capital tops the list as the most active investor in IoT startups, followed by Qualcomm Ventures. Both companies’ venture arms have been active investors in wearables startups, which as IoT devices are typically powered by small chips.

Next most active was Qualcomm Ventures, which recently invested in the drone company 3D Robotics, along with Whistle Labs, maker of a dog wearable. Qualcomm Ventures also invested in sensor networks developed by Panoramic Power, Placemeter, and Streetline, which all aim to harness the IoT to measure traffic and increase the efficiency in public spaces.

The third-most active investor was Foundry Group, the Boulder, Colorado-based early-stage venture fund. Foundry Group has made multiple bets on IoT-related hardware investments: Fitbit, LittleBits, and MakerBot. (Fitbit went public in June at a valuation of $4.1B, and MakerBot was acquired in Q3’13 at a $403M valuation.)

Drilling into just early-stage investments we see many familiar names on the most active investors list. Once again, Intel Capital is the leading early-stage investor, followed by Khosla Ventures, which notably invested in enterprise IoT companies including Helium and Quanttus. In third was Foundry Group, which notably invested in the Q2’15 seed round for ivee, a home voice assistant.