Research Brief
1905
For the first time, funding to international payments startups has nearly drawn even with the amount going to US-based companies. Asia in particular is heating up.

Payments startups have disrupted large financial-services corporations in the US, and are now making finance products accessible to billions in emerging markets. Funding to payments has tracked that shift, moving away from the US to pursue new opportunities overseas.

Funding To International Payments Startups Draws Even With US Investment

The trend continued in Q2’15 with a new high of $530M flowing to international payments startups, though US funding was slightly higher in the quarter at $570M.

Notable recent international deals include a $200M corporate-minority investment received by Indian startup One97 Communications in Q2’15, a $100M Series B funding round for London-based WorldRemit in Q1’15, and a Q1’15 $58M Series C funding for TransferWise, also out of London. 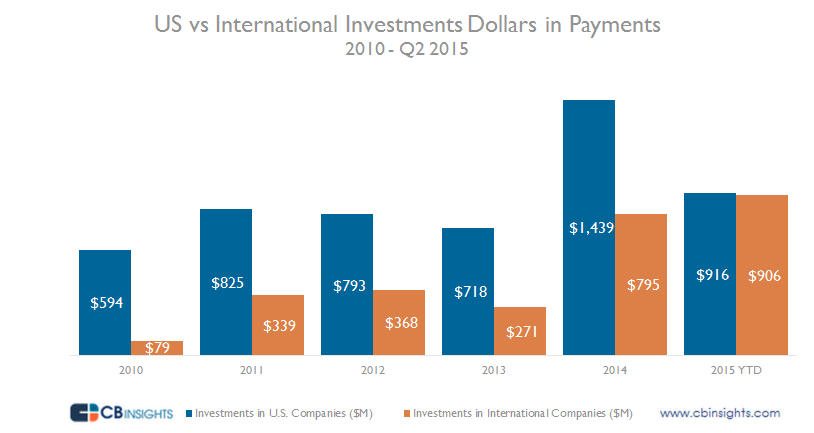 Though the U.S has been surpassed in investment dollars going to payments companies, more payments deals still happen in the U.S. than in all other countries combined. However, the deal flow-gap between the US and the rest of the world has been closing over the last 5 years. By 2014 the gap had almost closed: 87 US deals, and 61 international deals. 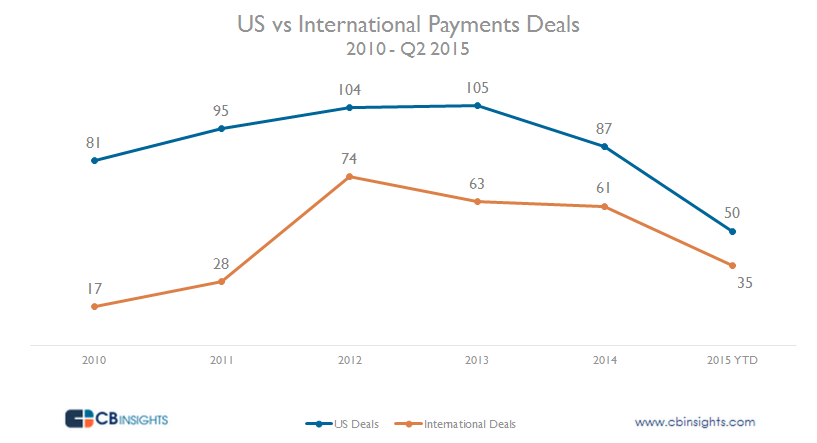 Outside of North America, the vast majority of payments deals happen in Asia and Europe. Historically, Europe has accounted for the larger proportion of these deals, led by the UK, Germany, and Sweden. However, in 2013 Asia surpassed Europe for number of deals and has maintained that lead. Countries in Asia with notably large deal flow included India, Singapore, China, and Japan. 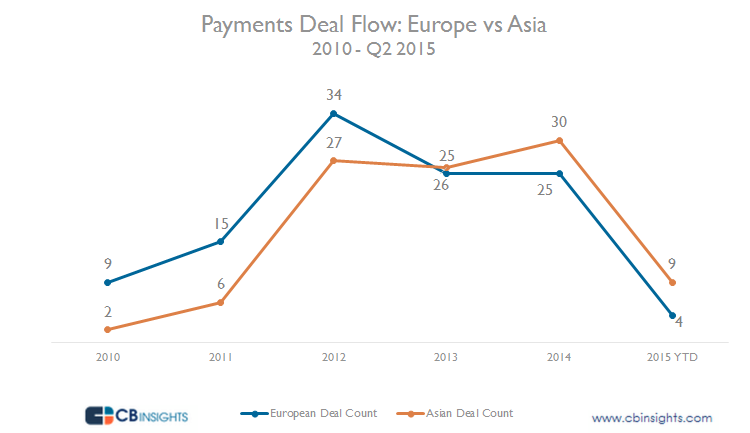 Top Countries Outside The US for Payments Deals and Dollars

At the head of our list of countries other than the US for payments deals and dollars was the UK, followed by India, and Canada. Prominent payments startups from the UK include WorldRemit and Transferwise. Top startups in Canada included Shopify, Lightspeed Retail, and SecureKey.

The most active investor in international payments startups was 500 Startups, followed by Intel Capital and Atlas Ventures. 500 Startups funded mainly seed rounds for startups in many markets, including Mexico, Argentina, Brazil, Slovenia, Japan, and the UK. Notable deals for Intel Capital abroad included a $55.5M Series C round for iZettle in Sweden during Q2’14. Atlas’ largest deal recently was its July 2014 participation in a $30M Series A round to Freshbooks in Canada.