Research Brief
1923
There have been over 55 deals to international on-demand startups so far this year. Car-hailing companies like China's Kuaidi Dache and India's Olacabs dominate funding.

Overall, international on-demand startups have raised nearly $2B already this year across 57 deals, which is less than the $3.8B+ raised by US companies on a funding basis, but significantly more than the 39 deals seen in the US this year.

See the chart below for the full trend: 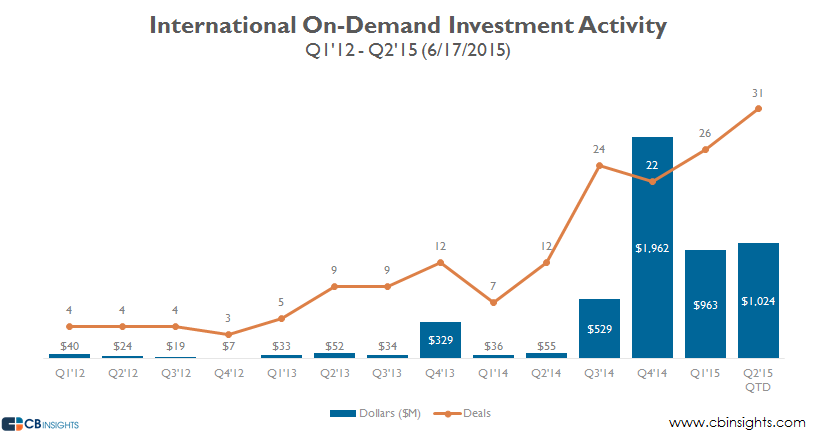 China and India dominate international on-demand financing, with 40+ deals each since 2012 and a combined $4B in equity financing raised. China’s massive amounts of funding is buoyed by deals going to a few large players, including the combined Kuaidi-DiDi Dache car-hailing entity, which has raised nearly $2.29B since 2012, across 11 rounds of financing.

India’s story is much  the same, with car-hailing app Olacabs raising a combined $810M of financing across 8 rounds since 2012.

Germany has seen the third-most activity on a deals basis, with Blacklane and MyTaxi (again, these are companies operating in the car-hailing space) accounting for 7 of the 13 deals.

Overall Asian on-demand companies have raised over $4.6B since 2012, much more than European companies which have raised just over $329M in the same time period. 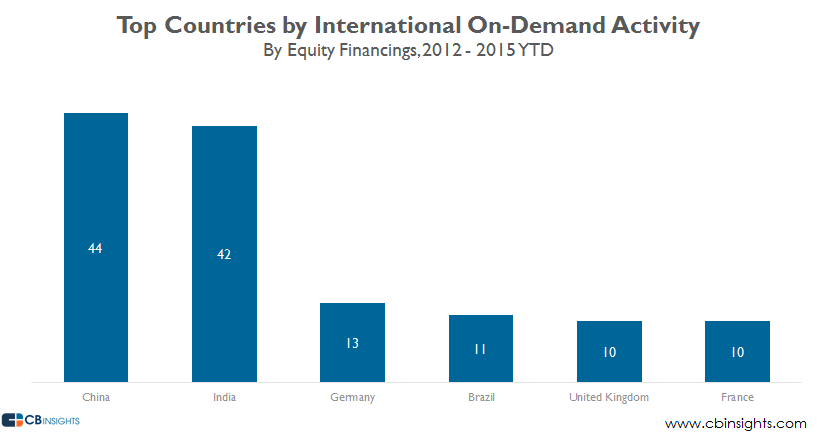 Many claim that the on-demand movement really took off with the rise of Uber. And while other use-cases have surfaced over the years, no other area in on-demand has garnered more investment than car-hailing, with 9 of the 10 most well-funded international on-demand companies being car-hailing companies. No company has raised more funding than the merged Kuaidi-DiDi Dache entity, which has raised nearly $1.5B, and is now rumored to be raising a $1.5B round to continue to battle Uber in China and the broader Asian market. India-based Olacabs is second, having raised $810M across 9 rounds of financing. Singapore-based GrabTaxi ranks third, with $340M raised. Notably, Tiger Global Management has invested in all three of these companies.

While Tiger Global has invested in the three most well-funded companies, Accel Partners leads in international on-demand investment activity since 2012, having invested in more unique companies than any other investor. Accel has made investments across multiple stages including seed investments in Swiggy and UrbanClap Technologies, as well as investing in Olacabs’ $400M Series E, which valued the company at $2.4B.

Want more international on-demand startup data? Login to CB Insights or sign up for free below.