Early-stage investments in insurance tech are moving beyond health coverage to other lines including commercial and life. Plus, other trends shaping a red-hot industry.

The excitement around technology’s potential to transform the insurance industry has grown to a fever pitch, as 2015 saw investors deploy over $2.6B to insurance tech startups globally. Using CB Insights data, we compiled six trends to look out for in 2016 in the insurance tech space.

2015 saw the launch of corporate venture arms by insurers including AXA, MunichRe/Hartford Steam Boiler, Aviva, and Transamerica. Aviva, for example, said it intends to commit nearly £20m per year over the next five years to private tech investments. Not only do we expect the current crop of corporate VCs in the insurance industry to become more active, but we also expect to see new active corporate VCs in the space as more insurance firms move from smaller-scale efforts — including innovation labs, hackathons, and accelerator partnerships — to formal venture investing arms. 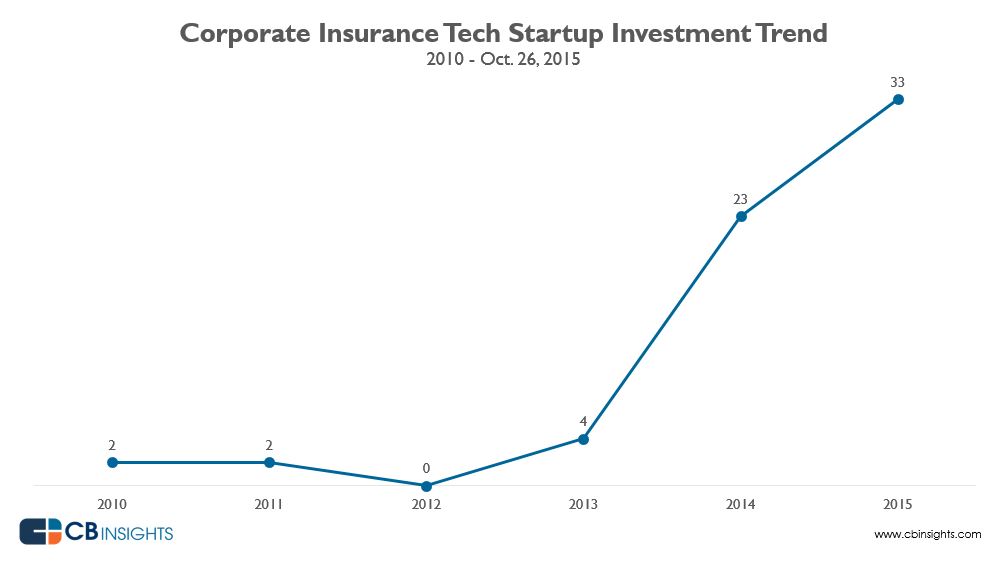 Majority of insurance tech dealflow in US moves beyond health coverage

In each of the past three years, over half of all US deal activity in the insurance tech space has gone to health insurance startups. But 2015 saw non-health insurance tech startups nearly reach parity in terms of US deal activity (49% to 51%). As early-stage investments move beyond health coverage to other lines including commercial and life, 2016 could see about-face in US deal share, with health deals in the minority. 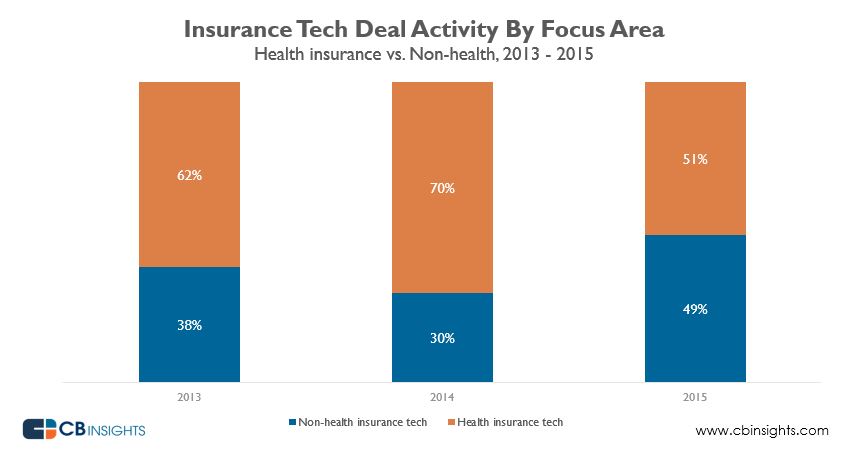 The on-demand economy has connected mobile users to services including food delivery, roadside assistance, laundry, and house calls in the click of a button. While not new, the unbundling of an insurance policy into financial protection for specific risks or just-in-time delivery of coverage or micro-duration insurance has already attracted venture investments to mobile-first startups including Sure, Trov, and Cuvva. Whether or not consumers ultimately want the engagement or interfaces these apps offer, the host of startups working in just-in-time insurance means it’s one area primed for investment growth in the insurance tech space.

Will insurers get serious about blockchain investments?

Thus far, insurance firms have largely pursued exploratory investments in blockchain and bitcoin startups. New York Life and Transamerica Ventures participated in a strategic investment to Digital Currency Group, giving them the ability to monitor the space through DCG’s own portfolio of blockchain investments. More recently, Allianz France accepted Everledger, which uses blockchain as a diamond verification registry, into its latest accelerator class. As more insurers test blockchain technologies for possible applications, it will be interesting to monitor whether more insurance firms join the growing list of financial services giants investing in blockchain startups.

Read more: The March Of Financial Services Giants Into Bitcoin And Blockchain Startups In One Chart

In an interview with Business Insider, SoFi CEO Mike Cagney said he believes there’s a lot more room for its origination platform to grow, adding that,

“We’re looking at the entire landscape of financial services, like life insurance, for example.”

A day later, an article on European neobank Number26, which is backed by Peter Thiel’s Valar Ventures, mentioned that the company would like to act as a fin tech hub integrating other financial products, including insurance, into its app. We should expect to see more existing fin tech startups in non-insurance verticals not only talk publicly but also execute strategic moves into insurance.

Knip, a Swiss-based mobile insurance app backed by US investors including QED and Route66, is currently hiring for US expansion. Meanwhile, US startups such as Trov are partnering and launching with insurers abroad. We can expect more startups in the US to look abroad both for strategic investment and partnerships, as well as insurance tech startups with traction internationally to expand to the US.

Looking for more insurance tech data and analytics? Sign up for the CB Insights Venture Capital Database free below.