The latest trends in private tech investment by insurers and reinsurers from frequency of deals to most active investors and more.

In June 2015, we highlighted the still small but growing participation of reinsurers and insurers in the corporate venturing ecosystem. Today, their private tech investment activity is on pace to hit over 75 deals in 2016 at the current pace, according to CB Insights data. That’s up from just 4 in 2013.

This research brief highlights the latest trends in private tech investment by (re)insurers — meaning both insurers and reinsurers — and their corporate venture arms including frequency of deals, where and when investments are made, participants who are most active, and more.

As the chart below highlights, (re)insurers (highlighted in the list below) have completed over 55 deals in to private tech companies in 2016 year-to-date. At the current run rate, 2016 corporate investments by (re)insurers will nearly triple the pace in 2014. 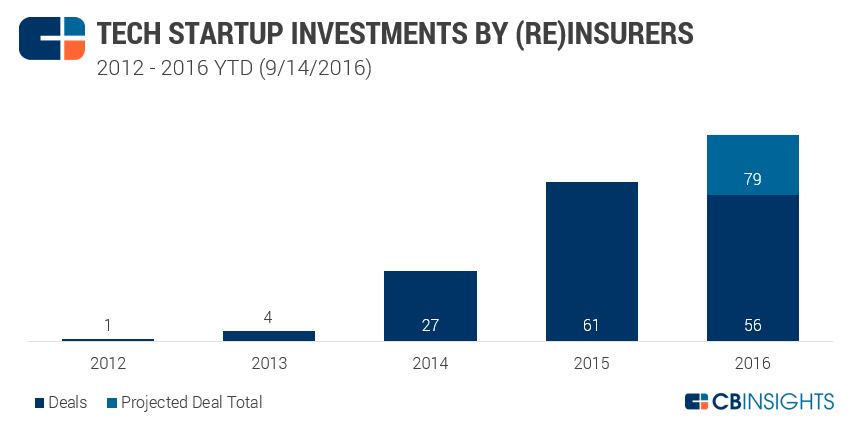 US tech startups takes over 70% of deals

Breaking down the data by geography, we see 72% of deals by (re)insurers since 2012 have gone to US-based startups. China and the UK round out the top 3 geographies for corporate investment by (re)insurers, followed by France and Germany. 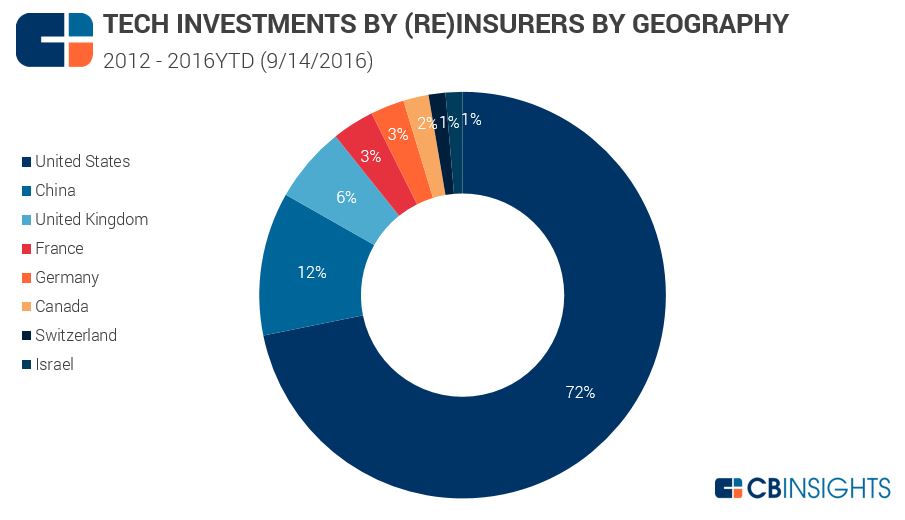 Insurance corporates active at the seed-stage

Interestingly, when it comes to backing tech startups, (re)insurance corporates have actively been investing at the seed stage. In fact, one-fourth of all tech investment activity by (re)insurers and their corporate venture arms took place at the seed-stage, while 2016 year-to-date has seen seed activity take 23% of deals. Thirty-six percent of insurance corporate investment in 2016 YTD has taken place at the Series B. 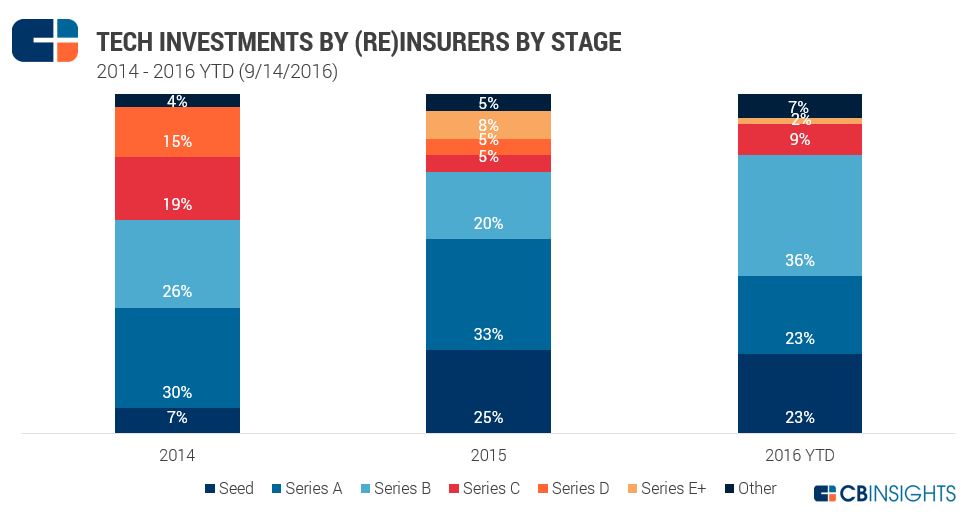 The most active (re)insurers in private tech investing

AXA Strategic Ventures, Transamerica Ventures and American Family Ventures have been the most active investors in private tech investing since the start of 2012.

Ping An Ventures has also been actively investing in the healthcare sector and so would rank higher if the table were based on investments across sectors. Most of the (re)insurers on the list below have only been publicly investing in the last two years.

The insurers investing in the Internet of Things

While (re)insurers are investing in a number of different technologies and business models, the Internet of Things has been one hot area for active corporates in the space. As we highlight below, four separate insurance investors have made three or more investments across the IoT space to date: AXA, AmFam, USAA, and MunichRe/HSB. 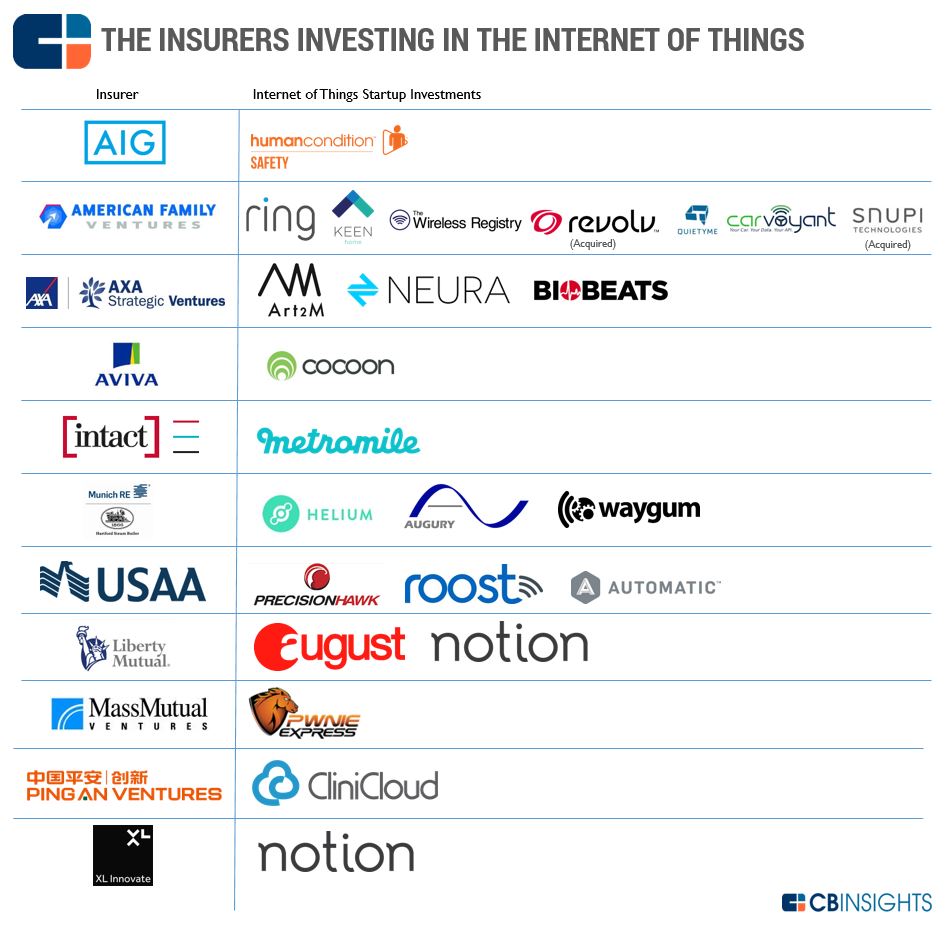 A variety of (re)insurers have also backed tech startups who are selling or are planning to eventually sell insurance. The most active firm in this realm has been XL Catlin’s venture arm, XL Innovate, which has backed startups including Lemonade, Slice Labs, and Embroker.

Of note, Munich Re, through its Digital Partners program, has partnered to provide capacity to both Trov and Slice Labs, which have each raised venture investment from separate insurers highlighting the variety of startup-(re)insurer initiatives in the insurance tech space. 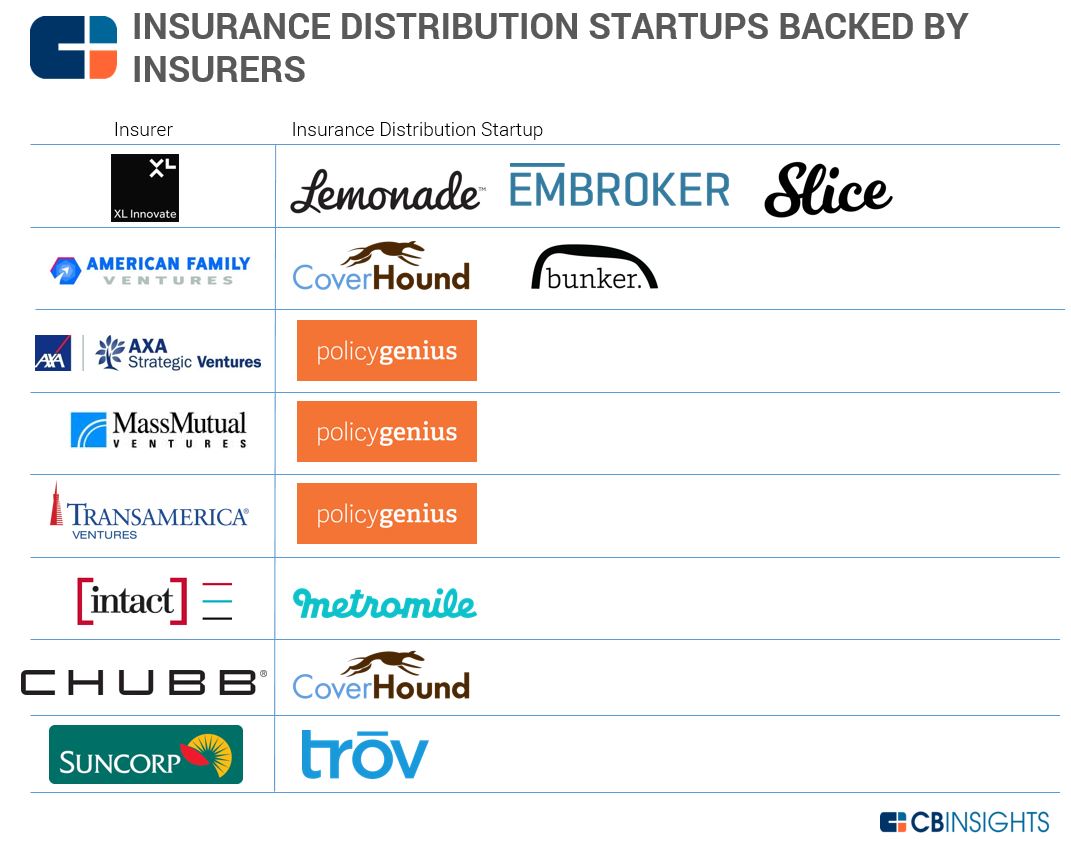 Note: This research brief primarily analyzes non-healthcare insurance corporations. A complete list of the insurance companies and their corporate VC arms used in this analysis is provided below. See a related brief on where health insurers are investing in startups.

For reference, active insurance CVCs and corporates included in this venture capital financing analysis are listed below: