Researchers and tech companies are bringing the nervous system online. These are the industries that will be transformed first.

“Brain hacking” has been a major tech topic recently, with neurotech pioneers Elon Musk of Neuralink and Bryan Johnson of Kernel‘s ambitious plans to augment human brain function with computing and artificial intelligence.

But advancements in the field have also raised major concerns among scientific experts, who worry that advancing brain-computing may worsen social inequalities and “profoundly alter” core aspects of the human experience.

Integrating the human mind with machines will create benefits, risks, and opportunities across many different areas of our lives.

We looked at the first 8 industries brain hacking (aka brain computing, brain-tech, or neurotechnology) will transform, as well as potential threats posed by this new tech:

The massive gaming industry is at the forefront of VR development. Now companies are recognizing an opportunity to blend neurotech with new gaming platforms to create hands-free “brain gaming.”

Neurable demonstrated its prototype for a brain-controlled VR video game at the Siggraph conference in August 2017. The game itself — called Awakening — casts the player as a child with telekinetic powers. To escape from a government lab, the character must use “mind power” to pick up various toys and throw them.

The game setup uses an electrode-laden headband connected to an HTC Vive virtual-reality headset: The band picks up on a class of electrical brain signals known as event-related potentials (ERP), which are incited specifically in response to commands or activities in the VR environment. The system then uses those signals to direct the course of the game.

As the video below shows, the game system is first trained to respond to the headset-wearer’s unique brain signaling as he or she thinks about each specific toy.

As the field of brain tech advances, “mind power” could be used to do much more than select and throw toys in a game environment — eventually replacing the many activities carried out today using handheld controllers.

And to get really “meta” about it, students might even be watching real-time visualizations from their very own brains.

BrainCo’s headbands measure EEG (or electroencephalogram) brain activity associated with students’ attention and engagement in learning environments. Per the video below, the information culled from BrainCo devices would ultimately be used by schools to design strategies for improving teacher or student performance.

BrainCo’s founder launched the startup to improve education in China. The company says that creating a “brainwave database” can provide a school- or district-wide approach to quantitatively measuring student engagement in class. 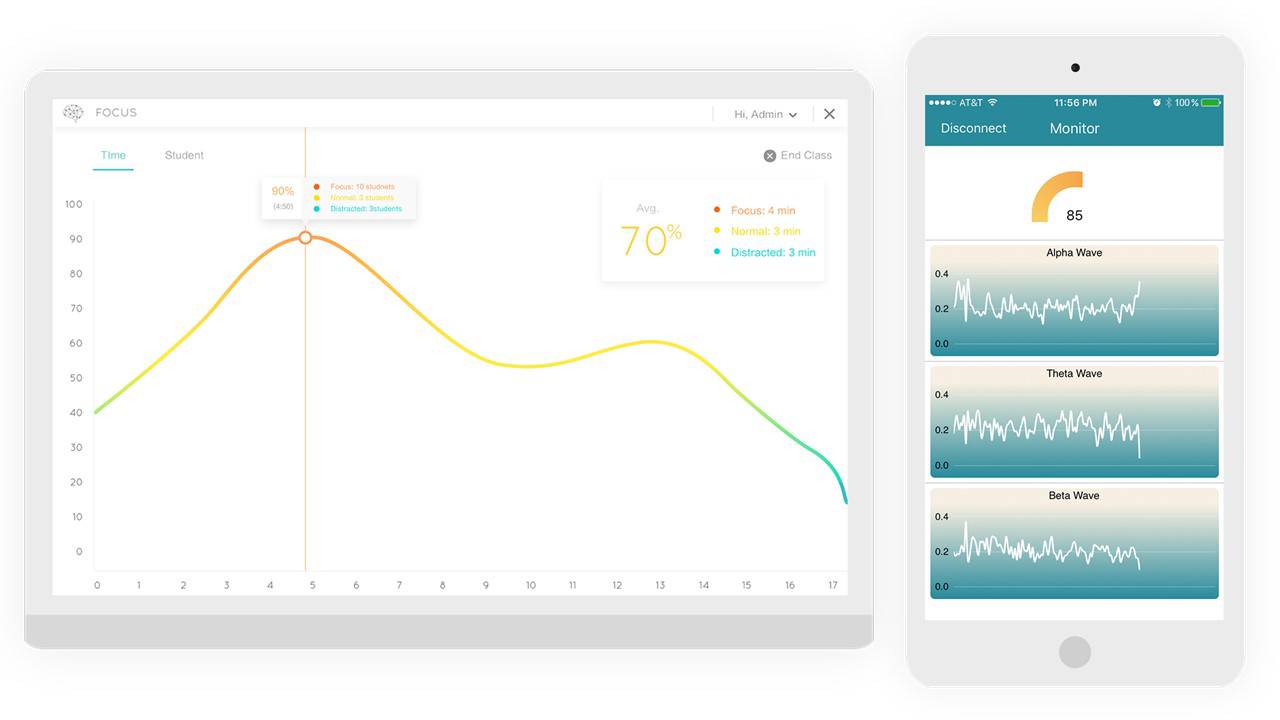 For one, enhanced brain-computing systems could put an end to surveys and focus groups, which are notoriously flawed. Individuals often shield their biases or intentions in surveys, focus groups, or sales settings — for example, trying a free wine sample and pretending as if you’ll buy the bottle.

With brain analytics, marketers will no longer have to rely on your word. Rather, they could “see” how your brain behaves as you drink pinot in a wine-tasting focus group. Linking that data to something as simple as a loyalty card could give brands and stores far better insights into how your preferences align with your actual purchase activity.

From that starting point, marketers’ options for creating personalized sales and promotion tactics get a lot more targeted — all the way to sending you the wine with the label design that causes more of your pleasure neurons to start firing.

As previous examples showed, EEG and ERP data can already provide a wealth of commercially useful brain information from sensors outside the head.

But in the healthcare sector, technology is going directly inside the brain, where it can help address the debilitating effects of neurological conditions.

Problems like stroke and paralysis can limit or eliminate an individual’s ability to move or walk unassisted. Researchers are continually exploring the ways brain-tech can help patients with neurological damage regain mobility and independence.

After implanting a silicon microchip into the motor cortex of a person with paralysis or stroke-related damage, for example, scientists can pick up and decode EEG signals. Those signals can then power the operation of prosthetic limbs, wheelchairs, or even keyboards — enabling patients to “type” their thoughts, as in the video below.

Brain tech will also lead to faster, more accurate diagnoses. Once more sophisticated microchips can interact directly with human nervous systems on a day-to-day basis — not just in research labs — the signs of Parkinson’s, Alzheimer’s, and other neurological conditions could be spotted by sensor-equipped devices much sooner than they can be detected today.

The brain’s role in human health also extends beyond cognition and mobility to our psychiatric and psychological well-being. Doctors have modified the brain’s circuitry to treat psychiatric illnesses and mental health problems for centuries, using procedures ranging from lobotomies to electroshock therapy.

Of course, those once-prevalent procedures have largely fallen out of favor as we’ve gained more and better information about the human nervous system.

But our knowledge about the human mind still has miles to go. Clinical research in the brain is not easy to conduct, so our medical system still lacks end-to-end understanding of how the brain’s 86 billion neurons interact, and what effects those interactions have on mental health.

Improved brain-computing technology will transform — and vastly improve — our ability to understand mental disorders and their causes at the neurological level.

Once we have better brain-computing microchips (capable of collecting and processing ever-more comprehensive brain data) implanted in our cortexes, information that today can only be obtained from brain scans will be available to us automatically. This will lead to more accurate diagnoses and more effective testing for mental disorders, as well as the development of ever-more effective, targeted mental health treatments. 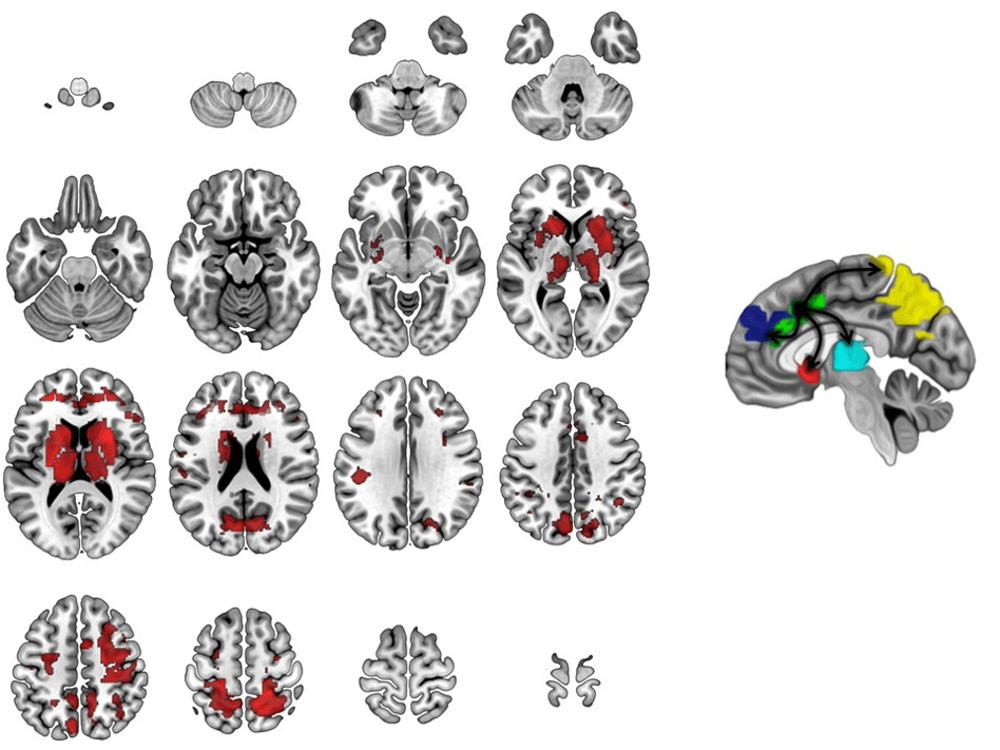 Above: Visualizations of how the brain’s arousal center (the anterior cingulate cortex) is “hijacked” in children with OCD. CREDIT: Frontiers in Human Neuroscience 2015

At least one high-profile, sports-related injury could be transformed by brain tech — potentially setting an example for diagnosing and treating traumatic brain injuries more broadly.

Chronic traumatic encephalopathy, or CTE, is known to afflict athletes, especially football players who experience head trauma. CTE can lead to severe emotional and behavioral disorders: The disease is often marked by mood swings, lapses in judgment, and problems controlling aggression or impulses (all of which are hard to attribute to CTE without visibility into an individual’s brain).

There are endless questions about the risk factors, causes, and consequences for traumatic brain injuries: Is there an age at which athletes become more vulnerable? Are certain positions more prone to develop CTE than others?

Brain hacking will help answer those questions: Once the brains of NFL players (or other athletes) can be “chipped” for long-term study, the sports community will gain a greater understanding of the risks and causes of CTE, among many other diseases.

With that knowledge, better programs for risk awareness and prevention can be designed and pursued — with brain-connected helmets being just the beginning. 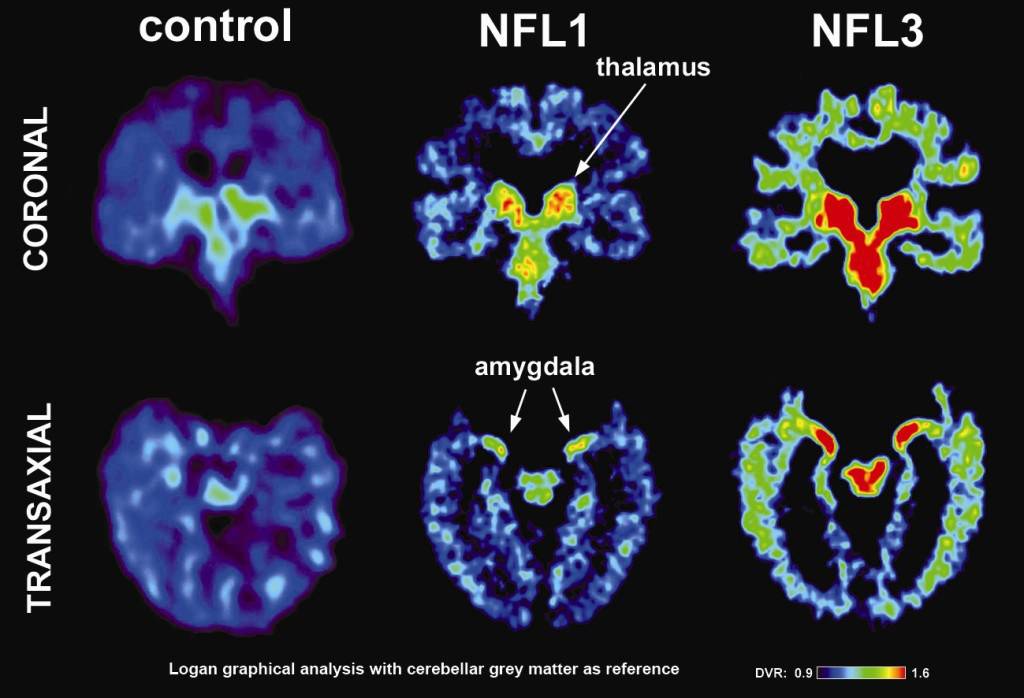 In the entertainment world, brain-based research could reshape content development.

Neuroscience researchers from Northwestern University, for example, recently studied how people’s brains behave as they watch movie trailers, and then used the data to predict later box office sales.

The research tested a hypothesis around the commercial value of a trailer’s ability to incite neural similarity among audience members: By equipping 122 study participants with EEG-monitoring headsets, the scientists could gain insight into which trailers incited similar patterns of brain activity among larger percentages of individuals in the group.

“It turns out, when our brains are truly engaged with the content we are watching, they essentially look the same as one another.”
–Neuroscience Ph.D. researcher Sam Barnett

As neurotech continues to advance, these kinds of research applications may become useful at much earlier stages in the production of content.

For example, the same study method used by the Northwestern University researchers could be used to watch how viewers’ collective engagement levels rise or drop throughout the course of a movie (or even a written screenplay). With that data in mind, film and TV studios could modify elements of plot or character to better appeal to audiences.

Brain hacking will also play a role on the battlefield. DARPA, the research arm of the US Department of Defense (DoD), has funded a variety of neurotech projects through its NESD program (for Neural Engineering System Design).

The NESD initiative’s aim is to develop a “portable neural interface system capable of providing precise communication between the brain and the digital world” – which is essentially the same big-picture objective as Elon Musk’s Neuralink and Bryan Johnson’s Kernel.

DARPA has other brain-tech efforts in the mix, as well. One seeks to use implantable microchips to improve memory in soldiers afflicted with brain injuries; another uses neuro-data to control robotic prosthetic limbs. Yet another is interested in using “peripheral nerve stimulation” to enhance learning processes.

With the nerve stimulation research, the DoD aims to train soliders faster and more effectively by boosting what’s called “synaptic plasticity”: By stimulating certain peripheral nerves — which is done painlessly, through the skin — the research seeks to hyper-activate areas of the brain used in learning, per DARPA’s graphic below. 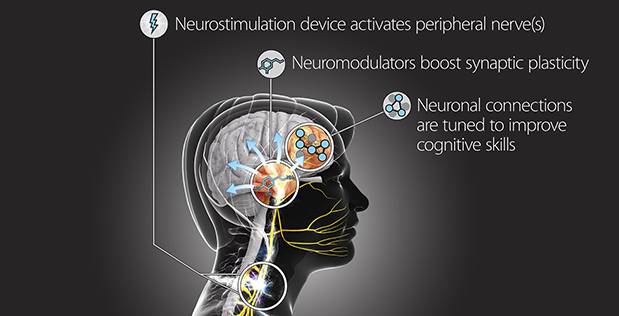 Most of these research initiatives remain in the early or exploratory phases. But the sheer number of projects — and the millions of government dollars behind them — have some fearing the creation of cognitively enhanced “super soldiers.” Or, that our future super-soldiers could be brain-hacked by the other side.

As brain-hacking tech progresses, scientists are beginning to speak up about the threats, risks, and ethical questions posed by neurotechnologies and AI.

In a recent Nature article, experts noted that “neural devices connected to the Internet open up the possibility of individuals or organizations (hackers, corporations or government agencies) tracking or even manipulating an individual’s mental experience.”

As industries adopt brain-hacking tech, they will have to prepare for scenarios where brain tech goes awry. The DoD, for example, will need to look at minimizing cyber-related threats, as it works to advance neurotech development.

The hyper-smart super soldiers of the future may be our best protection from enemy threats, or our greatest national security risk … or both, at the same time.