Research Brief
2496
The IIoT trend affects asset-heavy industries from oil and logistics to agribusiness. Deals also surged in 2015 to nearly 200, but a weak Q4'15 has cast some doubts on the space.

Internet of Things startups have driven a cumulative $7.4B in venture investment over the past 6 years, according to our data. Within the IoT, many companies are seizing the opportunity to apply IoT technologies like ever-smaller (and increasingly inexpensive) embedded chips to asset-heavy industrial verticals like manufacturing, logistics, mining, oil, utilities and agriculture.

So far, the Industrial IoT or IIoT wave has mostly been mostly led by the old guard of industrial tech companies such as GE, IBM, and Cisco, which have championed such concepts as the “Industrial Internet” (GE) and the “Internet of Everything” (Cisco).

But startups are nipping at the heels of these giants by linking sensors to machinery (Samsara), laying down technical infrastructure and cloud services (Sigfox, Arrayent), and helping companies spin the data into useful insights on the backend (Sight Machine, Uptake Technologies), with some of these startups offering combinations of these services.

Meanwhile, UAVs from Skydio and Sky-Futures are mapping construction sites and inspecting oil and gas infrastructure, robots like those provided by Clearpath Robotics are manning warehouses and assembly lines, and chips from startups including Tego and Xerafy combine RFID and IoT tech, allowing aerospace, energy, and life science firms to track assets as they move through their facilities.

Using CB Insights data, we examined investments into these IoT companies targeting enterprise and heavy industry, including deals and funding, investments by stage, most well-funded companies, and active investors.

Funding to Industrial IoT companies has more than quadrupled over the past 5 years, with year-over-year growth in every year except 2013. This past year saw 83% growth over 2014’s funding tally, making 2015 a boom year overall for the IIoT. 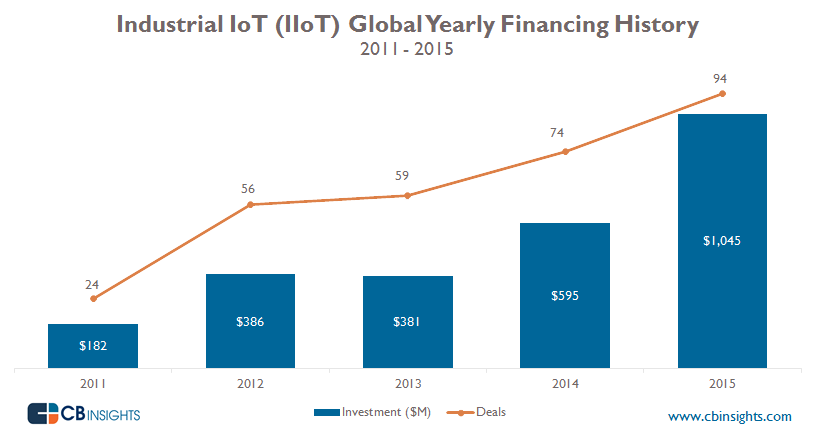 The quarterly trends echo the growth seen over the past several years, but also reveal a drop-off in funding at the end of 2015. Q2’15 was the peak in IIoT funding, with a record $313M invested over 26 deals. Large deals that quarter included a $40M growth round to connected fleet system Telogis and Samsara Networks‘ $25M Series A.

Since that high-water mark, however, the dollars and deal volume have slipped considerably. Q3’15, for instance, saw a 22% fall in invested capital compared to the previous quarter. 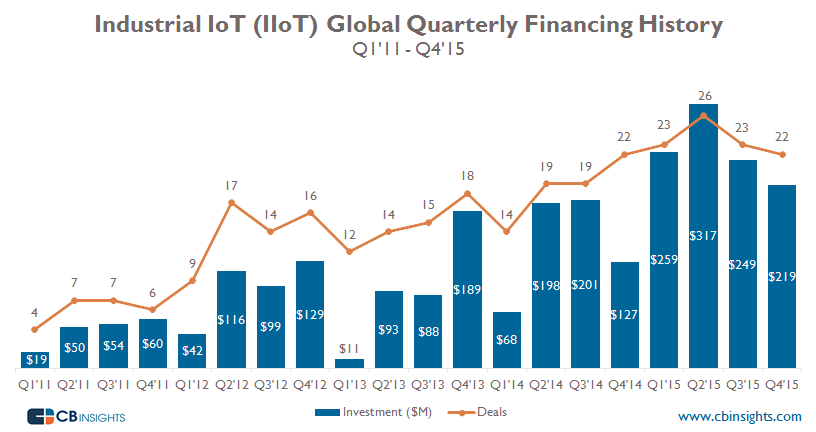 The share of deals has remained relatively stable over the past few years, with early-stage (seed and Series A) deals dominating and making up between 50% and 61% of all deals since 2012. Mid-stage accounted for 20% to 27% of deals over the past five years. And, interestingly, late-stage deals have retreated slightly, taking 12% and 10% of IIoT deal share in 2014 and 2015, respectively. 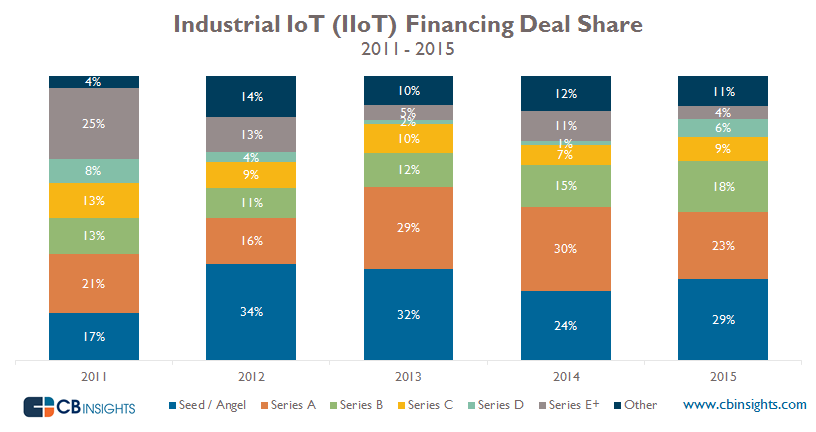 In terms of dollar share, however, funding doesn’t skew as heavily toward the early stage. Late-stages deals accounted for 34% to 52% of dollars invested 2011 through 2014. Since then, however, that sizable dollar share plummeted in 2015 to only 16% of dollars. Instead, 2015 saw a boom in mid-stage investment dollars, which accounted for 49% of investment dollars, compared to just 32% the year before. 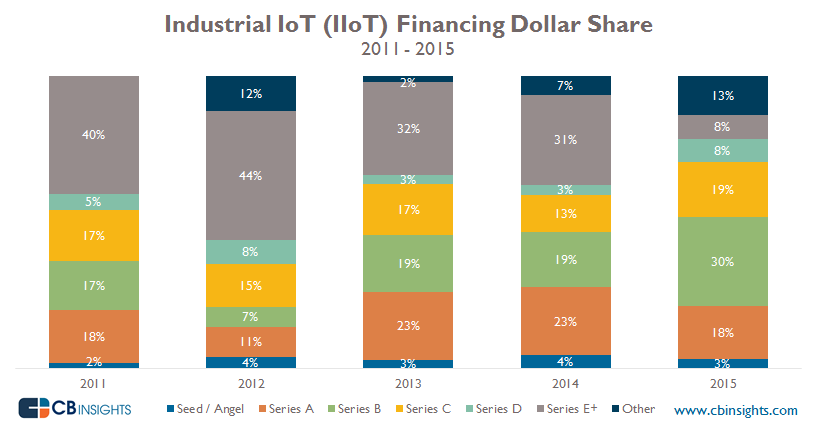 Many of the IIoT companies with big rounds in recent years have focused on SaaS platforms, IIoT infrastructure, RFID-enabled supply chain sensors, and industrial robotics.

The most well-funded over the past 5 years was Sigfox, a France-based provider of cellular infrastructure for IoT and machine-to-machine communications. Sigfox most recently raised a $115M Series C from a wide range of investors and corporate venture arms including Intel Capital, SK Telecom Ventures, and Telefonica Ventures, among others.

Next most well-funded was Telogis, a data platform for connected trucking fleets. Telogis raised multiple rounds from Kleiner Perkins Caufield & Byers, and also has seen investment from GM Ventures.

In third was Jasper Technologies, the IoT cloud platform and services company that recently was acquired by Cisco at a $1.4B valuation. Jasper first raised its Series A from Benchmark Capital and Sequoia Capital, both of which have coinvested in every subsequent round with the exception of its pre-acquisition Series F.

(Note: Jasper Technologies and Plex Systems have been acquired.)

As was the case in the broader IoT, Intel Capital was the most active investor overall. Recent IIoT investments by Intel Capital include IoT analytics platform WebAction (aka Striim), industrial-focused drone software developer Airware, and Ossia, a maker of wireless power solutions for IoT sensors.

Want more data about top Industrial IoT companies? Login to CB Insights or sign up for free below.