India now is home to a billion dollar tech scene. With increased attention to the country, we looked at the most active tech VCs in India by stage.

With a billion dollar tech scene, and Flipkart recently raising a $1B round of financing, 2014 could be a record year for tech in India. With all of this hype, we wanted to dive into India’s most active tech VCs overall and across multiple stages.

Of all VCs (Super Angel, VC, Corporate Venture Group) Blume Ventures was the most active in terms of unique companies invested in, with over 40 tech companies receiving funding since 2009. Accel Partners and Sequoia Capital India rounded out the top 3. 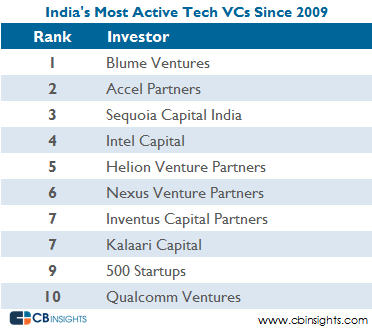 For point of reference, Blume Ventures is a Mumbai-based fund that provides seed funding to tech companies, in the form of $50-300k investments. Accel’s India tech investments are largely focused on the early-stage, however the company did participate in Flipkart and Myntra’s Series D rounds in 2012. Conversely, Sequoia Capital India had a more even split of early and mid to late-stage investments including participation in a $41.8M July 2014 Series C financing for ANI Technologies, a marketplace for cabs and car rental services.

Blume Ventures and Accel Partners also topped the most active early-stage tech VCs in India with investments in over 25 India-based companies each. 500 Startups was third with seed investments in a variety of Internet and Mobile companies including SocialCops, Intap Labs, and Quest. Only half of the top early-stage tech VCs in India are local highlighting foreign investor interest in the world’s 2nd most populous nation as well as the relatively small size of the local investment landscape. By way of comparison, the UK has 9 of 10 most active early-stage tech investors based locally. 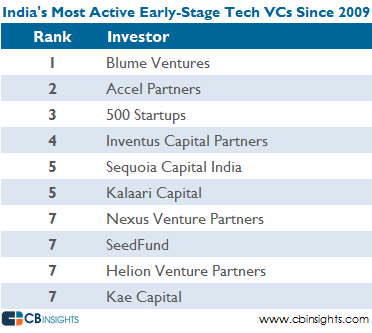 Nexus Venture Partners, Intel Capital, Accel Partners, and Kalaari Capital led all investors as the most active Tech VCs in India at the mid-stage since 2009. Some of Intel’s notable investments include Yatra Online, Fashionandyou.com, as well as Vizury Interactive. 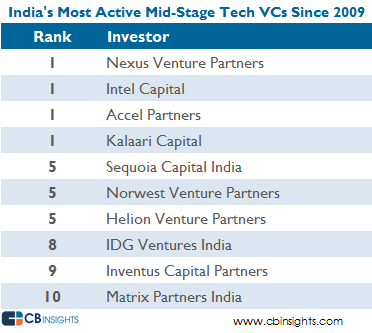 Want to track the investors, acquirers and companies receiving investment in India. Login to the CB Insights venture capital database or create a free account below.