In comparison to e-commerce, where retailers can track shopper activity, brick-and-mortar stores are somewhat of a “black box” for data collection. In response, dozens of startups have sprung up since 2012 to help retailers optimize in-store operations. These startups offer everything from sensors that track foot traffic, to interactive tablets that boost customer engagement, to mobile point-of-sale software.

Our in-store tech list includes hardware and software startups that have a significant use case within brick-and-mortar consumer retail stores. Our infographic on the Store of the Future illustrates many of the categories in detail. We’ve also separately looked at startups that specifically focus on restaurants here, and technology used inside retail warehouses here.

Deals to in-store tech startups dipped in Q3’16 to 41, compared to 52 deals the prior quarter, but that deal level still remains notably higher than it was in any quarter in 2015.

The Guangzhou-based store management software platform Yunnex raised this quarter’s largest round, a $45M Series B from GSR Ventures and Ajisen (China) Holdings, which is an international ramen chain. In the second-largest deal of the quarter, Zenreach, which provides retailers with guest Wi-Fi platforms with analytics and proximity marketing features, raised a $30M Series B from investors including Founders Fund, First Round Capital, and 8VC. GoSpotCheck, mobile software that helps brands collect in-store data, ranked third with a $16.5M Series B. Zenreach mainly works with local restaurants and retailers, while GoSpotCheck has worked with a range of brands such as toy robot company Sphero and Justin’s Peanut Butter. 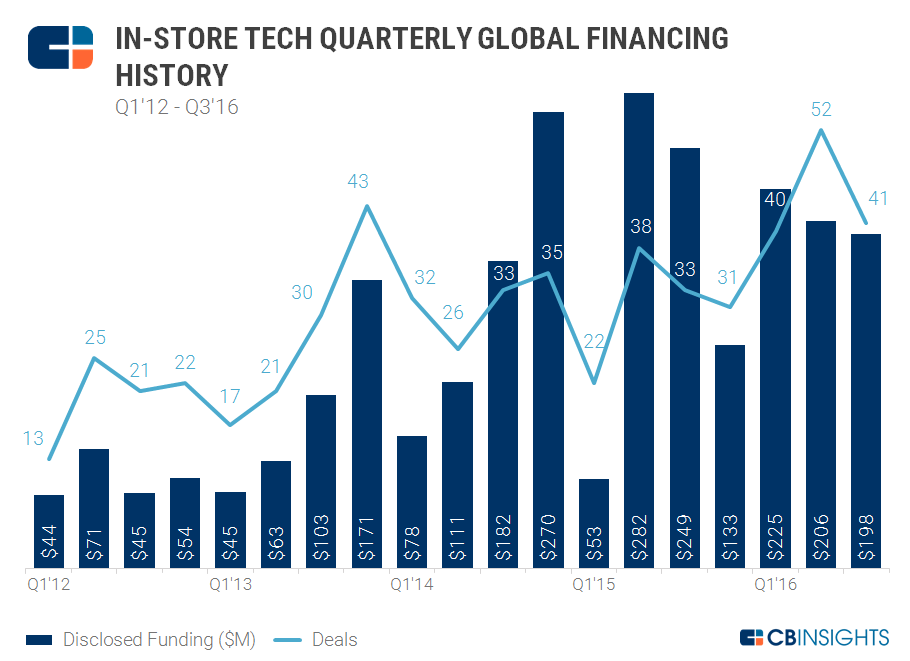 Despite the dip in Q3’16, in-store tech deals and dollars are both still on track to hit all-time highs this year. To date, investors have poured $648M into the sector across 140 deals — already more deals than took place throughout all of 2015.

If investment continues at its current rate, we may see nearly $800M in investment across over 170 deals to in-store tech startups this year. To date in 2016, in-store rewards platform FiveStars attracted the category’s largest investment, a $50M Series C in Q1. China-based store management platform Yunnex (mentioned above) followed with its $45M Series B in Q3, while visual merchandise management software Trax Image Recognition pulled in a $40M Series C in Q2 to rank third.

In 2015, investors made 124 in-store tech deals worth $716M in total. RetailNext, a big data platform for brick-and-mortar retail, saw the largest deal by far with a $125M Series E in Q2’15. The deal attracted interest from various corporate investors, with American Express Ventures, Qualcomm Ventures, and Nokia Growth Partners all participating alongside VCs such as August Capital. The second-largest deal of 2015 was less than half that size — a $61M Series C to Lightspeed POS, a store management platform, in Q3’15. 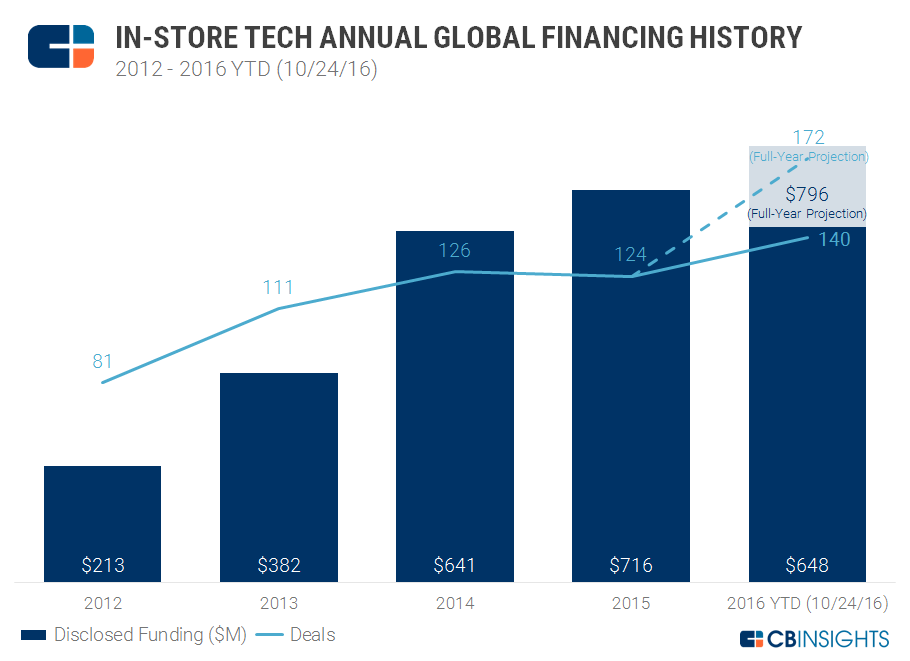 The most well-funded private in-store tech startups have a variety of different business models. Two even leverage artificial intelligence: Blue Yonder, which optimizes merchandising with a focus on grocery stores, and Trax Image Recognition, which uses machine image recognition analysis to help brands like Coca Cola and AB InBev monitor their product assortments in store. The list also highlights technology corporates’ interest in in-store tech, a topic we previously explored in more detail here. Nokia, Motorola, and Google have all invested in startups on the most well-funded list below.

Want more data on retail tech and e-commerce startups? Log in to CB Insights or sign up for free below.