These technologies are increasing the efficiency of brick-and-mortar stores and bridging the in-store/e-commerce divide.

Are investors paying attention? We used CB Insights data to put numbers to funding and deal trends, and found that deals to startups offering in-store technology are on track to hit an all-time high this year.

We define the in-store tech category as startups bringing traditional digital features to the in-store retail experience. These include connected sensors that track store foot traffic, digital and AR/VR-powered in-store advertising, beacons for proximity marketing, in-store point-of-sale software, and more. While some of these startups, such as real-time analytics dashboards, do pull in data from e-commerce channels, all the companies on our list have significant in-store use cases.

Deal and dollar flow to in-store tech startups are on track to reach an all-time high this year; if funding rounds continue at their current rate, 2016 may see over 150 deals in the space worth over $600M.

To date this year, investors have led more than 80 in-store tech funding rounds worth $334M in aggregate. Point-of-sale loyalty platform FiveStars pulled in the largest round so far this year with its $50M Series C. Tied for second are a $20M Series C to Euclid Analytics, which provides in-store analytics by collecting smartphone signals from shoppers’ phones, and a $20M Series B to AppCard, which adds personalized marketing features to receipts.

Last year, funding reached $657M across almost 100 deals, showing 38% dollar growth from 2014 despite deal growth being basically flat. The funding increase in 2015 was partially driven by a $125M mega-round to RetailNext, an in-store analytics provider and the most well-funded company in this space. In contrast, the largest deal in 2014 was just $65M, a Series C to point-of-sale platform Revel Systems (Revel’s deal also included a $25M line of credit, and a $10M Series C-II a week after the $65M deal). 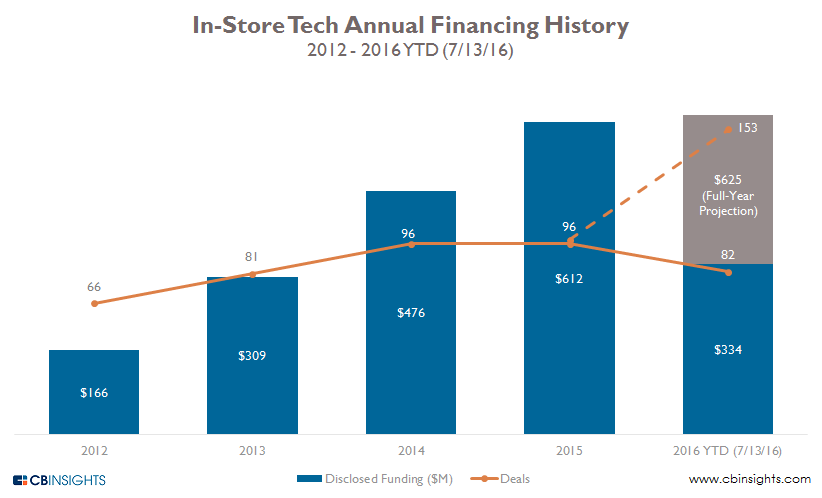 Deals to in-store tech startups increased for the second-consecutive quarter in Q2’16, climbing to 45 deals from 31 deals in Q1’16, and 24 deals in Q4’15. This is the first time deals have increased for more than one quarter in a row since 2013, when deals in this category saw a three-quarter growth streak and hit 31 in Q4’13. .

Funding dollars slightly declined from $168M in Q1’16 to $158M in Q2’16. Q1’16 saw three deals worth $20M+ (all mentioned above) while the largest deal in Q2’16 was just $19M, claimed by in-store personalized point-of-sale marketing platform Index. The second-largest deal in Q2’16 was a $16M Series B to StoreKing, which provides digital shopping kiosks to brick-and-mortar retailers in rural India. In third was a $15M Series B to Eversight, a platform to track ROI for in-store promotions. 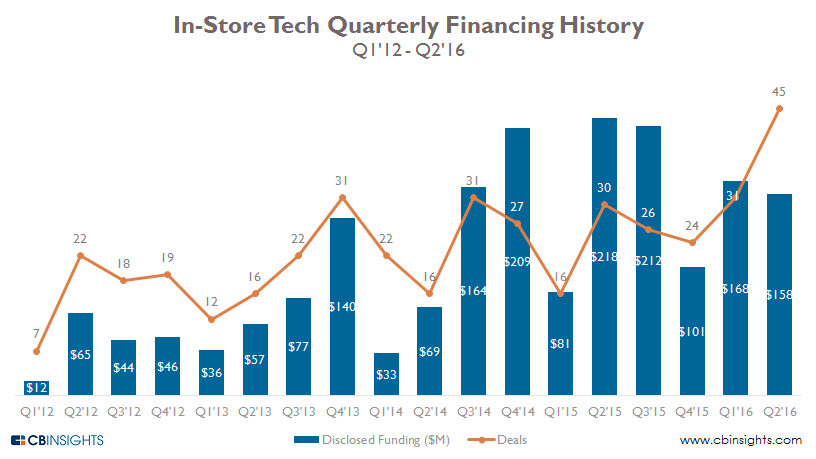 We see a variety of focuses among the most well-funded in-store tech startups, including IoT sensors, payment software platforms, and digital in-store marketing. View the full list and select investors below.

Want more data on the startups and investors transforming retail? Login to CB Insights or sign up for free below.