Research Brief
1297
Among the corporate investors that have made a recent investment in the expanding but still nascent in-store analytics space are Motorola, Intel, Hearst, Nokia, American Express Ventures, Tyco and Salesforce.

From beacon technologies and video intelligence to mobile WiFi and PoS systems, the retail sector is using big data to track its in-store customers.

Last fall, we’d highlighted the growth in the space and now it’s clear that ‘the goal of providing Google Analytics-like data capabilties for the physical retail store’ is gaining even more steam on the funding front.

Fueled by a host of deals in Q4 2013 including to startups such as Index, Bytelight, Prism Skylabs and Nomi, 2013 saw 34 deals raise just over $140M. On a year-over-year basis, funding to the in-store retail analytics market rose 163% while deals increased 36%. 2014 has seen a slower pace of deal activity but also has seen the space’s largest to date – a $30M deal in July to RetailNext from investors including Nokia Growth Partners, Qualcomm Ventures and Activant Capital Group.

The rise in funding activity doesn’t come without huge risks in privacy and tracking concerns, though. This month, Nomi announced a number of layoffs reportedly related to a shift in Apple’s mobile WiFi tracking policy. Less than a year ago, Nomi raised $10M in a Series A round led by Accel Partners.

While the in-store retail analytics space has gained the interest and investment of prominent VC investors including Benchmark and Accel, corporate investments in the space has really heated up. Among the corporate investors that have made recent investments in the expanding but still nascent space are Motorola Solutions Venture Capital, Intel Capital, Hearst Ventures, Nokia Growth Partners, American Express Ventures, Tyco Ventures, Presidio Ventures and Salesforce. 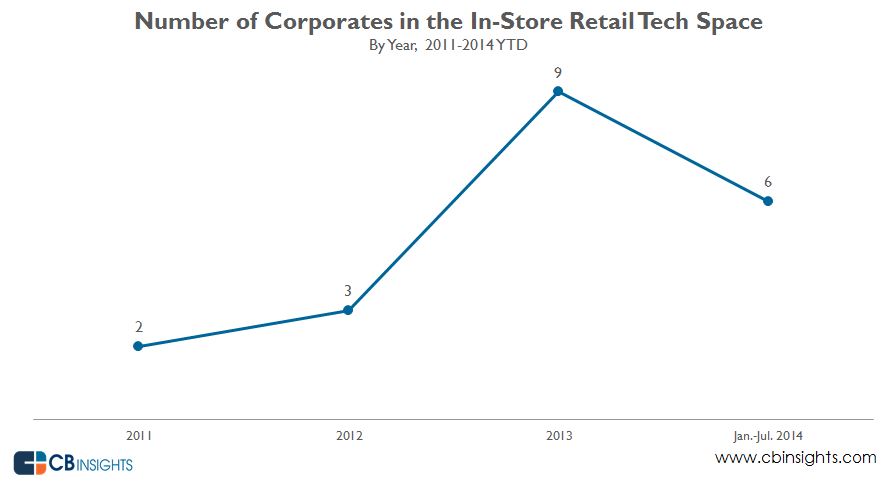 Looking for more retail tech data and analytics? Check out the CB Insights Venture Capital Database. Sign up free below.