With funding and industry interest in hydrogen tech reaching record highs, we explain how the element can be used to decarbonize operations — across manufacturing, transportation, and utilities — and address key challenges and opportunities in the space.

As the manufacturing, transportation, and utility sectors look to reduce their carbon emissions, hydrogen could be the most promising energy source.

But for adoption to catch on broadly, the price of hydrogen needs to drop considerably to compete with fossil fuels. Hydrogen production capacities and distribution networks will also need to ramp up to support higher volumes.

To address these challenges, investors plan to pour about $500B into hydrogen projects globally through 2030. These initiatives are designed to reduce the price of hydrogen — especially green hydrogen — dramatically.

Meanwhile, companies are beginning to power factories, vehicles, and utilities with hydrogen as they work toward their carbon-neutral goals.

Below, we address the following questions:

What is hydrogen? How is it produced, distributed, and used?

Hydrogen is the most abundant element on earth, and it has a history of being used for energy. In the 1950s, NASA used liquid hydrogen as rocket fuel — and today, the industrial gas is commonly used in petroleum refining and fertilizer production.

Hydrogen has also recently gained attention for its potential to help decarbonize manufacturing, transportation, and energy. The molecule only emits water vapor when used as a fuel in hydrogen fuel cells, and it does not emit CO2 emissions when combusted.

That said, there are still some risks in using hydrogen for energy. For example, powering production by burning hydrogen creates NOx (nitrogen oxide) — a poisonous gas — so companies that choose to combust hydrogen will still need to implement scrubbers to clean waste gases.

There are 3 kinds of hydrogen: gray hydrogen, blue hydrogen, and green hydrogen. The production process and emissions vary by type. 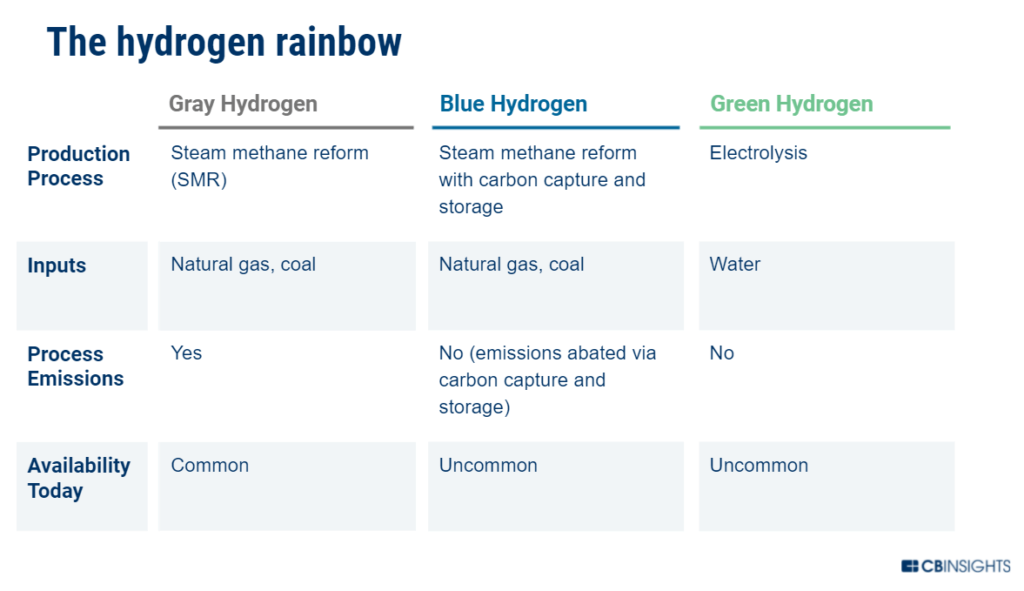 Most hydrogen produced today is gray and made via steam methane reform (SMR), which produces process emissions.

As companies work towards carbon neutrality goals, they are aiming to use more blue and green hydrogen. This means that more hydrogen will need to be produced via electrolysis — the splitting of water (H2O) into oxygen and hydrogen.

Hydrogen infrastructure is being built out across three main segments:

Each part of the hydrogen value chain is at a relatively early developmental stage. To bring the industry to the next level, each segment is seeing increased investment, pilot, and construction activity:

Despite the immense amount of work and funding needed to get the hydrogen market off the ground, companies could see huge gains from implementing the tech, as we discuss below.

Why does hydrogen matter?

With mounting government regulations and investor pressure to decarbonize, manufacturing, energy, and transportation companies are increasingly turning to hydrogen to reduce their carbon footprints.

For manufacturers, hydrogen is the de facto energy source that they will use to decarbonize their operations. While solar and wind could help decarbonize the grid, current methods to harness them cannot generate energy densely and consistently enough for manufacturing operations. Hydrogen, however, can fuel the high-temperature manufacturing operations related to steel, glass, chemical, and cement. On-site, modular electrolysis facilities are particularly appealing for factory sites, as they eliminate the high hydrogen distribution costs.

For energy and utility companies, hydrogen can be used for energy storage, as it is an energy carrier that can capture and store renewable energy from solar, wind, and other renewable energy sources. This can help power homes, cities, and factories at night, for instance, when the sun isn’t shining. Another benefit associated with hydrogen is that it can be used to store energy for months instead of days, compared to conventional energy storage.

As transportation OEMs consider their green vehicle options, hydrogen-powered vehicles have some advantages over electric vehicles. Specifically, fuel cell electric vehicles (FCEVs), which are powered by hydrogen fuel cells, can travel longer distances with shorter refueling times. This means that hydrogen is more ideal for trains, trucks, and other heavy machinery that may not have the time or capacity to recharge often. This could help bolster operations in remote locations, like mines, that might have limited access to charging stations.

What do manufacturing, transportation, and energy companies need to consider for adoption?

There are 4 major aspects that must be considered in the coming years when it comes to procuring sufficient hydrogen — particularly green hydrogen:

For manufacturers, energy, and transportation companies, each of these factors is crucial for the successful implementation of hydrogen-powered solutions.

To achieve these lower costs, companies are looking to chip away at this problem by:

All 4 of these measures must be taken in order to rapidly reduce the cost of green hydrogen, though the timeline to reach the $1-2/kg is unclear.

Globally, companies are already putting up plants to increase supply. According to the Hydrogen Council, there were 359 hydrogen projects in progress — across production, industrial usage, transportation, and infrastructure — as of July 2021, an increase of 131 projects (57%) since February.

As hydrogen plants start up and build up hydrogen supplies, plant owners will need to increase plant utilization and reduce capital expenditures to boost their profitability.

In terms of sector usage, LOHCs are suited for manufacturing, transportation, and utilities, as LOHCs only require small-scale modules to release hydrogen from carrier chemicals. 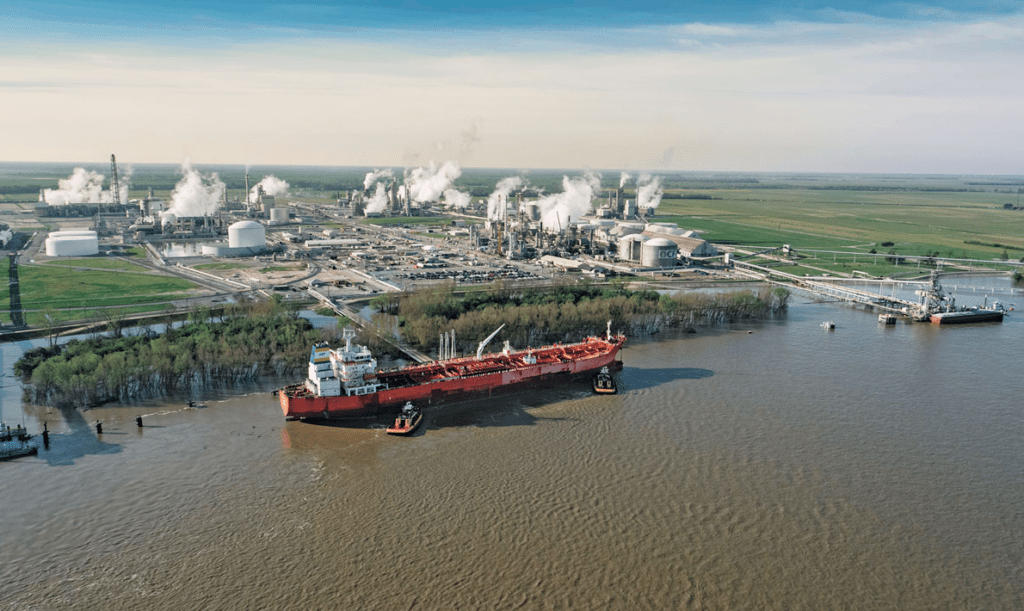 CF Industries‘ industrial complex in Donaldsonville, Louisiana, where the company is adding a green ammonia plant.

In particular, ammonia, a common fertilizer, has garnered interest from corporates like Air Products. Ammonia is already widely produced and, unlike hydrogen, the compound does not need to be stored in pressurized tanks. To take advantage of this new business opportunity, fertilizer giants like CF Industries and Yara are already building green ammonia plants. Since ammonia is so promising, companies across manufacturing, transportation, and utilities are also working on solutions to use it as fuel.

One area where companies see high potential for ammonia is shipping. Because it does not require pressurized storage and is energy dense, the chemical is more ideal for long-haul shipping than standalone hydrogen. Wärtsilä, for instance, is currently testing ammonia-powered engines in Finland — the company recently ran marine engines on 70% ammonia-blended fuels.

However, companies still have to determine how to best build crackers, engines, and fuel cells modified to burn ammonia.

While green hydrogen is the goal, companies are looking to produce, distribute, and use hydrogen faster than builders can put up plants. In the meantime, as several executives are discussing on earnings calls, companies intend to start by using gray or blue hydrogen, and they will eventually transition to using green hydrogen as supply ramps up and prices come down. 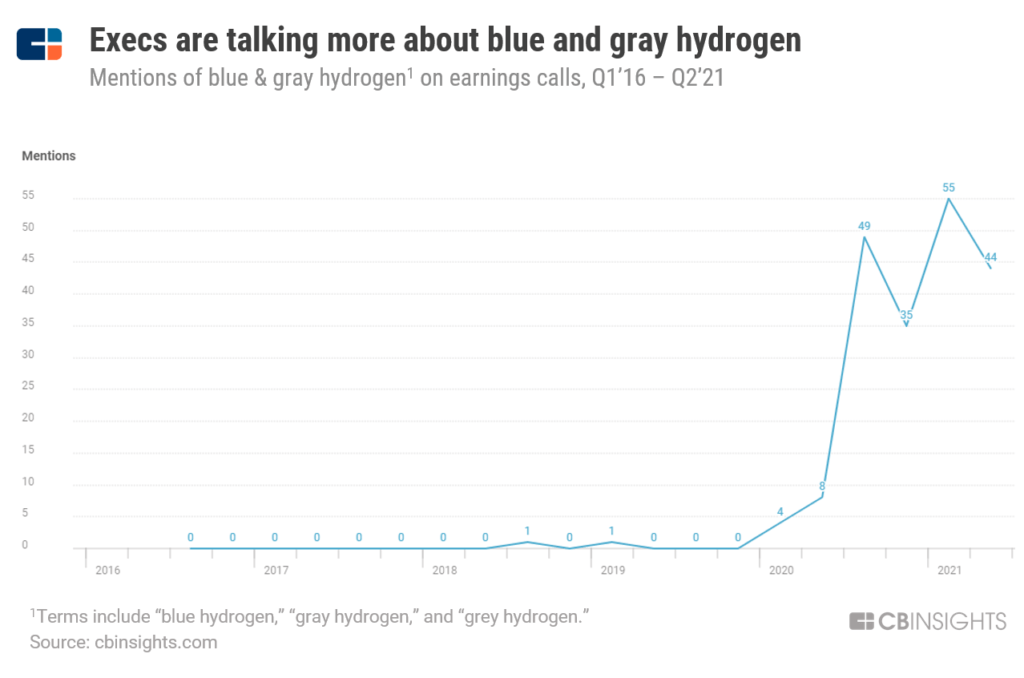 However, at present, some green hydrogen is not necessarily less polluting than gray hydrogen, as companies are still working on scaling up renewable energy in grids used for production. In countries like China and India, fueling green hydrogen production from the grid actually produces more emissions than SMR production, as these countries still rely heavily on fossil fuels for power. As such, transitioning to cleaner grid power sources as soon as possible is crucial to decarbonizing the global economy.

Monitoring the ramp-up of local solar and wind farms could help companies figure out when green hydrogen production will truly be less polluting than SMR. This is an important factor for manufacturing, transportation, and energy companies to consider, as having greater proximity and accessibility to solar and wind power could mean a faster shift to green hydrogen.

To handle the oncoming wave of hydrogen supply, companies will have to move hydrogen on a scale much larger than what’s currently required. Corporations are facing the challenge head-on, with several pilots in place to test different ways to move hydrogen safely.

National Grid, for instance, is spending about $14M to build a hydrogen test facility in England. The utility giant aims to find out if typical steel pipelines can handle hydrogen and natural gas-hydrogen blends, as hydrogen can degrade pipelines. The facility will also determine whether hydrogen can handle typical transmission pressures, as this could also weaken pipelines.

The US Department of Energy’s National Renewable Energy Lab (NREL) is also currently working to address the issue in its HyBlend project.

Manufacturers, transportation OEMs, and utilities should closely monitor these tests to determine whether they will need to replace their current infrastructures in order to safely handle hydrogen.

On the consumer-facing side, companies are scaling up hydrogen fueling stations. For instance, FirstElement Fuel has built out and operates the largest hydrogen network in California. Concurrent to the ramping up of hydrogen production, companies like Hyzon Motors are developing fuel cell electric vehicles (FCEVs), particularly for commercial uses like heavy trucking. The growing hydrogen fueling networks will help enable broader usage of these vehicles once they get on the road. 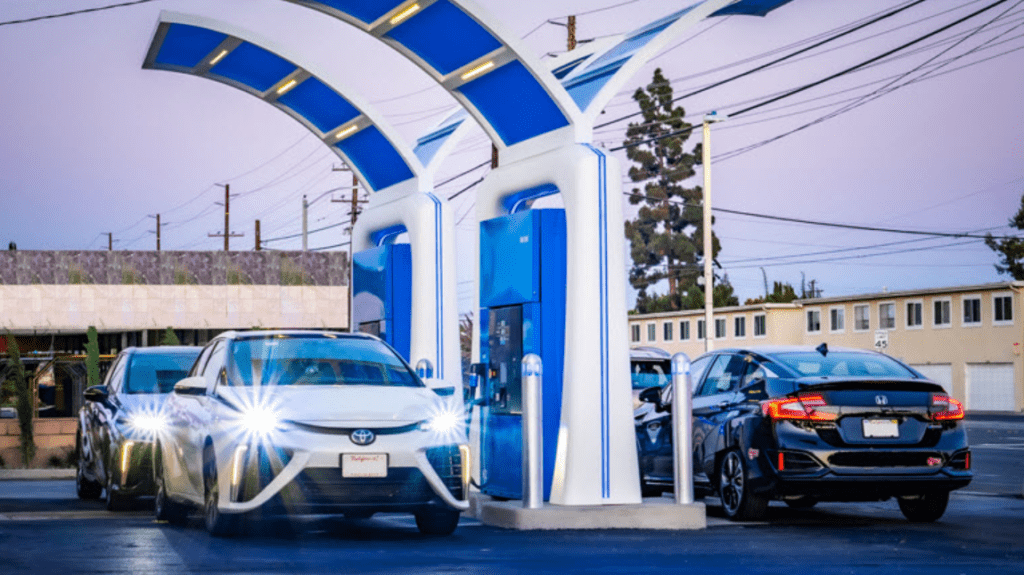 One of FirstElement Fuel’s hydrogen fueling stations in California.

What does hydrogen investment activity look like? Who are the key players?

Private funding in hydrogen tech has already hit a record high in 2021, surpassing the previous record set in 2019. So far this year, VC investors have poured $694M in funding across 54 deals. 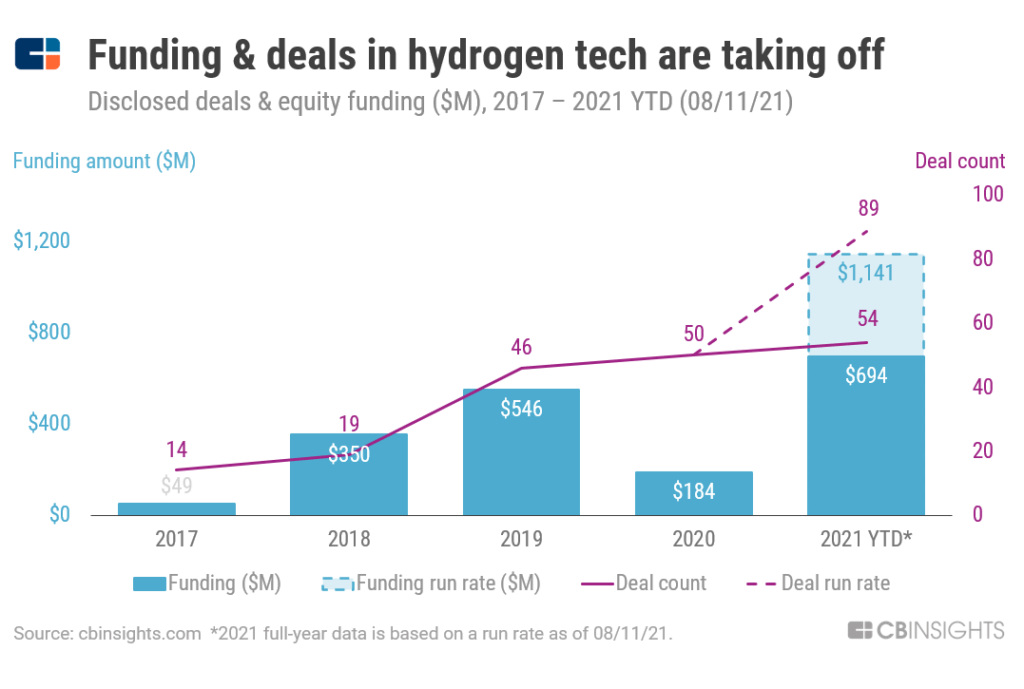 To see where each VC is investing, click through below to see the Hydrogen Tech Expert Collection.

Track companies that are driving innovation in hydrogen energy.

Public companies are also pouring funding into hydrogen. Much of the aforementioned $500B invested in hydrogen facilities is coming from public corporations, as they are financing and building most of the largest hydrogen projects across the world. A considerable portion of public funding was committed in 2020, which stands in stark contrast to the drop in private deals and equity funding seen over the course of 2020.

For example, in July 2020, Air Products announced plans to spend $7B to build the world’s largest green hydrogen plant in Saudi Arabia. Additionally, McPhy recently selected a site in France to build a hydrogen gigafactory.

As for private activity, here is a selection of the biggest private deals and notable partnerships in the space:

Companies should also monitor the development of hydrogen powertrains, as improvements could greatly boost adoption. OEMs like BMW, Toyota, and Hyundai are working on advancing the powertrains in their FCEVs.

Another up-and-coming factor in reducing the cost of hydrogen is eliminating the inclusion of expensive precious metals in electrolyzers, particularly PEM electrolyzers. Copenhagen-based Hymeth has developed a non-precious metal alloy catalyst made from copper, nickel, and iron, which the company claims performs well in comparison to standard precious metal catalysts.

Other companies, like Enapter, are creating different types of membranes called anion exchange membranes that also do not require precious metals. As these solutions come to market, it will be beneficial to further assess how these products could help accelerate the adoption of hydrogen, particularly in less evident sectors like agriculture.