Research Brief
3704
There were four IPOs this year, including three in Australia, but there has been only one $1B+ exit in the space in recent years.

The steady pace of exit activity is unsurprising given the trends in deals and funding in the category. On a yearly basis, deal activity in HR tech increased steadily between 2012 and 2015, and has broken 100+ deals in each of the last 3 quarters in 2016. Deal count is on pace for a record annual total this year.

This analysis only includes first exits.

The peak year for HR tech exit activity globally was 2014, which saw 60 M&As and 4 IPOs. Consistent exit activity over the last few years is unsurprising given overall deal activity in the category. HR tech saw a surge in both deals and financing in 2014, then hit a new peak the next year, and is projected to surpass 2015’s record by 2016 year-end.

In total, 10 HR tech startups have gone public and approximately 241 have been the targets of M&A transactions since 2012. 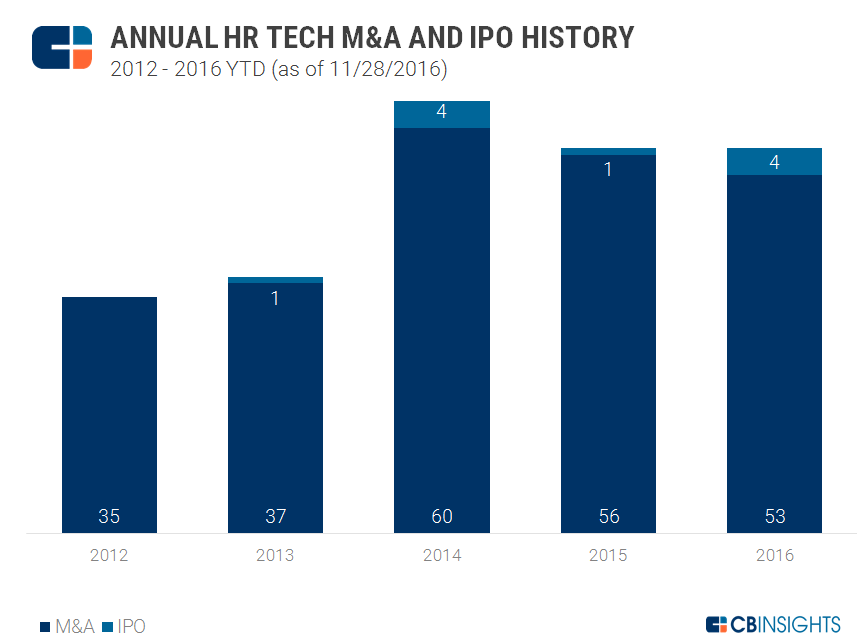 Based on disclosed funding, the most well-funded HR tech startup that has exited since 2012 is Elance.

Elance, a marketplace for freelancers, merged with HR tech startup UpWork Global in Q4’13. Prior to the merger, the company had raised approximately $94.8M in total funding. The company’s last round of funding was a $16M investment in Q1’12 from smart money investors Kleiner Perkins Caufield & Byers and New Enterprise Associates.

The second most well-funded company prior to exiting is PeopleMatter, a full-service HR management software for the services industry. The company was acquired by SnagAJob in Q2’16 and had raised approximately $60.6M in total funding.

PeopleMatter is followed closely by Bswift, a payroll and benefits software company, that was acquired by Aetna in Q2’16 after having raised $51M.

Notably, all of the companies on our most well-funded prior to ext list are headquartered in the US and 80% are VC-backed.

We used CB Insights’ Enhanced Valuation capability to identify the top HR exits since 2012. Despite this year’s strong performance in number of exits and record-tying IPOs, the last 14 months have not seen a top 10 HR tech exit.

Indeed claimed the top spot as the largest tech exit since 2010. It is the only company on the list that exited for over $1B+. Indeed was acquired by Recruit Holdings for up to $1.4B in September 2012.

Paylocity took second at a $832M valuation when it went public in March 2014; it is the only company on the list to IPO. Bswift came in third. It was acquired by Aetna in November 2014 for $400M.