Research Brief
3608
HR tech has seen 100+ deals in each of the last three quarters. NEA, Andreessen Horowitz, and 500 Startups are the most active VC investors.

At the current run-rate, 2016 deal count will surpass last year’s total, but may lag 2015’s dollar investment. Investors poured roughly $2.4B into HR tech companies in 2015 across 383 deals, and while investors haven’t invested at the same dollar pace this year, the increased deal count in 2016 suggests investors are still finding opportunities in the category.

Deal activity in HR tech has grown consistently in the last 5 years and at the current run-rate 2016 will see over 15% more deals than 2015.

However, 2015 funding was inflated by 3 later-stage deals that together represented nearly $750M in funding (or 30% of the total funding in 2015) including a massive $500M Series C to troubled unicorn Zenefits,  a $150M growth equity round to OneSource Virtual, and a $100M Series D to  FXiaoKe. 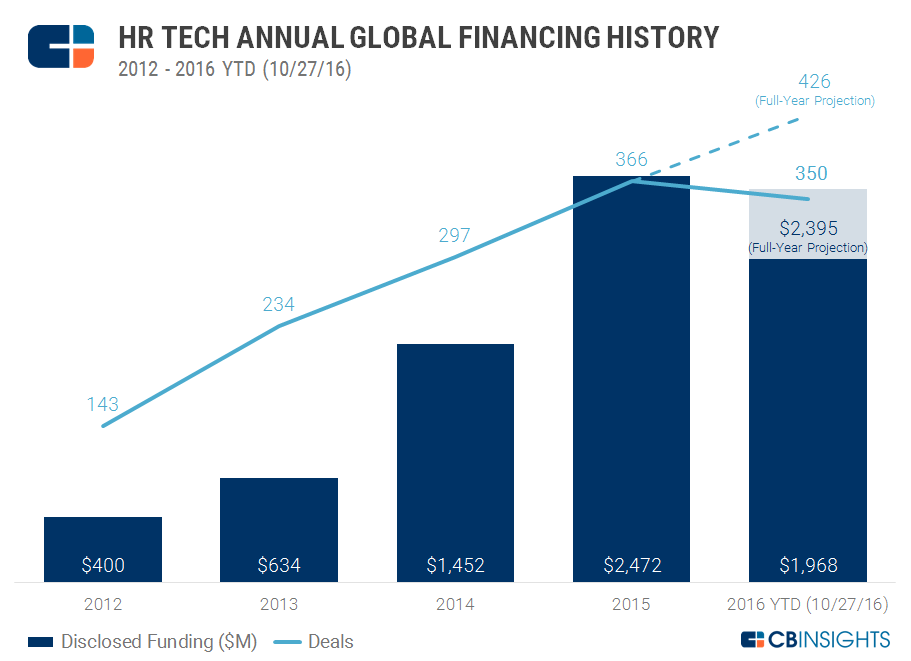 Looking at HR tech on a quarterly basis, trends mirror annual activity. Deals in HR tech took off beginning in 2014, started to decline in mid-2015, and then came storming back throughout 2016, with each of the last three quarters reaching higher deal numbers than any pre-2016 quarter.

Nearly 50% of total funding in 2015 was driven by Q2’15 deals, specifically 2 deals: the massive $500M Series C round to Zenefits and the $150M growth equity round to OneSource Virtual. 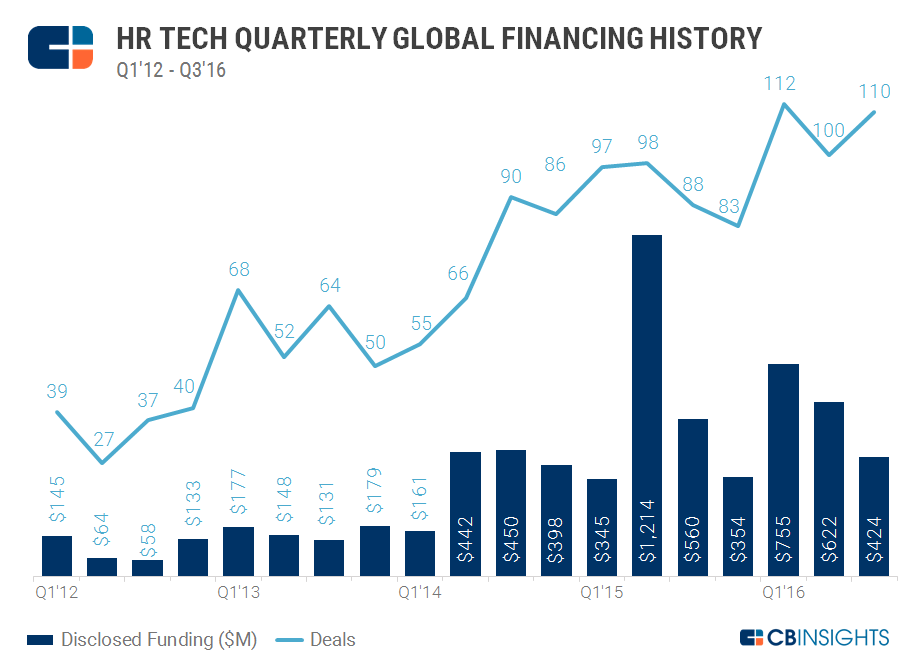 Although the number of HR deals annually has more than doubled since 2012, the distribution of investment stages has remained relatively static. Historically, roughly two-thirds of deals in the category are in early-stage deals (seed/angel and Series A), with this year seeing early-stage deals account for 69% of share to-date. Seed/angels deals have increased this year, compared to 2015, which is likely in line with the record for deals coinciding with a decline in funding.

Our “Other” category, which includes minority investments by corporates and convertible notes, has accounted for a steady 12-14% of deals. 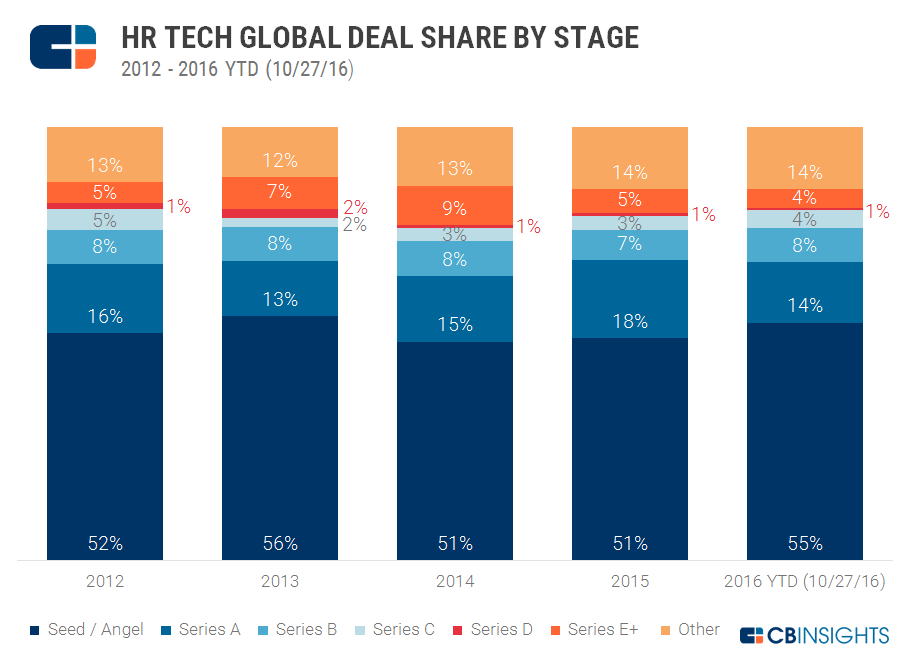 Dollar share has fluctuated much more significantly over the last five years. Mid-stage deals have taken from 20% to 47% share in dollar value. Much of that 47% spike — which came in 2015 — was due to Zenefits’ $500M Series C deal in Q2’15. 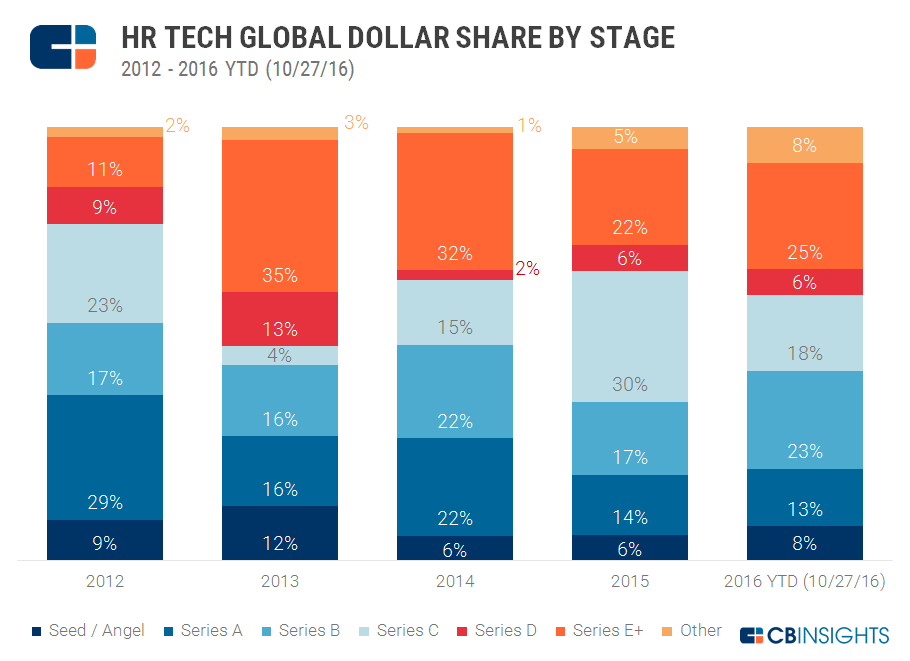 NEA claimed the top spot as the most active investor in HR tech companies over the last five years. The company’s most recent deal was a $7.5M Series B investment in LearnUp, a skills-based recruitment and training platform. Andreessen Horowitz and 500 Startups were tied just behind as the second most active investors.

The most well-funded HR tech company is Zenefits, having raised a total of $583M. The company was previously valued at $4.77B but the valuation was cut in half to roughly $2B to head off investor concern over the company’s compliance and regulatory issues. In an effort to show investors that the company has moved forward, Zenefits restructured the executive management team, went through a total corporate re-branding, and launched Z2 a new suite of HR services in October 2016.

Other well-funded companies include 2 other unicorns, Gusto and Liepin.  Gusto, a software company for benefits and payroll administration, launched a new suite of workforce management tools in October. Gusto has raised a total $176M in funding and is valued at $1B. Liepin, mentioned above, has raised $170M in total funding and the company’s last round, a $100M Series D investment in Q2’16, took the valuation to $1B. All of the companies on the most well-funded list have raised above $150M.