Research Brief
3625
Corporate involvement in deals to HR tech is on track to grow 33% over 2015. Salesforce Ventures and Google Ventures lead the pack in investments.

Corporate participation in deals to HR tech startups is at a record high, with 46 deals totaling $781M in funding in 2016 (as of 10/27/16). The number of unique corporate investors, including corporate parents and their venture arms, investing in HR tech startups has more than doubled in 2 years and is at a record high of 56 investors in 2016 year-to-date.

This growth in corporate investors and corporate venture capital (CVC) groups investing in HR tech parallels the growth of the corporate venture ecosystem as a whole, which we tracked in our semiannual CB Insights Corporate Venture Capital Report.

Corporations and their venture arms—including Salesforce Ventures, Google Ventures, and Comcast Ventures—have been participating in major deals to HR tech startups including $100M+ mega-rounds to Zenefits ($500M Series D), Ceridian ($150M private equity), and Liepin ($100M Series C). In 2016 year-to-date, deals backed by corporate and CVC investors made up 40% of total funding to the category, and 16% of total deals to HR tech companies.

Thus far in 2016, corporate and CVC investors have already participated in a record 46 deals to HR tech startups. At the current run-rate, corporate involvement is on track to see deals grow 33% over the previous year. Though deals are projected to grow, funding may fall short of 2015’s high. 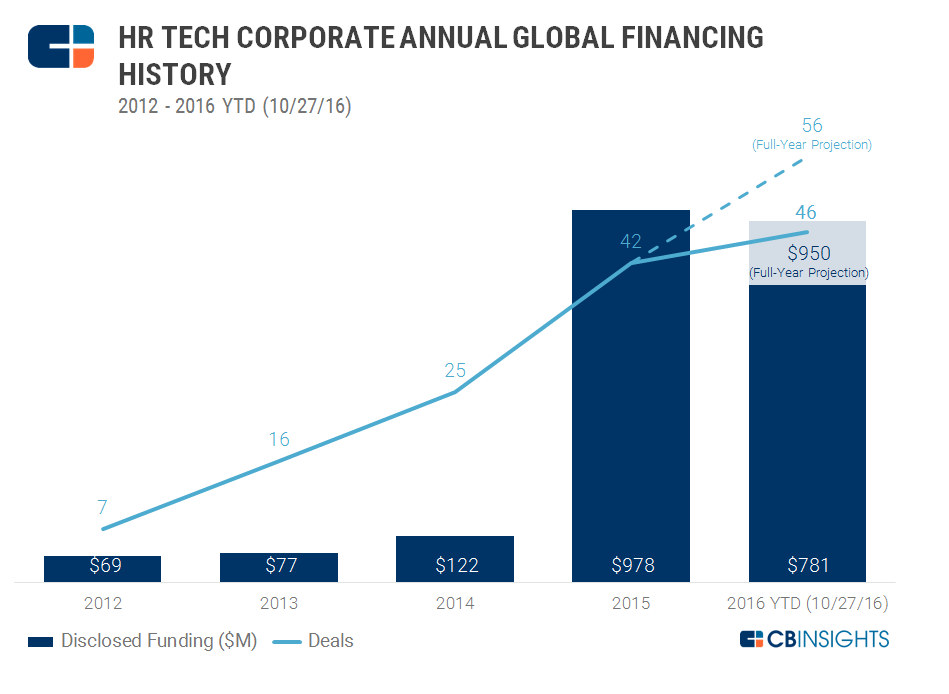 Drilling into the quarterly data, Q1’16 and Q2’16 were the top quarters for corporate-backed deals to HR tech companies, with 15 deals announced in each quarter. Q1’16 is the second most well-funded quarter for deals involving corporates, with $306M invested, falling short of the record set in Q2’15, when $678M was invested across 14 deals.

Two of the top mega-round deals year-to-date included participation from corporate investors. Ceridian, a payroll and benefits management software business, announced a $150M private equity investment led by Fidelity National Financial, and recent unicorn Liepin, a marketplace and recruitment platform for full-time jobs in China, announced a $100M Series D investment in a round that included China Mobile. Rounding out the top 3 corporate-backed deals in 2016 is FXiaoKe, a China-based software company that provides workforce optimization tools; the company raised a $70M Series E-II in a round that included retail giant Beijing Hualian Group. 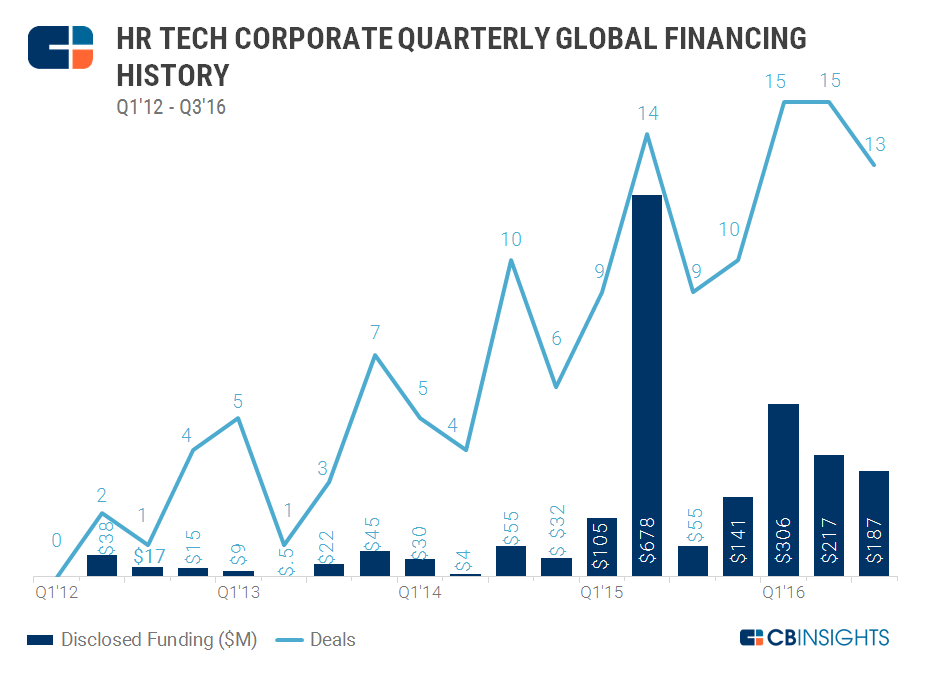 2016 is the first year that corporate-backed deals have been spread out among all deal stages with at least 1 deal in each investment stage. Corporate-backed investments were focused entirely on early and mid-stage deals in 2012 and 2014. Investments in late-stage and other deals picked up in 2015 and late-stage deals are up 4 percentage points in 2016 YTD compared to 2015. 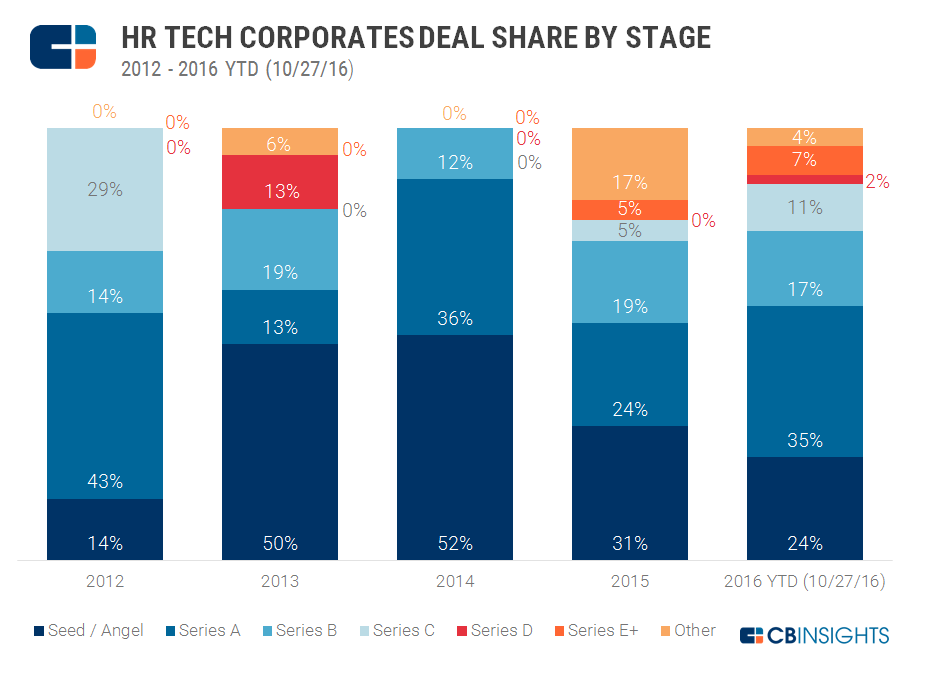 Corporates participated in 2 of this year’s 3 mega-round investments in HR tech startups and were a part of Zenefits‘ record $500M Series C investment in 2015. 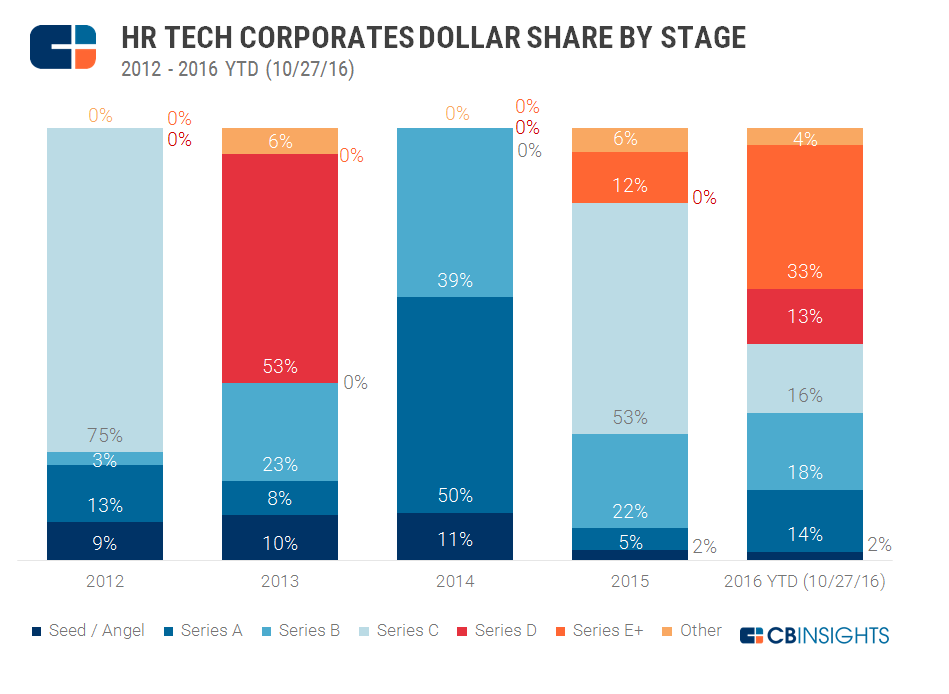 Salesforce Ventures is the most active corporate investor and has participated in deals to nearly 10 HR tech companies. Salesforce Ventures’ top investments include participating in a $32.8M Series A investment to BizReach, a Japan-based recruitment platform for executive hires, a $9.55M Series B-II investment to SmartRecruiters, a cloud-based recruitment platform, and an $8M Series B to Hoopla Software, an employee optimization software platform.

The next 2 biggest corporate investors in HR tech startups are Google Ventures and CyberAgent Ventures.

CyberAgent Ventures‘ top investments include participation in a $107M Series B investment to CrowdWorks, a Japanese marketplace for recruitment and placement of technical talent, a $1.4M seed-II investment to AnyPerk, a perks and rewards platform, and a $.68M seed investment to LiB, another Japanese recruitment platform.

70% of the most-well funded HR tech companies from our recent funding analysis received investments that included a corporate or CVC investor.

Comcast Ventures and Google Ventures are the only investors from the top corporates list that have invested in companies in the most well-funded list.