Research Brief
1287
As human capital management gets reinvented, both funding and exit activity to HR Tech have hit record highs. We dig into the data.

Companies are rapidly changing the way they manage their human capital. And these changes have spurred significant investment into the broadening market of HR tech, which has taken in over $2.3B in private investment funding since 2009. With the era of punch-in clocks and snail-mail resume outreach behind us, we used CB Insights data to dig into the technology-enabled tools ranging from automated workforce management systems to algorithmic job search services that are spurring the HR tech market.

This analysis provides an in-depth look at the HR tech financing and exit landscape as well as the investors and companies fueling the HR tech or human capital management startup ecosystem.

Before we dive in further, it is worth noting the following about this report:

After hitting a trough in 2010, HR tech companies have seen a massive rebound in financing to capture $564M in venture funding last year, an all-time high. Deal activity also reached an all-time high, almost doubling to over 200 deals in 2013. Some major deals in the industry last year include a $50M Series E round by online job and career forum GlassDoor, which included Tiger Global Management, Benchmark Capital, Battery Ventures, DAG Ventures and others, and a $25M Series D round by video-interviewing solution HireVue, led by Sequoia Capital. 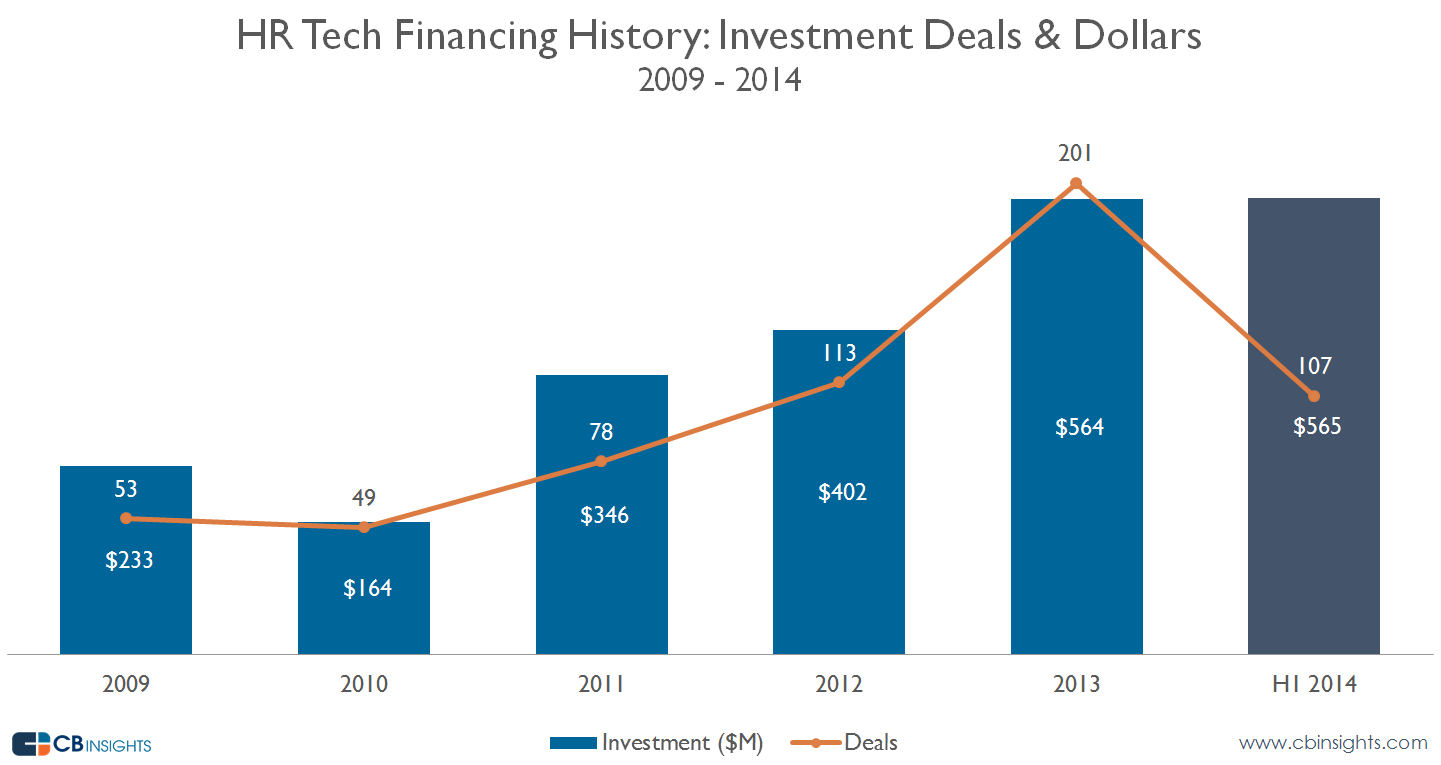 On a quarter-by-quarter basis, the data highlights an acceleration of deal activity since the latter half of 2012.  On a funding basis, 2014 has already hit new highs with funding through August already exceeding aggregate funding for 2013. The tremendous surge in 2014 comes as the result of several mega-rounds, including a $70M Series C round by China-based recruitment website Liepin.com, a $67M Series B raise by employee benefits solution Zenefits (at a $500M valuation).

Though industry funding levels by stage have been erratic in the past several years, there has been a rise in early-stage (Seed/Series A) funding since 2011 driven by a number of investors jumping into the market. Early financing took in 40% of all HR tech investment dollars in 2013, up from 25% two years prior, mostly on account of growing seed-stage investment. However, the majority of funding to HR tech companies has historically been in the middle (Series B/C) and late (Series D+) stages as might be expected given those later rounds are where the more serious amounts of capital are deployed. In the first half of this year, mid-stage funding accounted for 66% of all funding dollars on account of large rounds by Liepin.com and Zenefits. 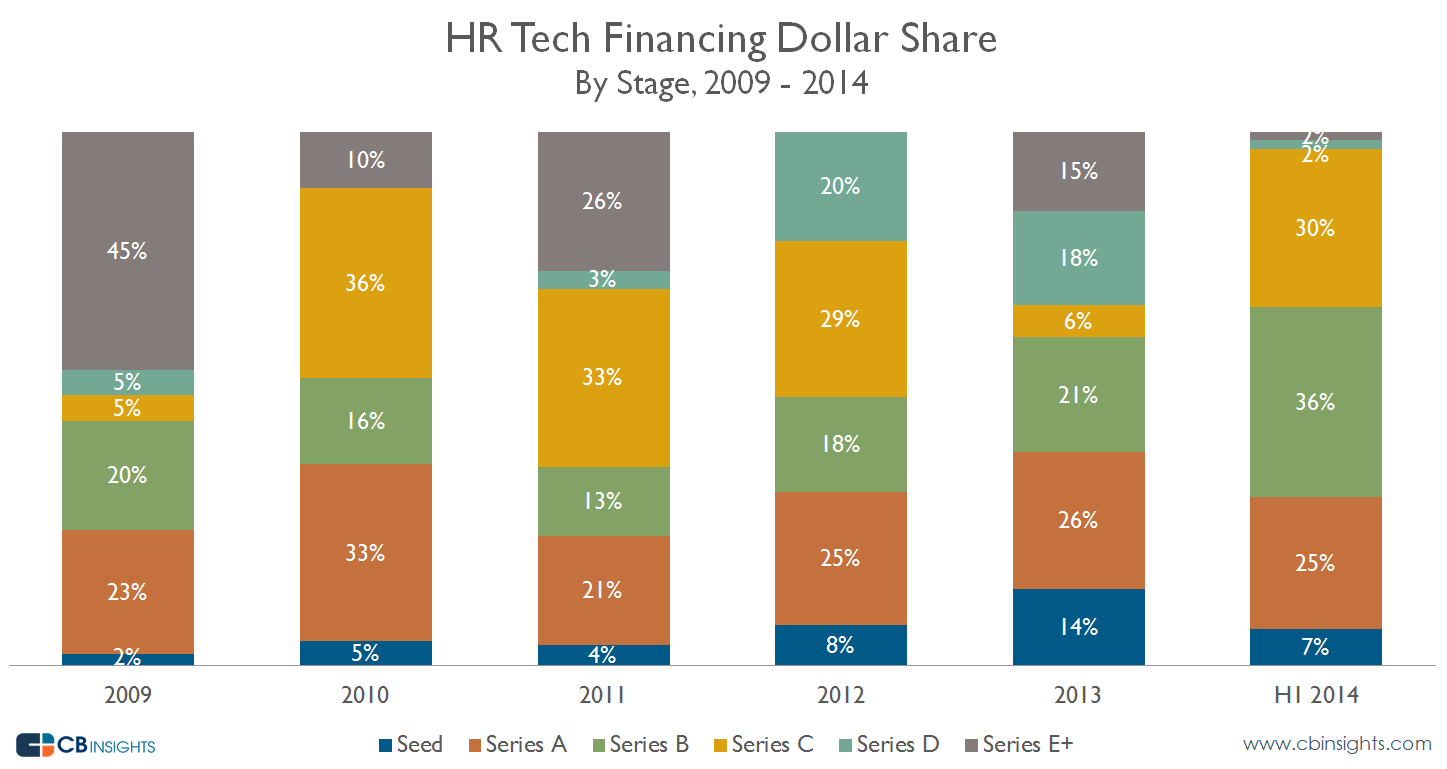 Breaking down industry funding by deals paints an entirely different picture as might be expected with early-stage rounds taking the majority of HR tech deals despite comprising a smaller proportion of total funding. Since 2009, the average early-stage deal size stands at $2.2M. Mid and later-stage rounds grow in size markedly coming in at $9.1M and $20.2M, respectively. 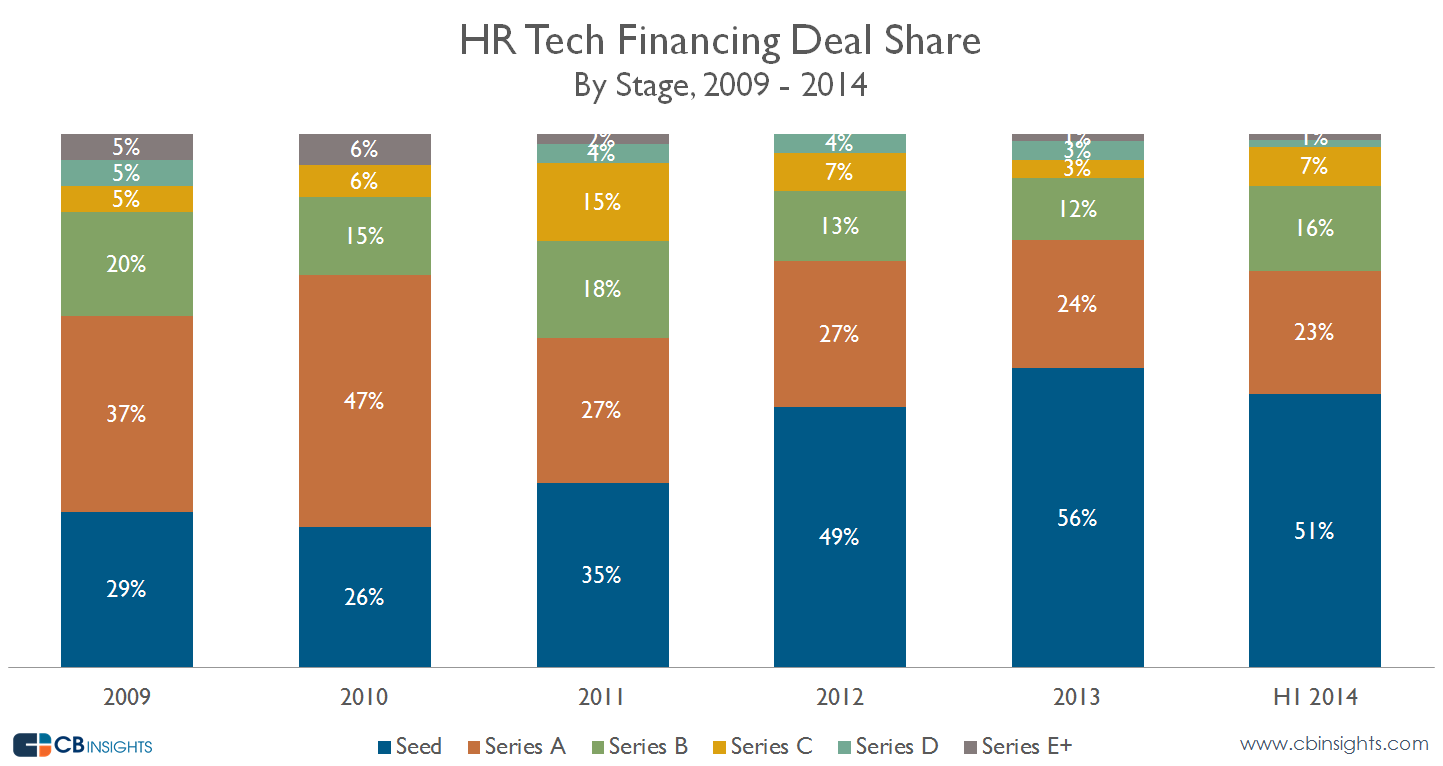 California, New York,and Massachusetts round out the three most active states for HR tech funding mirroring where tech venture investment tends to be centered. California-based HR tech startups have seen 154 funding deals since 2009, compared to 108 deals in New York and Massachusetts combined. Some of California’s biggest investment funding winners include full-service HR provider Workday (public since 2012), Zenefits, and GlassDoor.

The United States led HR tech investing activity by a wide margin, followed by Canada and the United Kingdom.

The Most Well-Funded HR Tech Startups

Elance, which comes in second on our list with $95M in aggregate funding, specializes in cloud-based staffing solutions and virtual workplaces. Both Kleiner Perkins and New Enterprise Associates are long-time investors in the company. Online career forum Glassdoor has raised over $90M with extensive investment from Benchmark Capital and Battery Ventures.

Of the companies below, Wan Shi Dao and CloudPay are the only HR tech companies based overseas in China and the UK, respectively.

Given the data on overall investment activity, 500 Startups also tops our list of most active early-stage HR tech investors. Some of its most recently funded companies include TraitPerception last month and WUZZUF in February. Interestingly, all but one of Andreessen’s investments in HR tech were in the seed-stage as well (the other was in a Series A round), which may hint at the firm’s confidence in the industry’s future.

Google Ventures is the only corporate venture arm to appear below, and all of the VCs below are based in the United States.

HR tech exits are down slightly from reaching a high in 2012, with 45 exits last year. However, 2014 is already set to be a breakout year for the industry, with 82 exits already on record through August. The vast majority of exits continue to be trade sales aka via M&A.

Want to track HR tech companies, their financings, exits and investors automatically?  Sign up for a free trial to CB Insights below.