Research Brief
2505
Deals also leapt in the year. Rounds to Zenefits, OneSource Virtual, and FXiaoKe accounted for a big chunk of funding. a16z and 500 Startups are the most active investors in HR tech.

HR tech is a hot category, with both funding and deal activity leaping to new highs in 2015. However, when taking a closer look, $100M+ mega-rounds to Zenefits, OneSource Virtual, and FXiaoKe took a large portion of total funding in the year, making up roughly 30% of investment in HR tech in 2015.

Funding growth aside, deal volume also increased significantly in 2015 reaching close to 400 deals, when 2014 had ended at under 300 deals.

Total funding to the space in 2015 hit $2.4B across 383 deals representing 62% growth in funding over the total in 2014. When comparing 2015 to 2011, funding totals grew 8x in the period, climbing 707%. Despite impressive growth, 2015 funding was buoyed by three deals that together represented $750M in investment, or 30% of total funding for the year. Those deals were the $500M Series C to Zenefits, the $150M Growth Equity round to OneSource Virtual, and the $100M Series D to China-based employee management platform, FXiaoKe. 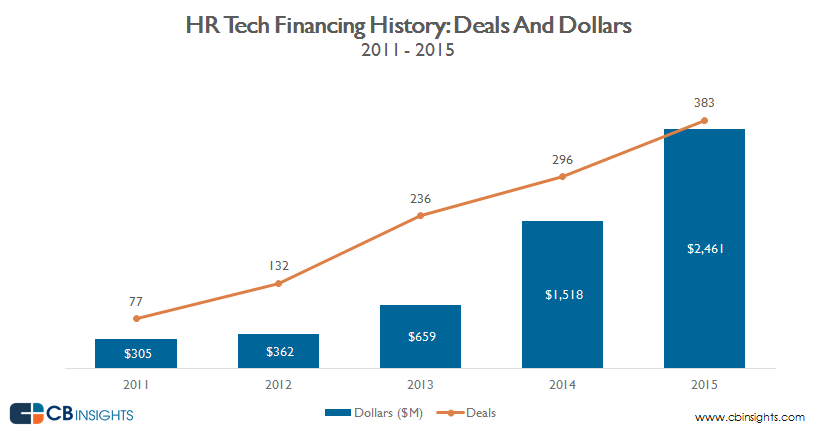 The quarterly trends echo the annual growth seen in the previous chart, but also reveal a drop-off in funding toward the end of 2015. After reaching an all-time high of $1.18B in funding in Q2’15, quarterly funding totals declined to just under $400M in Q4’15.

Deal volume remained strong in Q4’15 at 91 deals, with the last 6 quarters all reaching 80+ deals to HR tech companies. 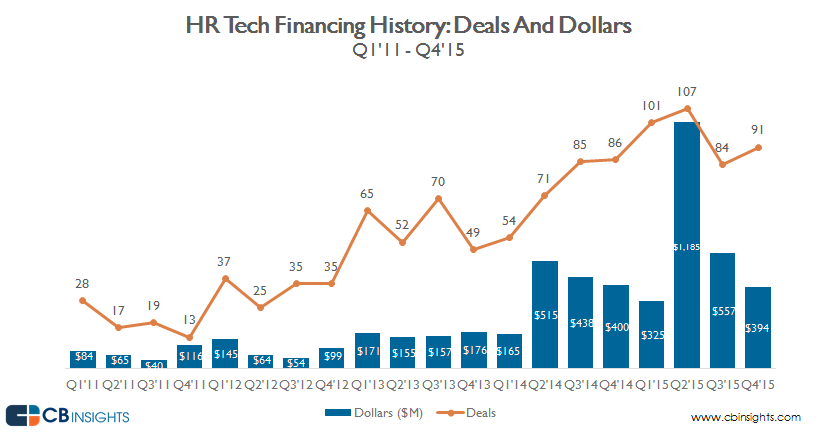 HR tech deal share skews towards the early-stage (seed/Series A) deals with 3 of the last 4 quarters seeing these stages account for at least 65% of deal share. Mid-stage accounted for 9% to 19% of deals over the past five years while late-stage deal share made up between 6% to 10% of HR tech deal share.

There was an increase in deals classified as “Other” in 2015, which includes convertible note funding and minority investments by corporations who are increasingly active investors in the startup scene generally. 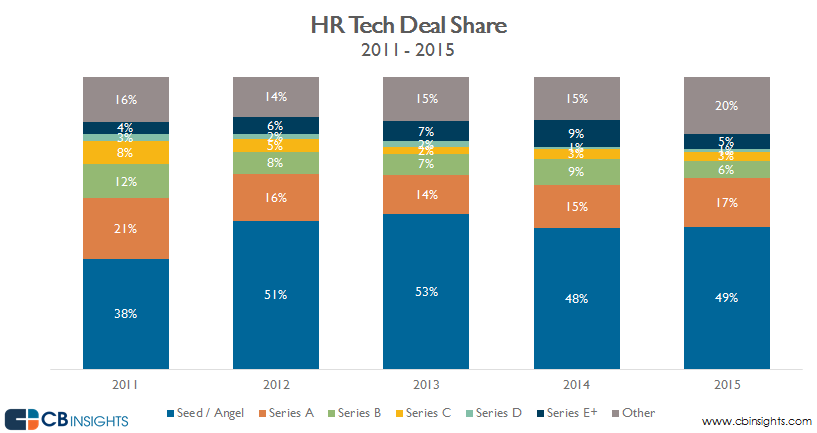 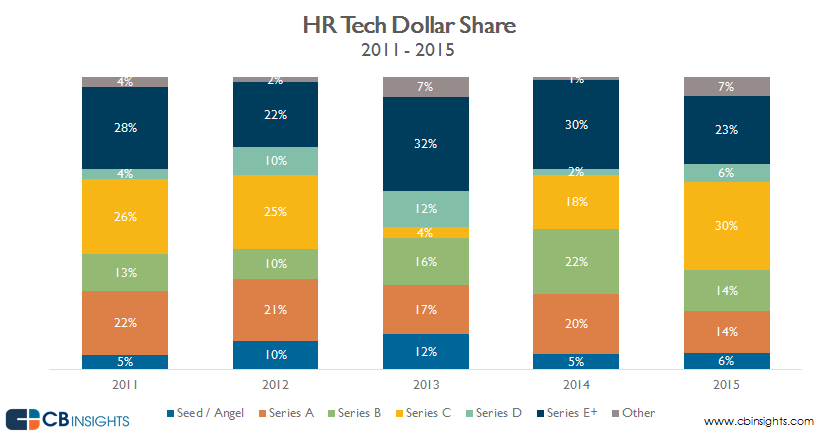 Perhaps the most well-known HR tech company in this analysis is Zenefits (the company was in the news early in 2016 after its CEO Parker Conrad resigned following irregularities in how the company complied with regulations). Zenefits raised a $500M mega-round led by Fidelity in May 2015, and has raised over $580M to date. The top 3 list is rounded out by less well-known HR tech companies like the aforementioned OneSource Virtual (a Texas-based provider of HR solutions built on the Workday platform) and FXiaoKe. Check out the top 10 list ranked by total disclosed funding below.

Andreessen Horowitz tied 500 Startups as the the most active HR tech VC investor over the past 5 years. A majority of Andreessen’s deals are happening at the early-stage, and it’s worth noting their largest investment position is in HR tech company Zenefits. NEA is also an active VC investor in HR tech, rounding out the the third spot.